The Benda BD500 is currently only available in China, where it is more powerful, but also much heavier, than some of its middleweight cruiser rivals.

The Chinese manufacturer Benda has launched the first motorcycle to use its new 500cc engine.

The Benda BD500 is a cruiser, powered by the new 496cc V4 of the Chinese manufacturer that was unveiled last year, when it was given the name “BD453.” It was not the only V4 presented by the Chinese brand, as there was also an 1198cc called the “BD476”. 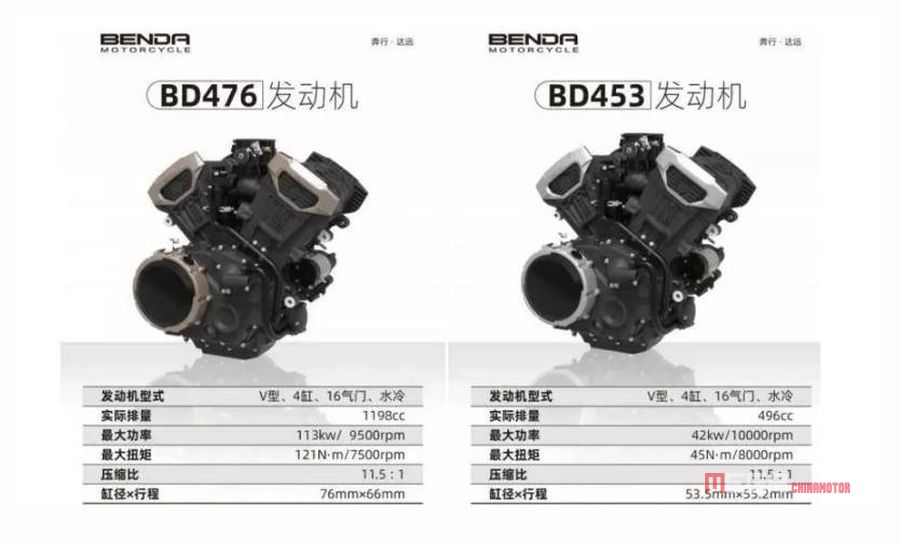 Obviously, the BD476’s additional displacement gives it more power, but the BD453 used for the new Benda BD500 – that for now, at least, is on sale only in China – still puts out respectable numbers.

55.5 horsepower is squeezed from the 500-class, mid-capacity V4, as well as 45Nm according to Bikes Republic, who also note that the Honda CMX500 Rebel is 10 horsepower down on the BD500.

They also note, though, that the Rebel almost 60kg lighter than the Benda, which weighs a relatively large 241kg.

Supporting that weight are USD telescopic forks at the front, and a pair of shock absorbers at the back. Single discs front and rear (fitted to 17-inch wheels) will get all of that 241kg (plus fuel and rider) stopped from a top speed that Le Repaire des Motards reports to be 190kph, or 118mph.

Like all cruisers, the Benda BD500 takes its visual cues from the traditional American designs. It sends both the front and rear exhausts into a single can with a flat outer-edge, and from front-to-back features a swept-back stance. Coupled with the fat tyres, low seat position and curved rear mudguard around the shape of the back tyre and the American-esque look is complete.

It is important to note, though, that this is no more American-inspired than the aforementioned Honda Rebel, or a Triumph Rocket, for example. It would be false to claim this is another Chinese motorcycle ‘ripping off’ the designs of an established ‘Western’ manufacturer.

For now, there are no prices for the BD500 released by Benda, and its market for now is strictly the domestic one of its manufacturer. That means that, for now at least, we have to view it from afar, but perhaps it will arrive internationally in the future, and perhaps with a 1200 variant.