New Chinese Bike Could Be Preview Of 350cc Harley Model 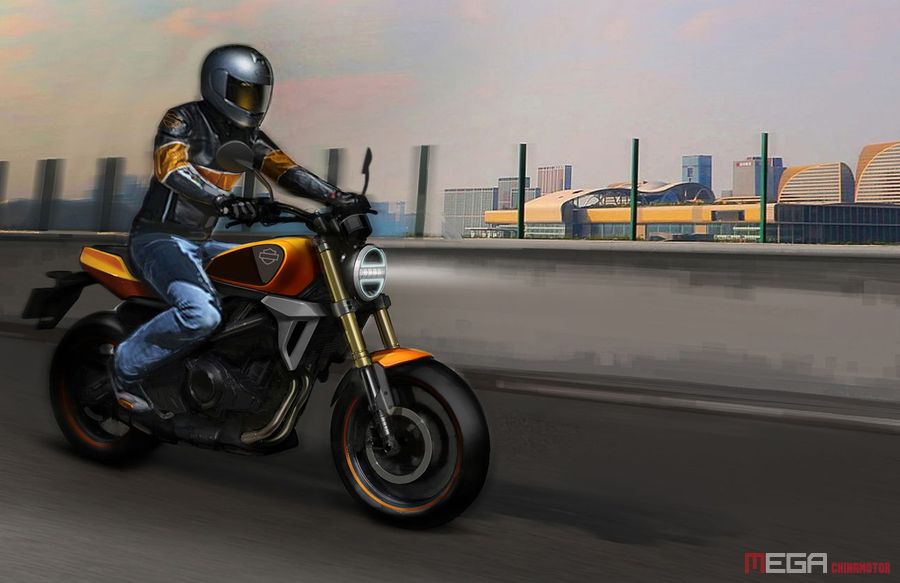 Harley-Davidson’s “More Roads to Harley-Davidson” plan launched in 2018 included introducing a host of bikes in new market areas for the firm, but one of the most intriguing designs was for the small-capacity parallel twin being jointly developed with China’s Qianjiang—owner of Benelli and several other brands.

Initially, Harley said it would “launch a 250–500cc motorcycle within two years” with a specific target being India and Asian markets. In June 2019, the firm elaborated on the plan, announcing its collaboration with Qianjiang in China and promising to “co-develop a premium 338cc displacement Harley-Davidson motorcycle for sale first in the Chinese market with additional Asian markets to follow.”

Styling drawings of the bike, released in June last year, appeared to confirm that the machine would be a derivative of the Qianjiang-built Benelli 302S, which featured an identical chassis and swingarm to that shown in the Harley designs. The 338cc capacity could also be achieved by combining the cylinder bore of Benelli’s 500cc twin with the short-stroke crank used in the 300cc version.

More recently a leaked image showing Benelli’s new model development and launch plan for the year revealed that the HD338 was due to appear in the middle of this year—or any time now, in fact.

While the small Harley-Davidson hasn’t reared its head just yet, another new bike based on the same components has just appeared in leaked Chinese documents.

However, rather than using a 338cc version of the Qianjiang parallel-twin engine, it features a newly developed 353cc design. That meshes neatly with the fact that in December 2019 the firm officially signed off on the project at a ceremony in China, at which the original HD338 name wasn’t used; instead the bike was referred to as the “HD350 Project,” which hints at a slight capacity increase.

The new bike that’s revealed in the official Chinese documents is the QJ350-13, and appears to wear the logo of the new QJMotor brand. QJMotor is Qianjiang’s newly launched “high-end” brand for the Chinese market, built around restyled, re-engineered, and higher-spec versions of existing Benelli designs. The firm has already launched its first bike, the SRK600 four-cylinder roadster, and will soon unveil the similarly engined SRG600 sportbike and SRB750 adventure models.

According to the documents, the new 350 uses a 353cc parallel twin making 36 hp. That’s actually 2 hp less than the 300cc Benelli 302S achieves, but the larger 353cc engine, which is externally identical, is likely to be both torquier and cleaner. There’s a strong chance the engine, and maybe even the QJ350′s styling, will also appear in a new Benelli 352S model for Western markets.

The new bike’s frame and swingarm are unchanged compared to the Benelli 302S and the earlier HD338 design drawings, but the new QJMotor gains much sharper styling to accompany its larger engine. The H-D version’s bodywork will be much more traditional, with flat track-inspired looks as seen in the firm’s design sketches.

Now however, Harley’s “More Roads to Harley-Davidson” plan for the future has been thrown into some disarray by the departure of former CEO Matt Levatich. His replacement, Jochen Zeitz, has since announced another new strategy—dubbed “The Rewire”—that has yet to be padded out in full but appears to drop some elements of that original “More Roads” plan.

However, the partnership with Qianjiang is still current, and the “Rewire” plans do make mention of intentions to “develop and maintain a productive relationship with Zhejiang Qianjiang Motorcycle Co., Ltd. and launch related products in a timely manner.”

If that’s the case, the HD350 is due to make an official appearance in the near future, potentially opening the brand to the developing consumer market in Asia that might one day be in a position to buy vast numbers of Harley’s bigger, more expensive machines.SOURCE:(New Chinese Bike Could Be Preview Of 350cc Harley Model)