1. With the implementation of the new national standard, electric vehicles have entered a new stage of development

E-bike is one of the most original and innovative products with Chinese characteristics since China’s reform and opening up. It is a national industry that is environmentally friendly, beneficial to people’s livelihood and has a high degree of independent property rights. It conforms to China’s basic national conditions and has great development potential. Since the first light electric vehicle was introduced in 1995, e-bikes have become an important means of transportation for Chinese residents.

2. Tianjin, Jiangsu and Zhejiang are the major e-bike industrial clusters in China

The most prominent feature of China’s e-bikes is the regional characteristics. Currently, Tianjin, Jiangsu and Zhejiang are the major e-bike industrial clusters in China. 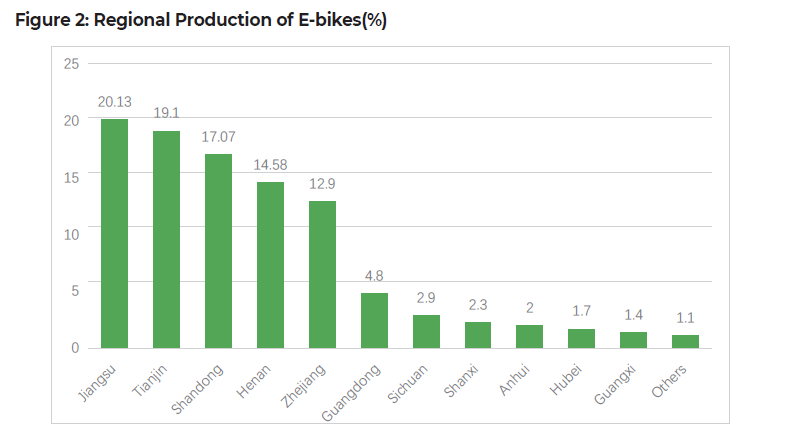 In addition, the sale of e-bikes also presents regional characteristics. According to the analysis of the development status of the EV industry, Shandong, Henan, Jiangsu, Zhejiang, Hebei and Anhui are the main markets. Among them, Henan, Shandong, Jiangsu and Zhejiang markets are the early, traditional sales regions, while Hebei and Anhui are the two emerging regions of rapid development in recent years.

In southwest China, Guangxi, Yunnan, Sichuan, and Guizhou have gradually become an important market of e-bikes due to the increase of residents’ purchasing power and the improvement of e-bikes’ gradeability and middle-range cruising capability.

3. The number of electric bikesin use in China is soaring

With the steady development of China’s e-bike industry, the number of e-bikes registered and being in use has been rising steadily. According to the Report on the Quality and Safety of China’s E-bikes released by the National Quality Supervision and Test Center for Bicycles and E-Bikes and the China Bicycle Association on March 15, 2017, the number of e-bikes in China had exceeded 300 million by the end of 201 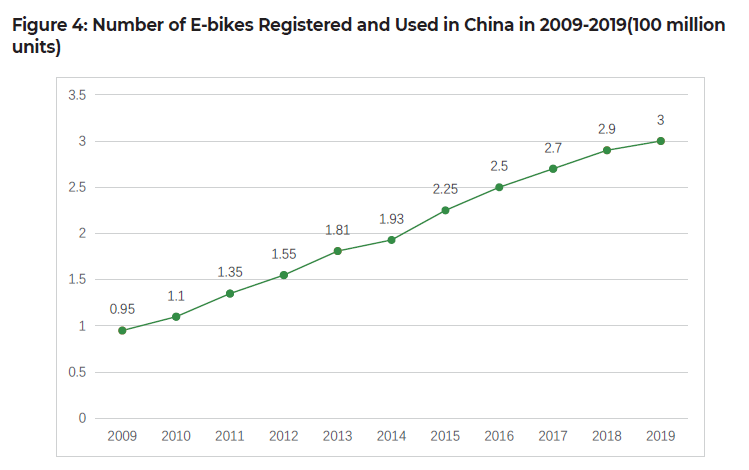 So, who are using so many e-bikes? According to the data released by ZOL, users from 30 to 39 years old have become the absolute main group, accounting for 47%, followed by users of 40 to 49 years old. Therefore, the current users of electric vehicles are mainly people born in the 1970s and 1980s, while those born in the 1990s and 2000s account for a relatively low proportion.

Driven by high-quality enterprises, China’s e-bike industry gradually matures. It is developing towards cluster, scale and technology oriented. With improved quality and more diversified products, the leading and brand enterprises will have a broader market space. From 2012 to 2019, the main business income of large-scale e-bike enterprises showed an upward trend, reaching 128.69 billion yuan in 2019. In addition to the soaring revenue, e-bike production also resumed growth in 2017. According to statistics from the Ministry of Industry and Information Technology and the China Association of Automobile Manufacturers, e-bikes ranked second in the production of transportation vehicles in China in 2018, accounting for 22%, second only to two-wheeled bicycles, becoming a large-scale manufacturing industry in production volume in China’s transportation vehicle manufacturing sector. 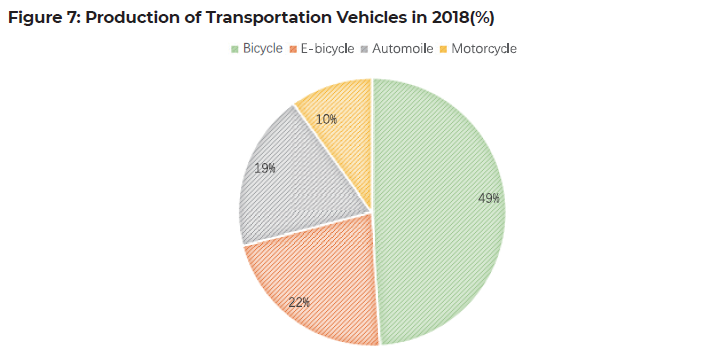 According to the data from the National Bureau of Statistics, the output of e-bikes is increasing year by year. The national output of e-bikes increased from 290,000 units in 2000 to 36.95 million units in 2013, with an annual compound growth rate of 34.21%. During this period, the industry activity reached the highest level and the technical level of the industry was greatly improved.

As the industry matures, it has gradually entered the stage of integrated development, and the industrial capacity increased in the high-speed development stage also needs to be gradually digested. From 2014 to 2017, the output of the e-bike industry declined slightly.

Growth resumed in 2018-2019. In 2019, the national output reached 36.093 million, a slightly rise year-on-year. Reasonable control of the output of e-bikes will be a new normal for future development of the industry. The growth in number will gradually give way to qualitative improvement. By the end of April this year, China’s output of e-bikes was 6.445 million, down 4% from the same period in 2019. 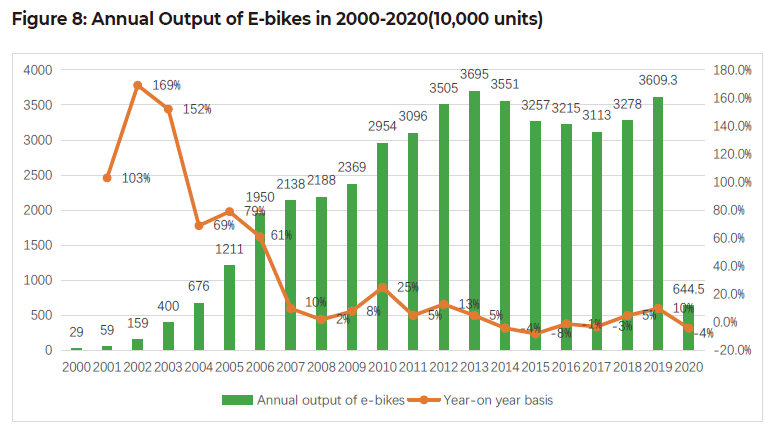 Of course, not all of the e-bikes China produces are consumed in China. While striving to explore the domestic market, many Chinese e-bike brands are actively tapping foreign markets.

In foreign countries, e-bikes are mainly for short-distance mobility and exercise, which can be used in large parking lots, supermarkets and tourist areas. As consumers around the world gradually deepen their understanding of e-bikes, the e-bike industry generally has a good prospect worldwide.

In 2019, the US’ 301 Provision and the EU’s anti-dumping policy (executing anti-dumping duties on Chinese exports of electric bicycles) have affected Chinese exports of bicycles, especially electric bicycles. Thus, many enterprises are shifting production to Taiwan, Southeast Asia and Europe. According to data released by the China Bicycle Association, 1.453 million electric bikes were exported in 2019, down 22.6% year on year. 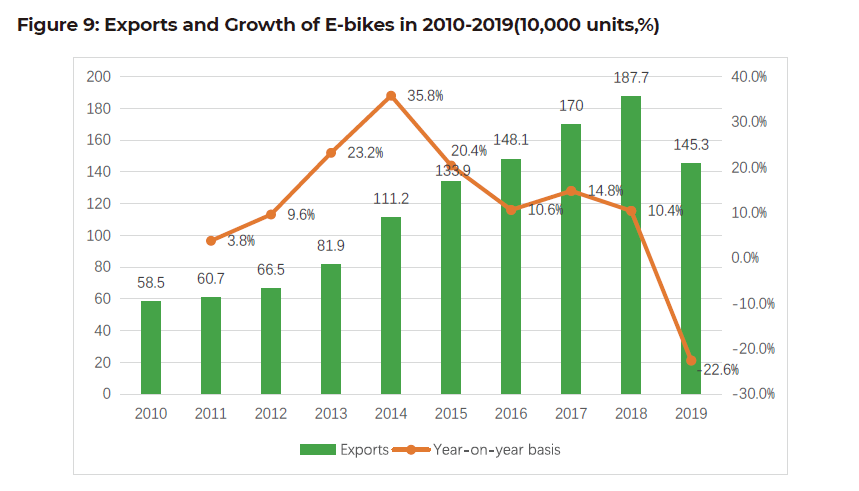 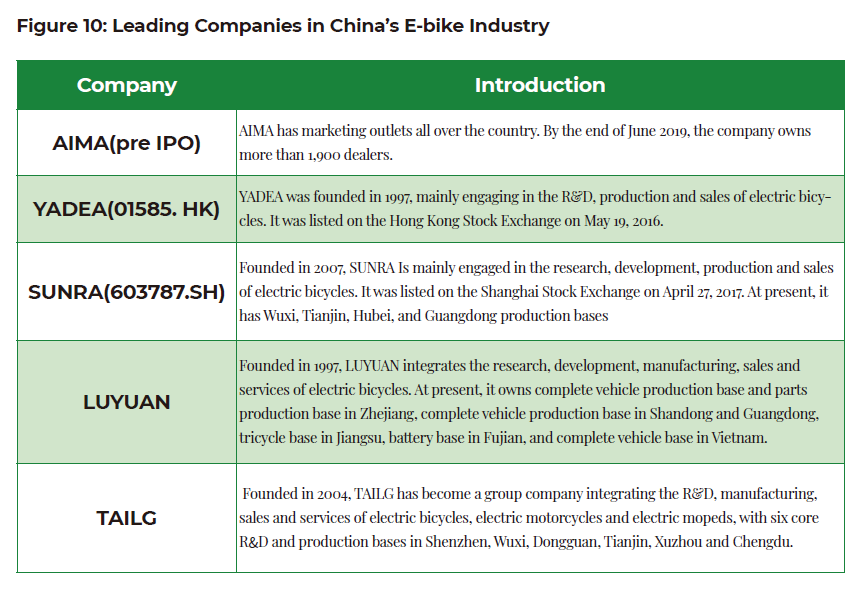 From 2016 to 2019, the listed (pro-listed) companies in the electric two-wheeled vehicle industry, such as NIU, SUNRA and YADEA, saw stable increase in sales, indicating that the industry concentration is accelerating. In absolute terms of sales, SUNRA, AIMA and YADEA all sold more than 3 million units, with YADEA breaking mark of 6 million units in 2019. 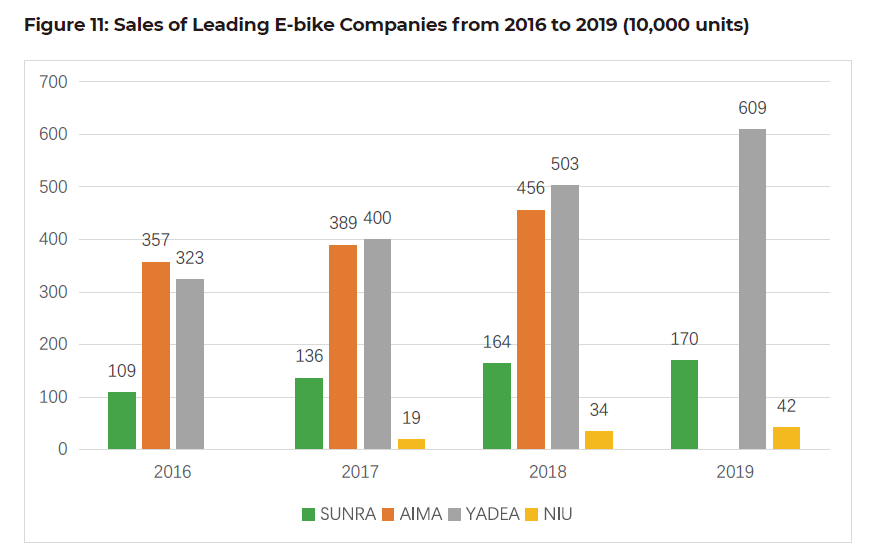