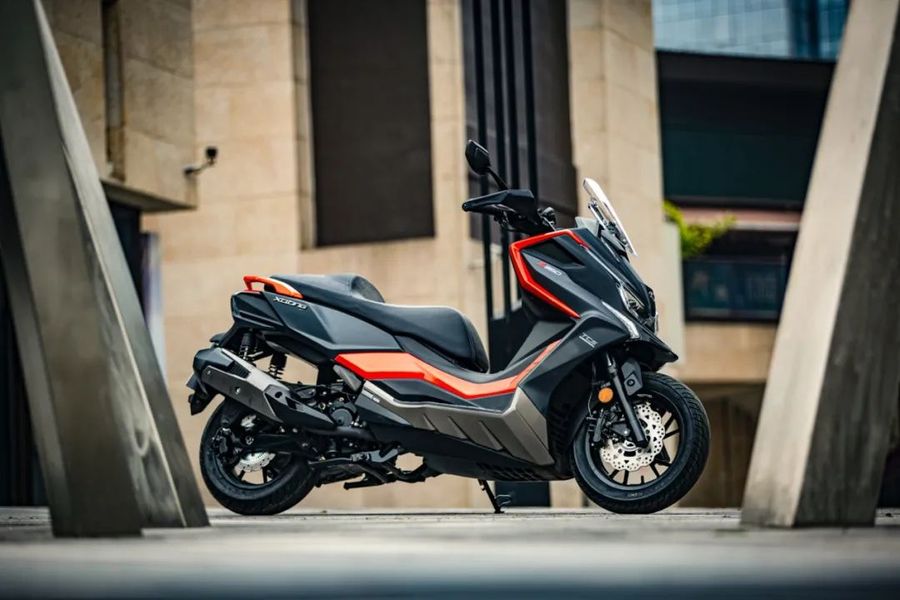 XCITING S350 is definitely a highly anticipated model in 2021. 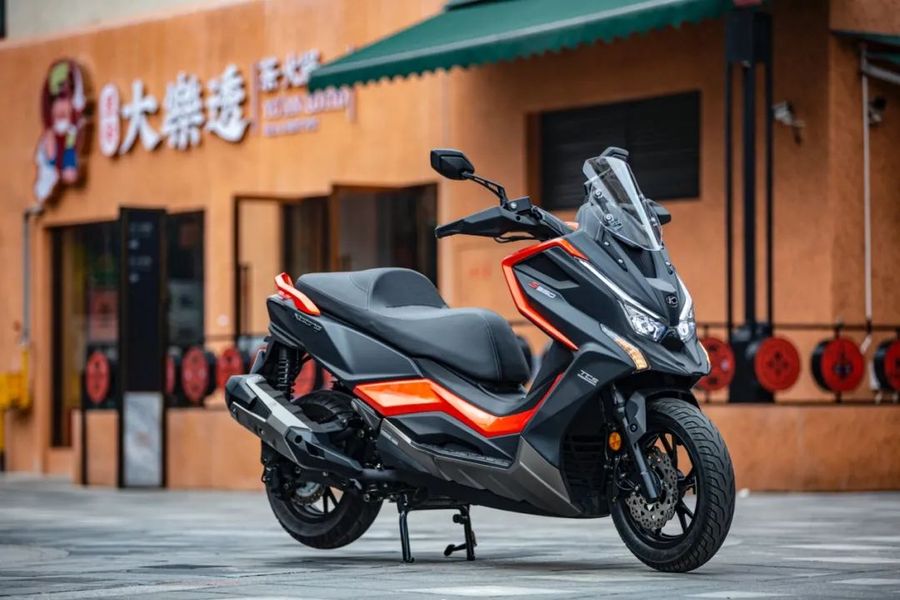 XCITING S350 has the appearance of an adventure scooter, adding ADV elements such as a beak face, small windshield, and handlebar guard. With tough straight lines, it takes on an adventurous look. The appearance was created by the chief designer of KYMCO and the chief producer of Phillips (Italy). The difference between the Chinese mainland version and the Chinese Taiwan version (DT X360) is mainly in the color scheme and the tire. 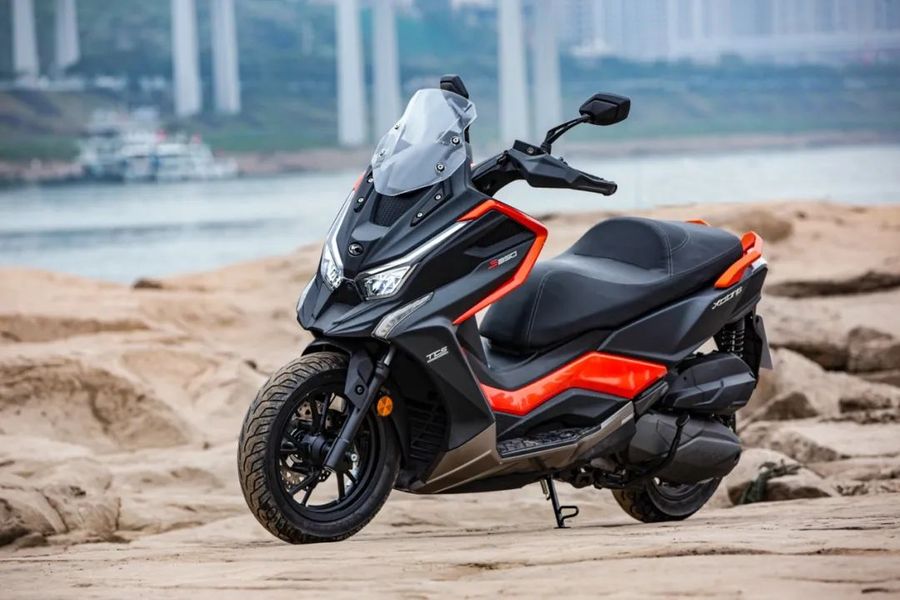 XCITING S350 uses the 320.6cc single-cylinder water-cooled four-valve engine, with a maximum power of 21.2KW and a maximum torque of 29.5N·m. Other equipment includes TCS (optional), keyless start system, full LCD screen, and all LED lights. XCITING S350’s high-standard equipment is only inferior to the flagship model AK550 among all KYMCO models. 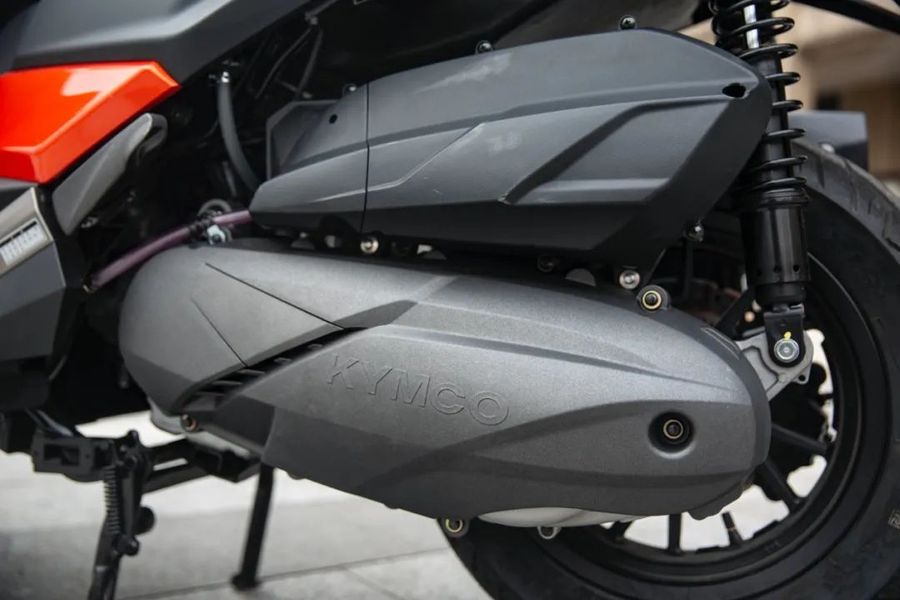 With the popular ADV look and high-end equipment, XCITING S350 has been very popular since its launch. 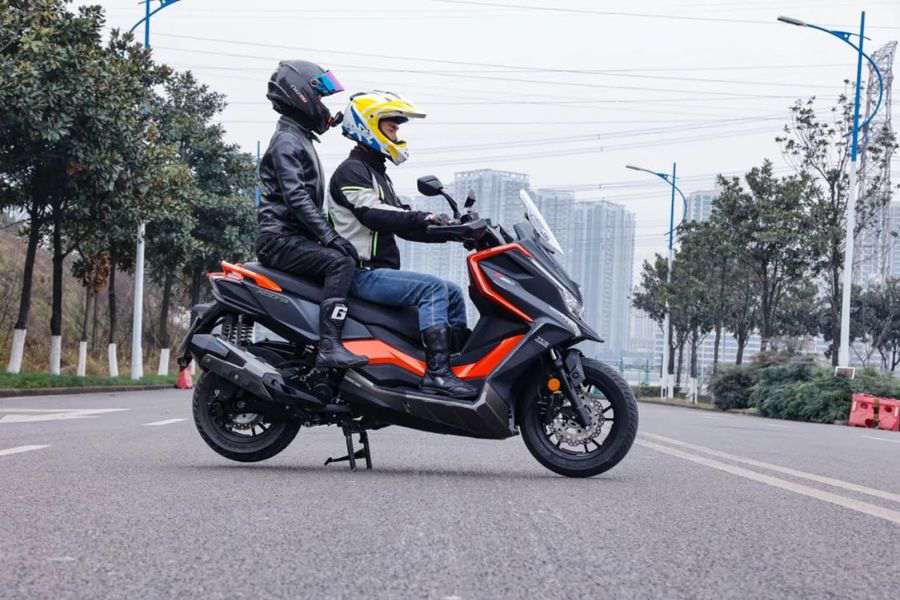 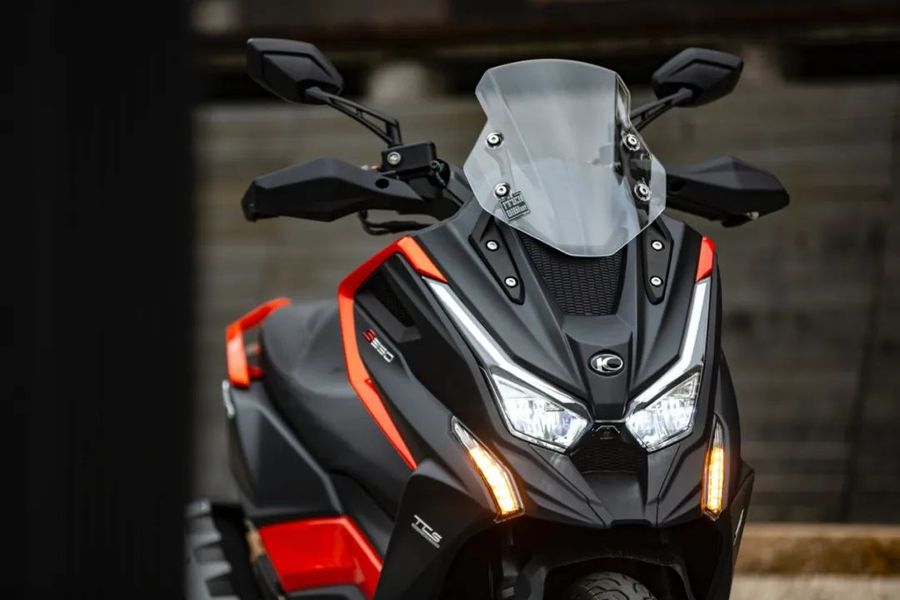 The headlight still inherited the family elements, but with a more solid and sharp look. 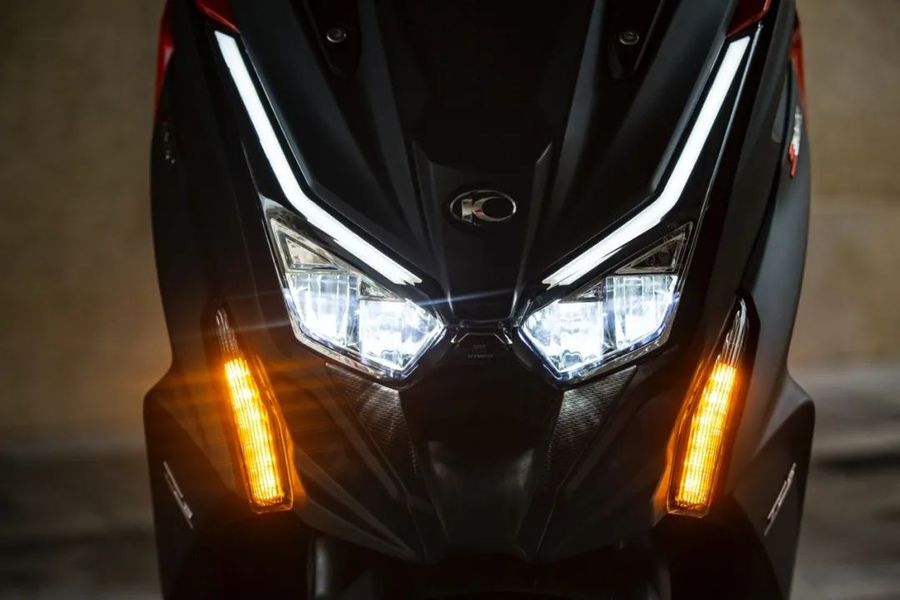 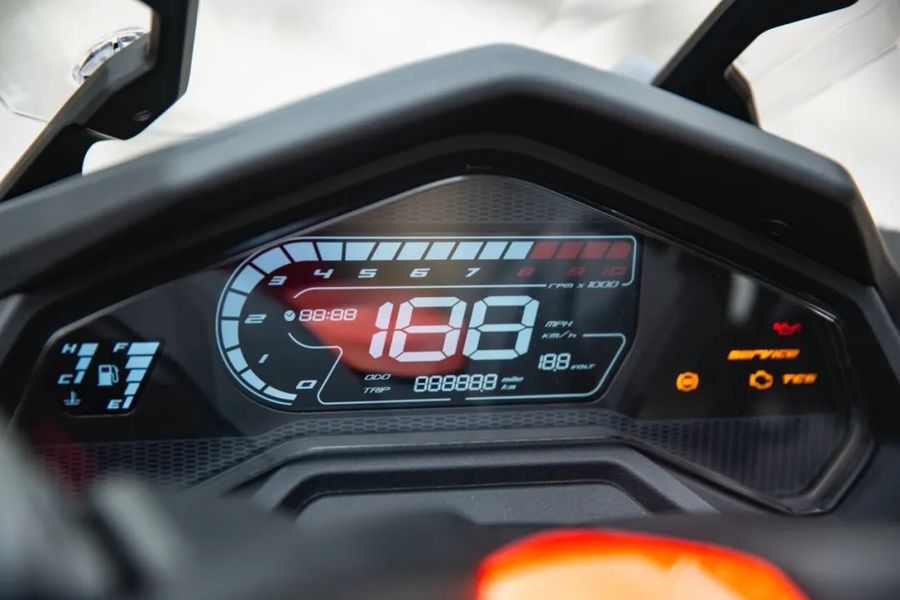 Intuitively, the handlebar of XCTING S350 is longer than that of XCITING 300. The optional TCS which is on by default and can be turned off through a handlebar button.

The keyless start system, operated by tuning knob, is unlocked by pressing the ignition switch. The fuel tank and seat can also be opened through the knob. The saddle is comfort and the rider’s seat is 785mm high. There’s plenty of room under the seat to easily hold a full-face helmet. The taillight with a unique style is different from the previous “X” shape. The polygonal LED light in the middle is on all the time, which is irrelevant to the brake light. 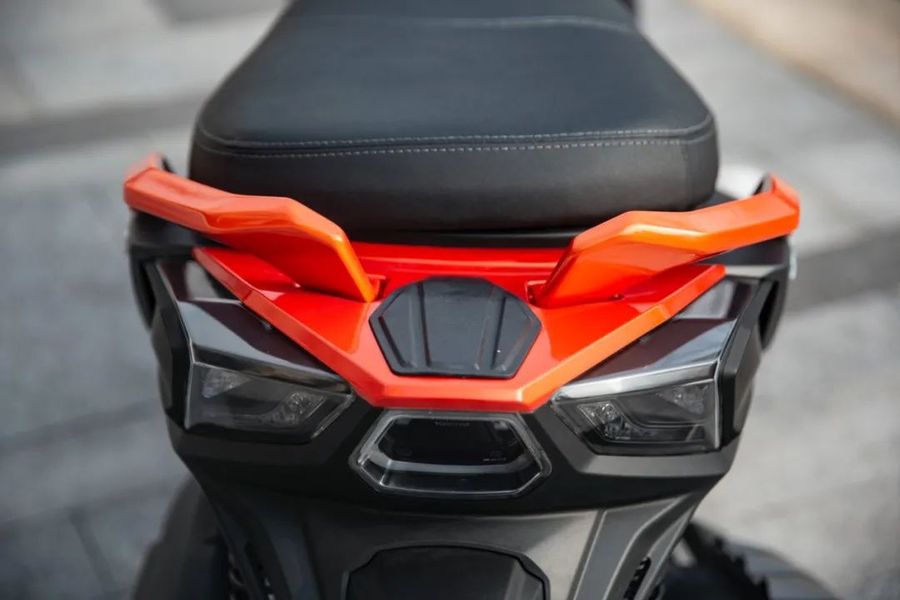 The newly built ADV scooter is designed with about 400 special parts. XCITING S350 is a big breakthrough for KYMCO. The sitting posture is very comfortable. A 170cm rider with the weight of 60kg can easily touch the ground by both feet, with abundant space for the legs. The backrest of the seat is comfortable. Coupled with the two-piece front pedal, it is suitable for a long-distance ride.

The exhaust noise is deep, and idling vibration is not obvious. The throttle response is positive, light and sensitive. The maximum torque of 29.5N·m is achieved at 5,750rpm. The initial acceleration feels strong. Although it is a big scooter, it runs very fast. Intuitively, the actual power performance of the four-valve engine is significantly improved compared with that of the XCITING 300.

It can be seen from the acceleration data that XCITING S350 accelerates very fast in the speed range of 0-80km/h and can easily achieve 100km/h within 9s, which is about 3s faster than XCITING 300. This is also due to a lighter curb weight of 192kg (XCITING 300 is 195kg). The top speed is estimated to reach 130km/h.

The curve performance is as good as ever. It is designed with a low center of gravity to provide a stable chassis. The shock absorbers may provide better support while riding across bumps or during intensive riding. Turning in a narrow place is easy.

Ready to go on unsealed roads

The XCITING S350 comes with front 14-inch and rear 13-inch tiers (the Taiwanese version is tortoiseshell pattern tire). It is essentially a traditional big scooter, but you may want to ride it to the wild.

The stand-riding posture is impressively coordinated and flexible. The small windshield does not cause any disturbance during riding.

With good throttle and center of gravity as well as proper handlebar angle and riding posture, XCITING S350 can run on unsealed road more leisurely than the common recreational scooters. With new appearance, new design language, and excellent comprehensive strength, XCITING S350 will be the new benchmark of the domestic big scooters. Big ADV scooters such as XCITING S350 will be the new trend in the next few years. KYMCO is once again a pioneer in developing ADV models, and is going to further consolidate its leading position in the domestic big scooter field with its strength and sincerity. (Source: WeChat: newmotor) 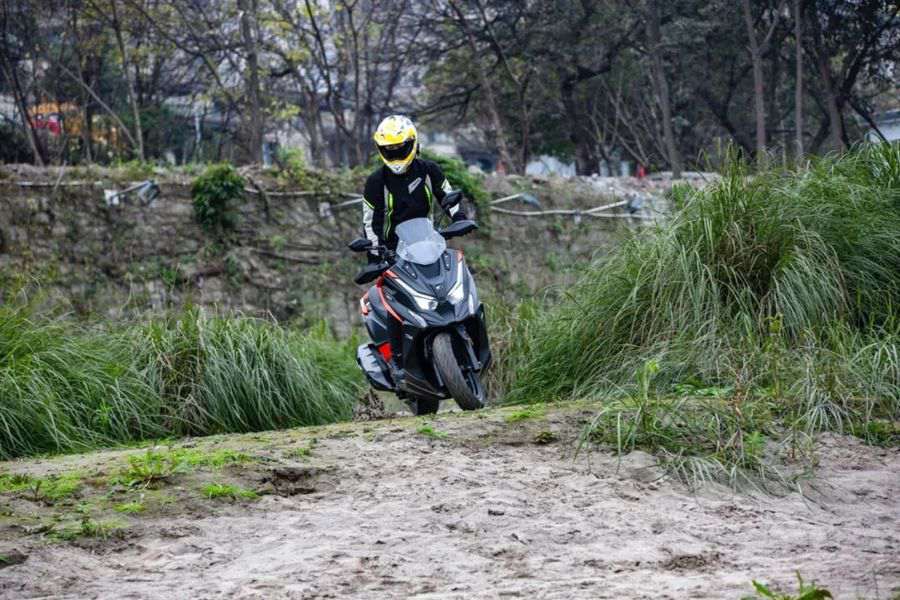