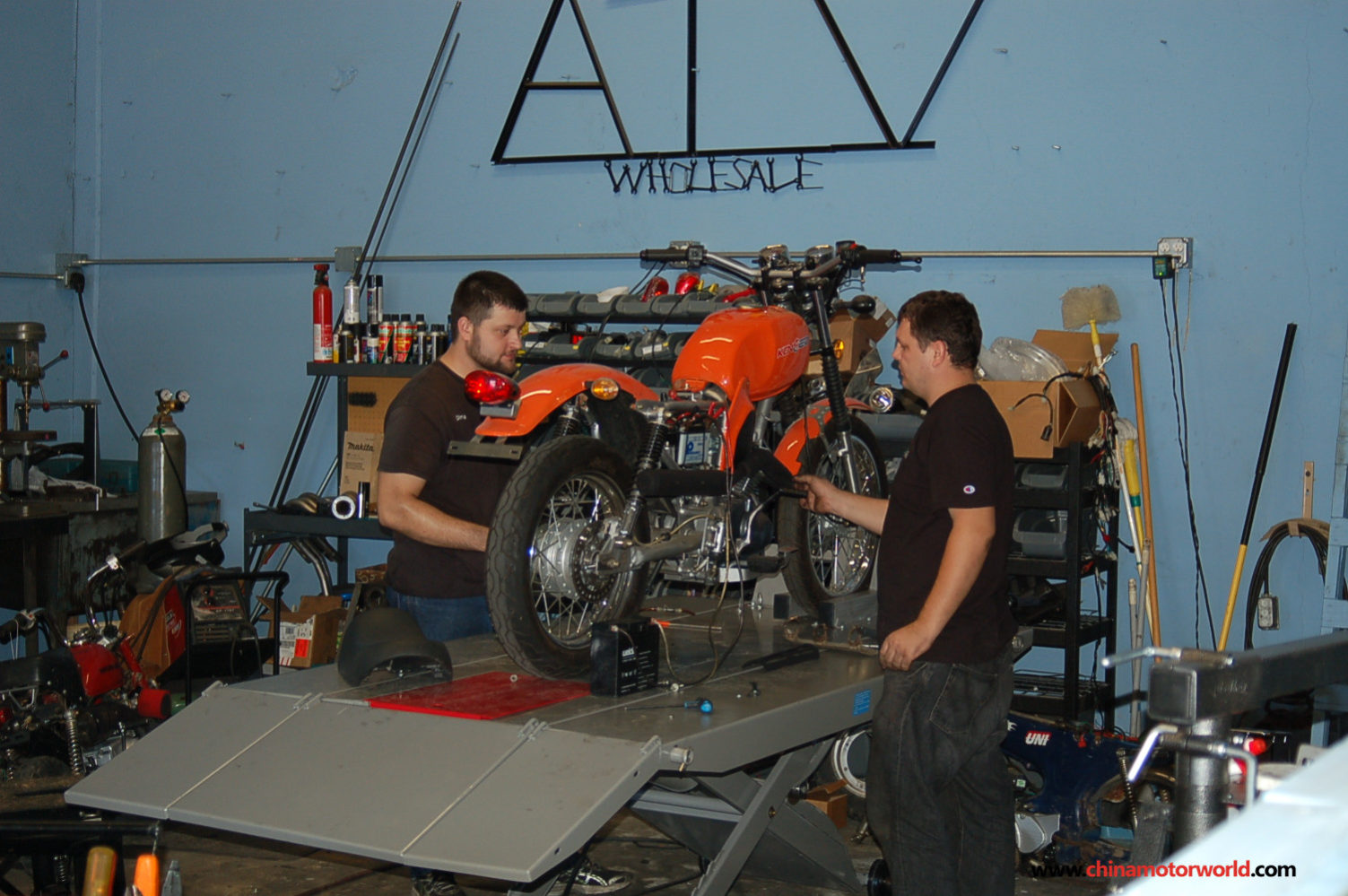 One evening in 2004 my wife and I stopped for dinner at a restaurant we had often passed. It was located prominently on a busy corner in our neighborhood. We entered a dingy room that was strong with unpleasant kitchen odors. No one greeted us as we stood at the cluttered counter, next to a dead potted plant. We should not have been surprised when our dinner, ordered from smudged menus, was tasteless and greasy. 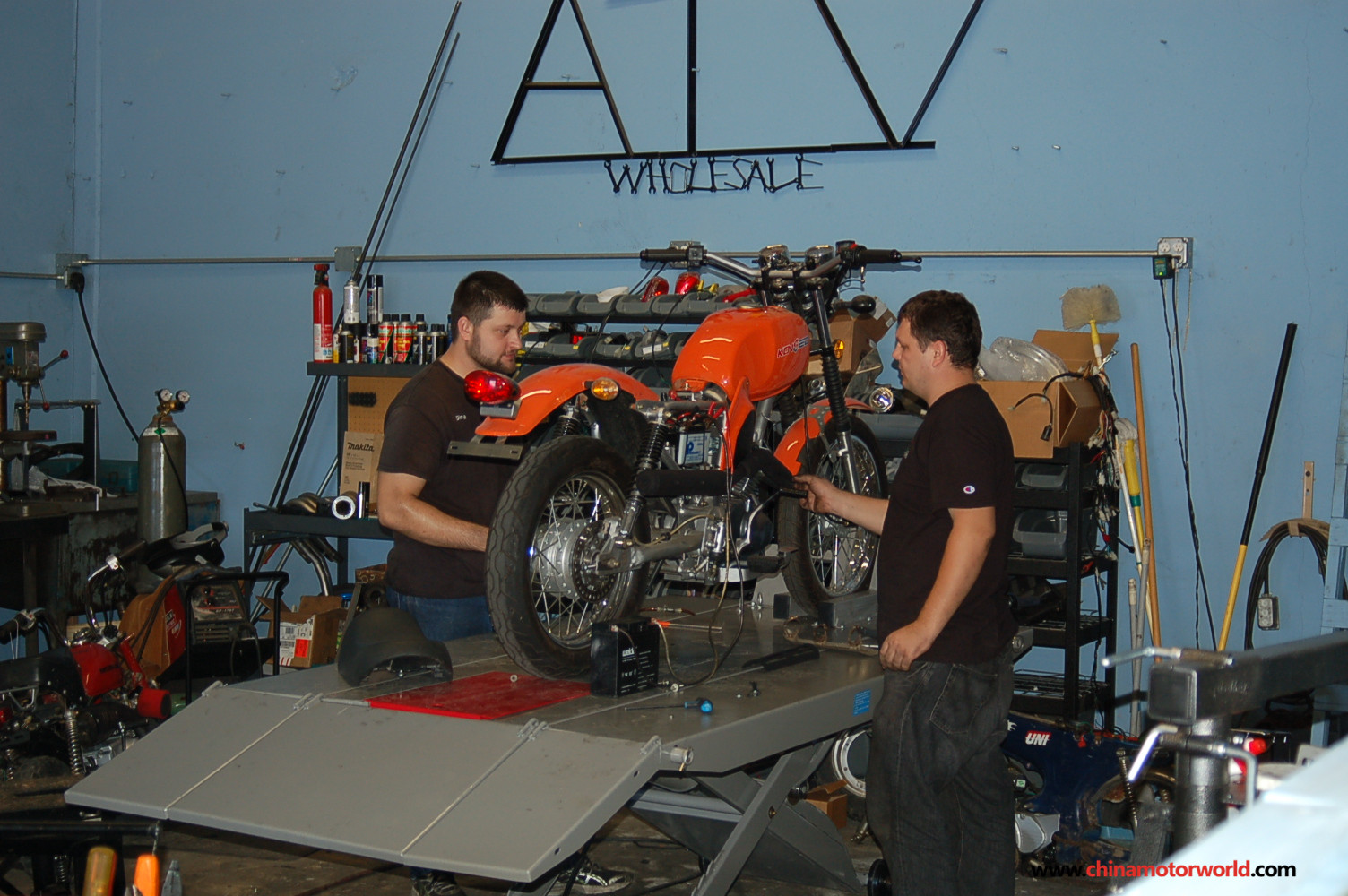 I am reminded of this experience as I approach the subject for this column. In 2004 and 2005 all sorts of businesses sprang up and stayed afloat in the booming economy. That dreary restaurant, like many other half-hearted attempts at capitalism hung on for years.

In 2006 world markets began changing. We all started tightening our belts and watching our spending more carefully. Sales of “toys” such as motorcycles began trending downward. Major vehicle manufacturers such as Yamaha, Suzuki, and Honda suffered. Harley-Davidson saw sales plummet 50% in the toughest years of 2007-2009.

Dun and Bradstreet reported huge numbers of business failures in 2008, 2009, and 2010. Almost twice as many ventures went under in 2009 as in 2007. The US Small Business Administration compiles data on business startups, and their charts show a small increase from 2005 to 2006, but fewer new enterprises in every year following until 2011, when the US started moving toward a recovery. 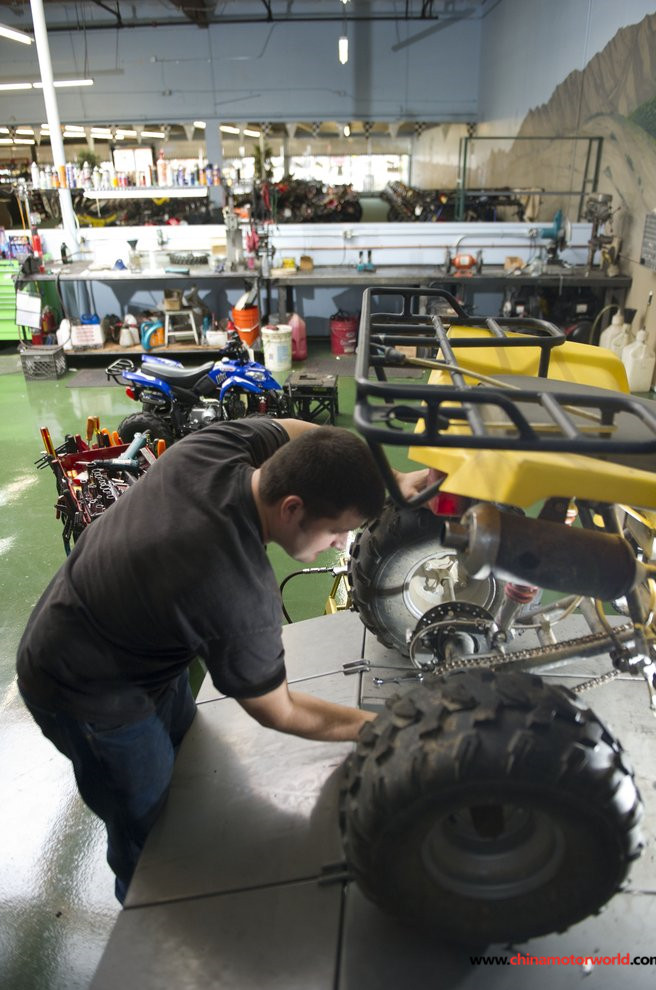 But even in those rock-bottom years there were businesses setting up and going on to great success. The largest full service solar provider in American began in the bedroom of a San Mateo, California entrepreneur in 2006. Many other now-familiar products and services began life during hard economic times.

Remembering the neighborhood restaurant, as well as the ten or twelve competitors I faced in 2007 as I set up my Chinese vehicle business, I’ve wondered what made the difference – why are they gone and I just keep growing?

In the territory I serve, which is northern California and western Nevada, I had occasion to observe my fellow dealers not only by visiting their operation, but also from comments from my growing customer base about why they now come to me. 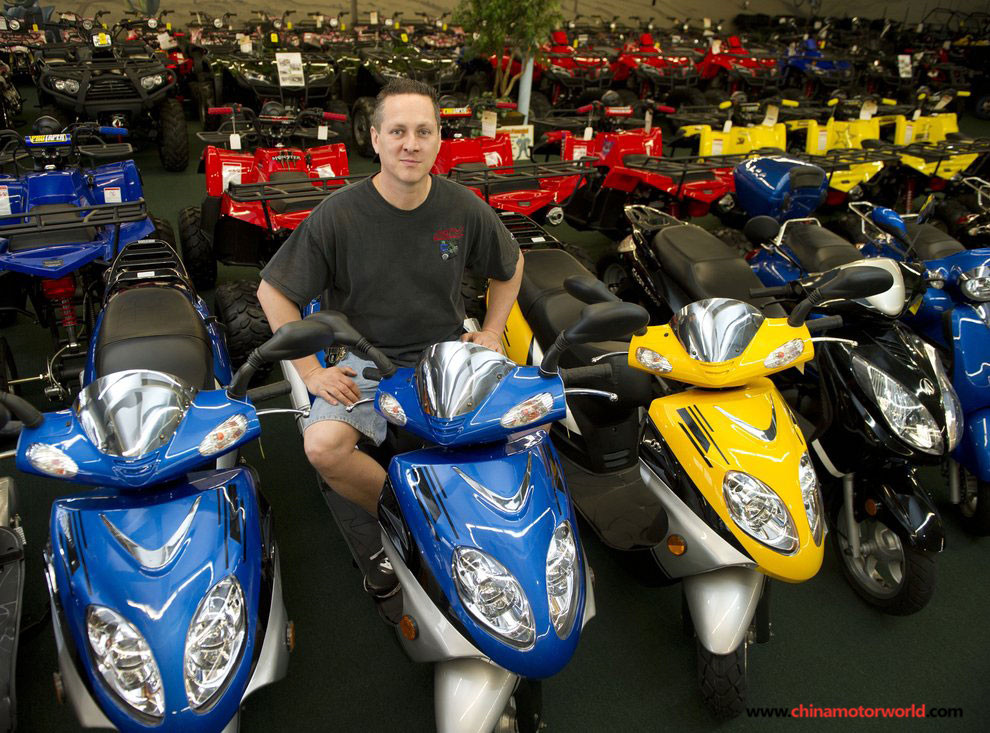 Here is a short list of what I noted about the dealerships that disappeared:

Their signage was poor; it was difficult to find the company.

Parking lots and entrance were dirty.

The “showroom” had few vehicles on display.

Sales people, if you could find one, was unable or unwilling to answer questions about their products.

Parts were not stocked at the tiny establishment; they could be ordered or brought in from some distant warehouse.

Riding gear and helmets? Nothing

There was no service for the vehicles they sold.

And the owner behind these dismal retail shops?

He invariably had limited business experience, but started with “a great idea!”

Trouble managing the responsibilities that go with business ownership, We will look at the factors I believe have allowed Only MY Chinese-only dealership to thrive, but first let’s consider the larger market in America. In my territory, I am beating the Japanese dealers that have the large advertising & marketing budgets, long standing positive reputations, and huge corporations supporting them. Japanese motorcycles have been selling their products, and developing a reputation in America for about 50 years; Chinese motorcycles and ATVs arrived only about ten years ago, so this market is still establishing itself.

A week before Christmas I drove down the street for a visit to my friends at the local Yamaha dealership. I couldn’t help noticing there were no customers. “How’s business?” I asked the manager.  “Slow,” he told me, maybe one vehicle a day, or on a really good day they had sold four. We’ve been friends for years, so we talked about profit margins.  They had roughly the same as I do, or even a bit less.

I arrived back at my dealership minutes later, and noticed in our showroom, we had no less than thirty customers, and every member of our staff was running between multiple customers.  Throughout the month of December we sold ten to twenty new vehicles every day.  Going out the door with the vehicles were helmets, riding gear, gloves, goggles, chest protectors, parts, and so much more.  It was the best December on our records. Each year since the beginning has been higher than the last. 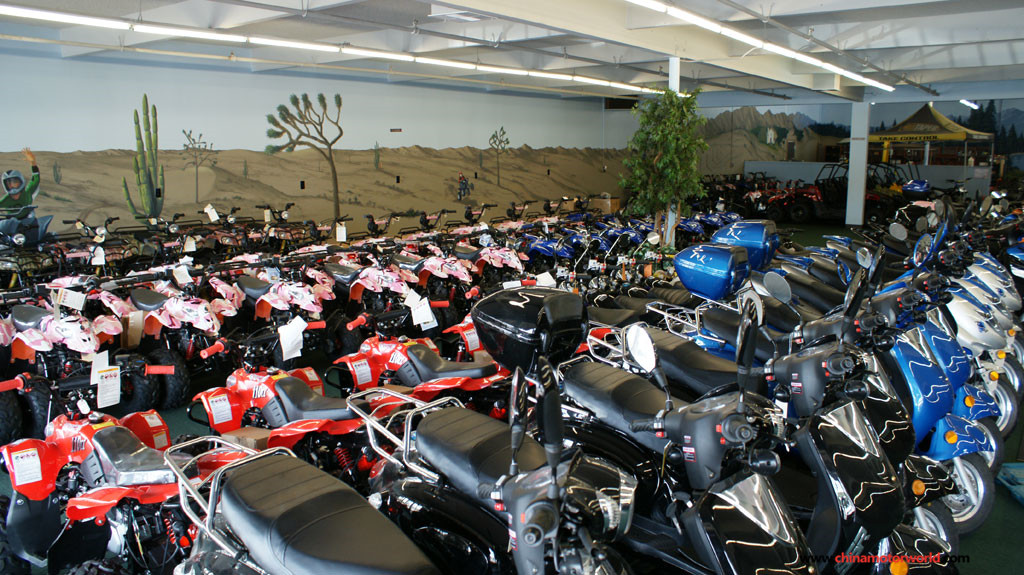 Since I opened ATV Wholesale Outlet, Inc at our new location in April 2012 we have never had less than 50% sales growth over the same month in the previous year. With a few of our products and departments we have seen an astounding increase of 250% to 400% yearly growth. In the years we were located on an out-of-the-way street, we still had very large increases in sales year after year.  This was during years that Japanese dealers were experiencing flat sales or even decreases.

A few statistics I’ve found tell us motorcycle sales, not counting Chinese vehicles, were down 5.2% in the first six months of 2013 (Motorcycle Industry Council). The same reliable source says the Scooter market saw a 23.3% decrease in the same period. ATV sales were down 3.5%. Their reporting members were: BMW, Can-Am, Ducati, Harley-Davidson, Honda, Kawasaki, KTM, the Piaggio Group, Victory, Suzuki, Triumph and Yamaha.

DealerNews, an industry publication that spotlights off-road vehicle dealers, reported in the January 2014 issue results of a survey sent to American powersports retailers for their predictions for 2013. Their expectations were unfortunately fulfilled. Continuing the trend of 2012, sales and growth in 2013 were “lackluster.” So, most of the major brands are still having problems. Strange, how we do not.

The president of the California Motorcycle Dealers Association bemoaned in his end of 2013 message to dealers that sales of new motorcycles dropped a shocking 52% from 2008 through 2012. He was hoping for better figures from 2013. 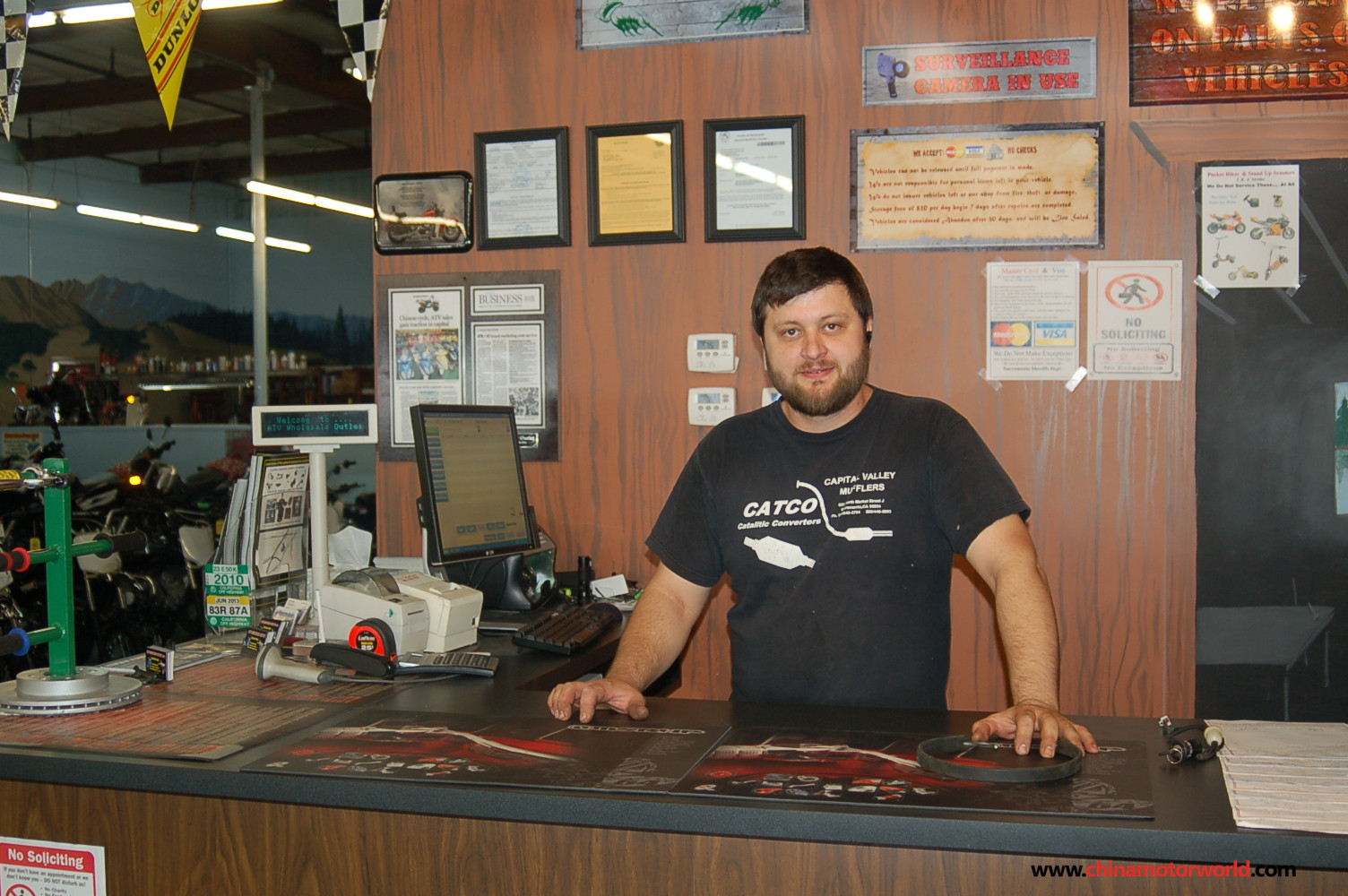 So back to the question I have asked myself, and you may ask, how have I managed to grow in a difficult economy, when not only other Chinese dealers have failed, but Japanese, European, Korean, Taiwanese and American powersports dealers are suffering still. Yes I was told on all sides that I was crazy to start this business in 2004.

This is what you find when you visit my dealership:

ATV Wholesale Outlet, Inc is located on a busy street just off the freeway. It’s easy to find.

We are in “motorcycle alley” near dealers of all major brands such as Yamaha, Suzuki, Kawasaki, Ducati, Husky, Hyosung and others. Great shopping area.

A row of shiny ATVs & Scooters are lined up in front of the building along the street to get your attention.

A huge banner sign stretches across the length of the building, announcing in bright red and black letters you have arrived.

The front windows are filled with an enticing display of colorful vehicles and lights.

Walk through the front door and be stunned by the vast array of ATVs, scooters, dual sport bikes, dirt bikes,motards and more. There are also racks and display cases stocked with riding gear, helmets, and thousands of parts.

An immense hand painted Western theme covers 1 enormous wall of the showroom, and continues across the service department walls

The dramatic theme is carried through the building including into the luxury bathrooms with cowboy touches.

Experienced mechanics are on duty six days a week, visible in the large open service department.

You will be greeted by knowledgeable staff ready to help find anything you are looking for.

Hangtags on every vehicle reflect the Out The Door price. There will never be any hidden charges added at the cash register.

How did I put this together? It has grown from my vision of a dealership with integrity. Every business has a unique character built around the values of its owner/founder. No doubt some of my personal characteristics are at the core of ATV Wholesale Outlet.

I am “hyperactive.” I have energy to see my ideas through to completion.

I demand that my employees be clean, honest, and polite to my customers.

I love challenges and problem-solving.

I have a real desire to make my customers truly happy. I want a life-long relationship with them.

I have been a salesman and businessman since I was eight years old and selling donuts door-to-door for the Boy Scouts.

I have launched a number of small businesses, learning from each experience.

I am conscientious and decisive.

I am really crazy about having everything clean, and well organized.

I demand an updated, comprehensive, easy to read, easy to find what you want web site.

I research ideas before I dive in.

I have never been a quitter.

It seemed obvious to me in 2004 that there was a market for good-looking, affordable ATVs, Motorcycles and Scooters. No one was providing the products or service for this market, especially at a price the public was willing to pay. I started cautiously but very optimistically selling a few ATVs from my garage. It became quickly clear to me the consumers were there. I researched and rented a warehouse, got a dealer’s license, and found suppliers of Chinese ATVs, Motorcycles, Scooters, and parts.  I assumed from the beginning that providing parts, service and riding gear was essential.

For us, it has all come together, and done extremely well, even when all the others were failing. Every detail matters. Being small, sloppy, rude and dirty just won’t work anymore.

Any thoughts or comments….. [email protected]