January 25, 2022
Posted by: chinamotor
No Comments

When QJMOTOR officially released the R250 at the MOTOR CHINA in Beijing, it has been the best looking one in its class. Its sharp body lines, sporty styling and single-arm design have made it attractive to many young people.

Beginning with its appearance

QJMOTOR’s previous models are all distinctive in appearance and styling. As a brand focusing on young people, QJMOTOR has a good understanding of what young people like. For example, the sports-oriented “R” series, the previous QJ600GS-3B was a popular product. Now the manufacturer has launched this R250 to the extreme in its appearance design. The overall design adopts the current mainstream sports style, the front split design is full of sense of fighting, the side fairing makes the whole bike have strong dimension sense, the tail modeling is a little exaggerated, and the hollow-carved design on both sides is basically the standard for this level’s models. Manufacturer says that the appearance of this motorcycle has been aerodynamically designed and subjected to rigorous wind tunnel testing.

In terms of details, the single rocker arm is undoubtedly the motorcycle’s biggest appearance highlight. One of the reasons why people love it is that it needs stricter manufacturing process which represents an advanced feeling. The other reason is that the single rocker arm makes rear wheels look plumper and visually impactful. And the manufacturer also seizes these two points and adds the single rocker arm to this small displacement sports model which is very bold and really make it be impressive.

Also, this motorcycle reveals strong sporty characteristics, for example the handlebar is under the uplink board which is obviously a sporty design. The uplink board also adopts hollow design as much as possible, highlighting the movement elements and its lightweight. And in the license plate, pedal and fender details, the bike is as lightweight as possible. From the appearance, the whole motorcycle really has a racing bike feeling. 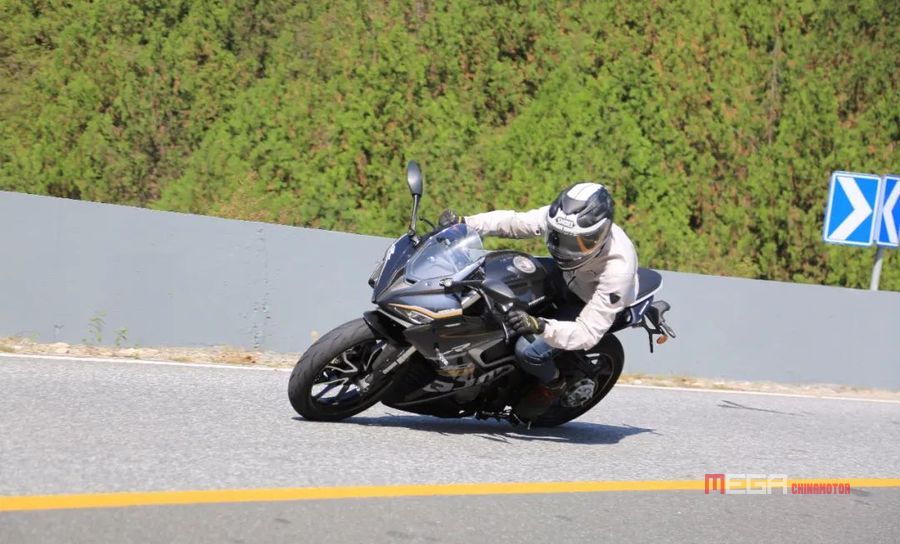 In terms of configuration, R250 is as good as the same level domestic models. The frame is still the most commonly used tubular frame of this level. The rear rocker arm is a one-piece cast aluminum single rocker arm which is lightweight while ensuring strength. Front shock absorber adopts KYB inverted fork, while rear damping is central single shock absorber with preload adjustable. This bike’s break system is more suitable for daily riding with one-way dual piston calipers on both front and rear and no semi-floating disk. And the tire is a relatively balanced semi-hot melt tire CM-S1 from CST.

This bike is equipped with single cylinder water-cooled DOHC 4-valve engine with the maximum power of 20.5kW/9,500rpm and maximum torque of 22.5 N·m/7,250rpm, and the overall data is not bad in the same level of domestic motorcycle. This bike adopts lightweight design, and its curb weight is only 159kg which is relatively light in the same level.

In other configuration, this motorcycle adopts TFT LCD instrument and a USB port is designed next to it. Considering the need of novice and female riders, the seat height is only 780mm and the front of the seat cushion has a narrow design. However, the rear cushion is relatively narrow and the middle of the cushion uses a slightly raised design in order to better fit the whole shape, and the rear seat is more decorative to this kind of sport bike. 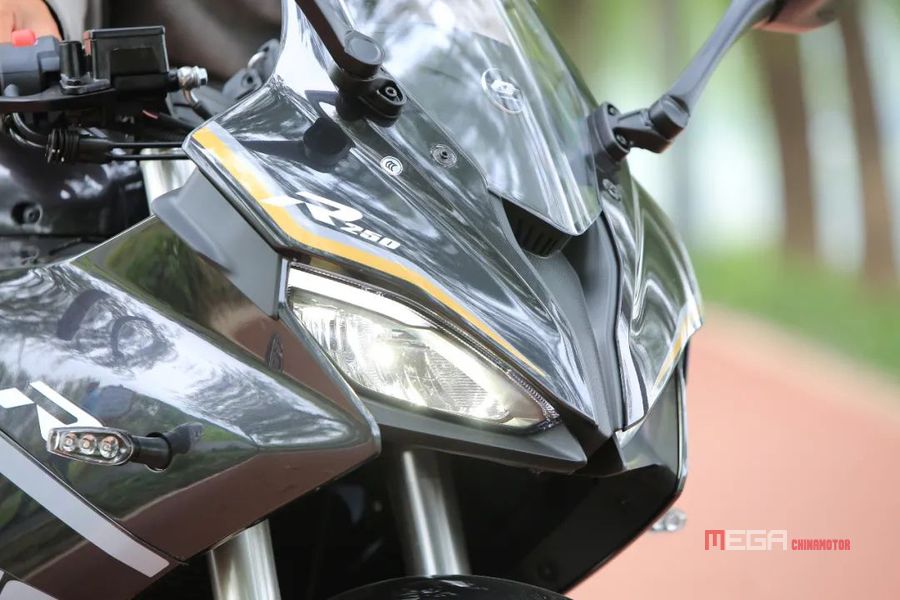 Since it is called R250, sports is its most obvious label. However, as a small-displacement sports bike, we can experience more scenes of daily. After all, most people choose this motorcycle. Besides the appearance, more is about the daily transportation or mountain running entertainment.

Most riders are indeed satisfied with the 780mm seat height, but it is not friendly to riders who is taller than 180cm. The pedals of R250 are higher than general street bikes due to the positioning as a sports model, and tall riders may find the legroom a little bit narrow. The handlebars are lower than street bikes due to the structure under the uplink board, and the overall riding posture is closer to superbikes.

As a single-cylinder small-displacement model, the vibration suppression of this bike is unexpected outstanding. The vibration hardly attracts your attention before 6000r/min. 6000-7000r/min is the common vibration zone of this bike, and vibration on hands is more obvious. After 7000r/min, the vibration has slightly reduced. As a domestic single cylinder model, it’s really good to have such a vibrational behavior. 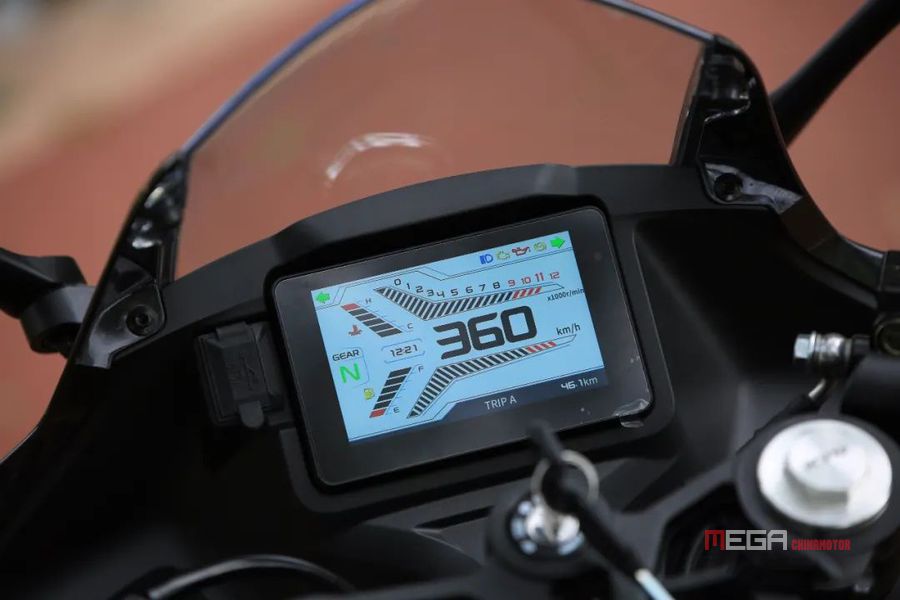 In addition, the improvement on sound is also quite good. Though it is just a 250cc single-cylinder model, its sound during running make you feel that you were riding a big displacement multicylinder bike with modified exhaust.

The R250 as a sports model for the youth, the whole bike is very light on the control. It’s very easy to ride this motorcycle in cities, even novices don’t have much pressure. The overall control is very flexible because the body is light, you can change the posture of the body without making large movements. The flexible control is very suitable for the complex traffic in cities. Besides, the R250 as a sports model, has a big rudder angle which is very convenient when at small radius turn. It’s easy even when turning around.

From the engine specification, this motorcycle tends to power at medium and high rev. And in practical driving, there is also considerable power output at low and medium rev. It increases fast, and the accelerator is also very sensitive which is also the representation of this bike’s sport style. After the engine is matched with the sliding clutch, clutch feels light, and the feeling of shift footsteps is very smooth. The only fly in the ointment is that the shift stroke is relatively long, especially when it comes to upshifting which requires big foot movement, but it doesn’t take away the enjoyment of shifting.

In terms of shock absorption, manufactures still hopes that this bike to be more athletic. The rear shock absorption is designed relatively hard, especially the rebound damping design. This adjustment is not helpful for comfort but for sports riding and fits the sporty orientation of the bike. The front brake feels relatively linear, which makes it easier to control the brake in daily transportation. However, in case of emergency, it is necessary to exert a larger force on the brake to stop the whole bike.

It can be said that the performance of the R250 in the city is very suitable for daily use, not as public as its appearance. But when we rode the bike in the mountains and experienced sports driving, we found this motorcycle still have the characteristics of “race”. The flexibility in the city before made me suspect that this bike may not be easy to control in sports riding. After adapting for a period of time, We found that even in a more radical environment, the whole bike can still have a good stability, especially the dynamic performance in concerns, which can give you strong confidence, but the feedback on the control is very sensitive which may be the biggest feature of this bike.

In the sports driving, the braking before turning is a relatively weak part of this bike which may be more considered for daily use. The configuration of the braking is not high which can only be considered sufficient in a slightly fierce riding environment. After corners, rear shock keeps the rear wheels firmly attached to the ground, making it very stable even increase the throttle. The turning and tipping of the whole bike is very similar to that of a superbike-aping which also adds to the playability of the motorcycle. 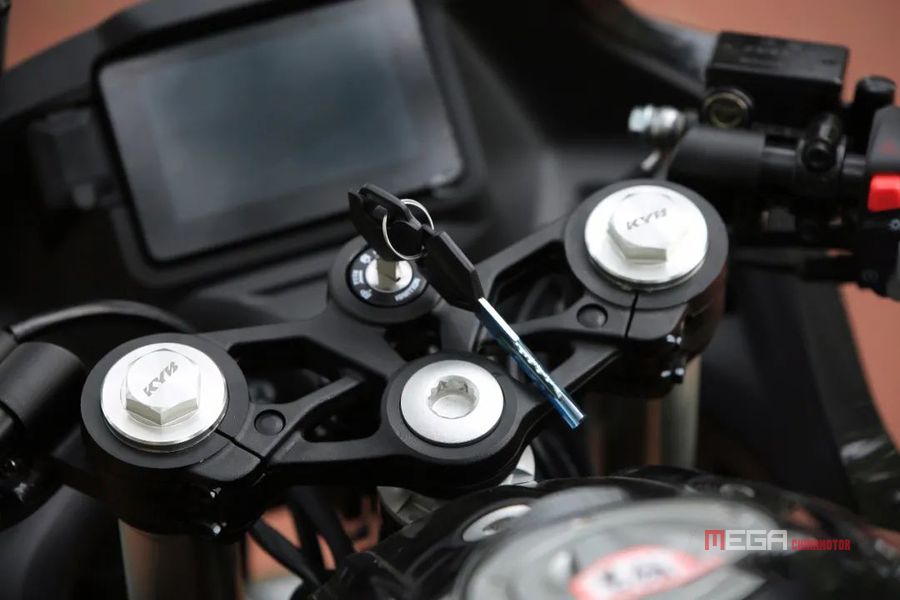 Due to the use of sliding clutch, on the one side, clutch feels lighter, at the same time in lifting gear without clutch and continuous drop of multiple gears, this bike can still remain smooth. The suitability of this sliding clutch and this engine is very good.

In sporty driving, the R250 can show more athletic performance which proves again that the bike is not specious at the same time, but an entry level of appearance and performance of sport model. Although it is not compared to professional small-displacement superbike-aping, but for daily use and the occasional movement riding, R250 completely can be competent, and can also provide you with great fun to ride.

From QJ600GS-3B to R350, then to this R250, every model has its own characteristics, and R250 displays its unique charm in the small displacement sport bikes. The characteristics of the whole motorcycle allow it to reach wide audience. Novices, young people and female riders are all potential users of this bike. At the same time, it can also provide good performance in daily transportation and sports riding. It can be said that QJMOTOR provides a brand new choice for riders in the small-displacement sports motorcycle market. (Source: WeChat: MTC-CHINA)