In 2021, China’s motorcycle exports (complete vehicles) continued the growth trend of the previous year. According to China’s customs statistics, in 2021, China’s motorcycle exports totaled 119.27 million units, representing year-on-year growth of 23.0%; the export value totaled USD7.01 billion, representing year-on-year growth of 39.7%, hitting a 10-year high. Specifically, the export volume in February increased by more than 167.2% year-on-year. Due to the low base of the same period last year, the exports surged by 187.4%. In terms of he monthly trend, the growth of export volume and volume in the first half of the year basically maintained above 40%, which gradually decreased in the second half of the year. In the fourth quarter, the export volume was basically flat with the same period in 2020 (see the figure below). In 2021, exports of all motorcycle types grew. Among them, 100cc-150cc models accounted for 60% to 70% of the total export volume and value. It is worth noting that both the export volume and value of models larger than 400cc doubled, and the main destination markets of these models were Italy, Argentina, Spain, France and other European countries.

III. Exports to Latin American markets were growing rapidly, with Mexico as the largest export destination 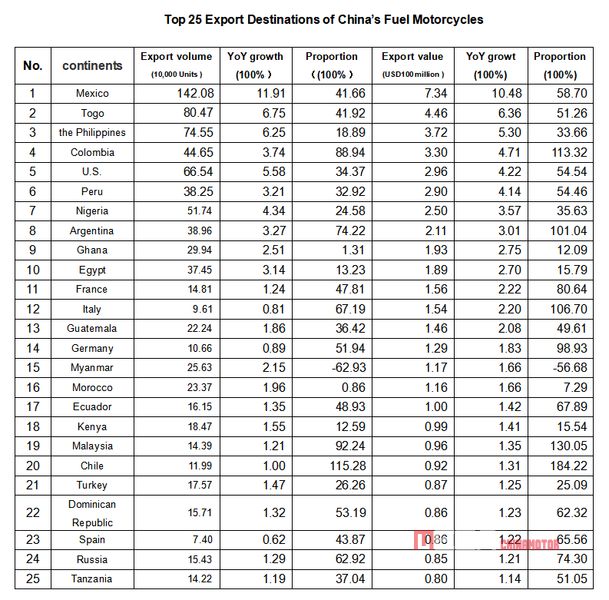 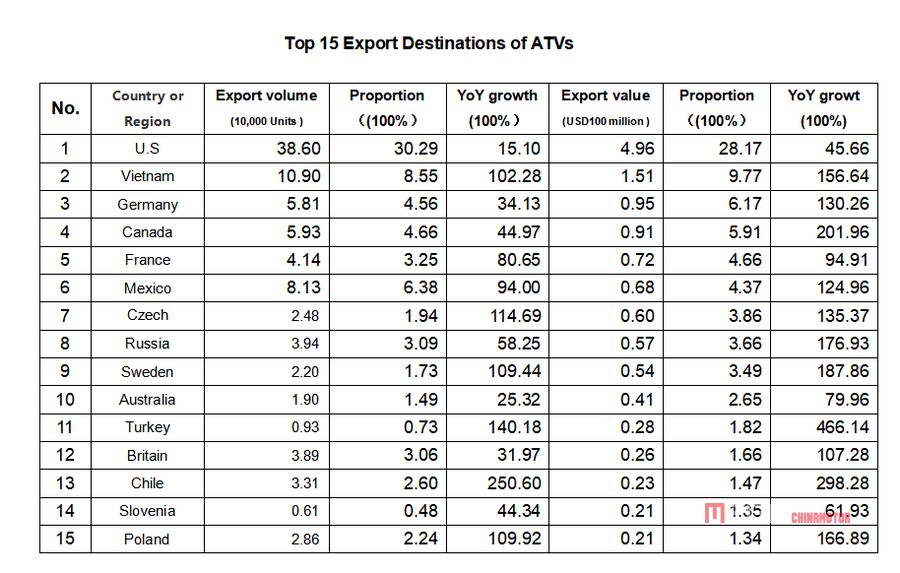 With the implementation of RCEP, the preferential tariff effect of Indonesia, Malaysia and other markets on Chinese motorcycles will gradually emerge, which will bring long-term benefits to the export of Chinese fuel and electric motorcycles, and also increase the penetration rate of electric motorcycles in Southeast Asia. In addition, the potential of motorcycle demand suppressed by the pandemic in many countries has not yet been fully unleashed; China’s large displacement motorcycle export to Europe and the United States still has great potential to tap; the tariff exemption policy for ATV export to North America may continue. It is expected that China’s motorcycle exports will stabilize and rise steadily in 2022. Moreover, a new consumer group will appear gradually, combined with the possibility in adjustment of the motorcycle forbidden policies, the Chinese domestic market will maintain a heat.