Analysis: Production and Sales of Motorcycle Industry in 2018 February 20, 2020
Posted by: chinamotor
No Comments

In 2018, China’s motorcycle industry was facing a severe and complicated situation at home and abroad, as well as more stringent environmental protection measures. The overall performance of the industry was depressing, and the product structure was continuously optimized.

A. Overall production and sales declined

The causes leading to the decline of production and sales of the industry mainly include:

1) China has strengthened the efforts on environmental protection and implemented National IV Emission Standards for motorcycles, requiring that since July 1, 2018, all motorcycles and mopeds going through type inspection should meet the standard. By July 1, 2019, all products of the National III Standard must be upgraded and replaced, and all products announcements under the National III Standard will be cancelled. By then, all products sold and registered shall meet the new emission standard. The implementation of the new standard increases the manufacturing costs of motorcycles, which has a great impact on the middle and low-end products. At present, enterprises are actively responding to the switch from National III products to National IV products, completing the sale of National III inventory vehicles and preparing for the rollout of National IV products.

2) Due to the increased uncertainty of the international economic situation and the rise of trade protectionism, China’s motorcycle export slows down, which weakens the total industry production and sales.

3) With the improvement of residents’ income level, automobiles are affordable to more families, especially in rural areas. In addition, cheap low-end e-bikes have already occupied a huge market share in the rural areas, resulting in a double squeeze on the motorcycle market and shrinking market space.

4) The transformation and upgrading of three-wheeled motorcycles encountered difficulties, resulting in significant decline in the production and sales of this category.

Affected by the above factors, the production and sales of the whole industry in 2018 are significantly lower than that of the previous year, and the overall performance is relatively frustrating. 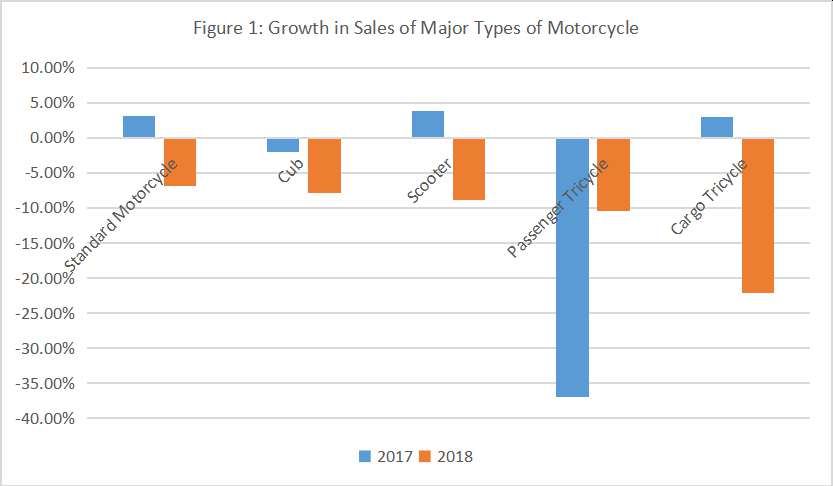 B. 250cc and above models saw growth against trend

Since 2011, the motorcycle industry has entered the phase of transformation and upgrading, and the product structure has been continuously optimized. The market share of standard models which has the largest proportion of the industry are constantly shrinking, while the scooters obviously enhanced its market share, as an urban transport tool. The cubs, restricted by its body structure, have seen continuous decline in its market share in recent years. But over the past two years, this trend appears to have changed slightly. In 2018, the sales of standard models accounted for 52.9% of total motorcycle sales, up by 1.29 percentage points compared with the previous year. Since the sport and entertainment features of riding are mainly reflected by standard motorcycles, and with the improvement of people’s living standard, the market demand for the standard models as a recreational tool is constantly expanding, which will help increase the market share of this category. 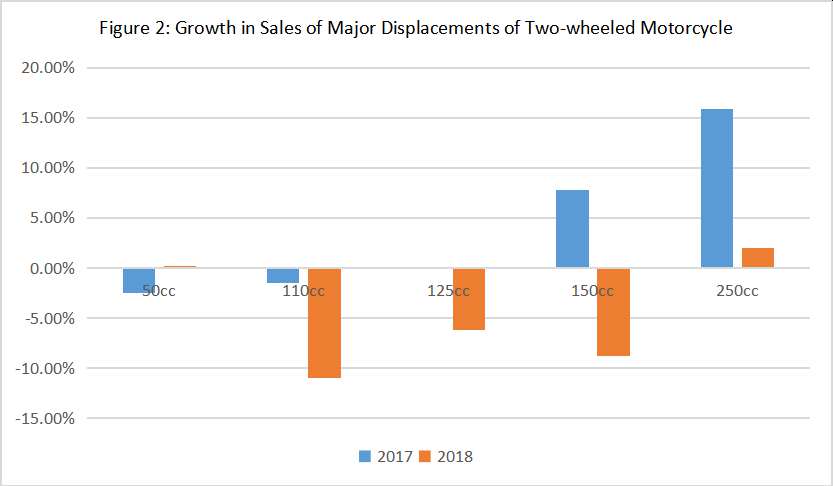 From the perspective of monthly change of the motorcycle export value, January saw most obvious growth; February saw rapid growth; After March, the growth slowed down, and after October, the export growth declined again. Overall, the fourth quarter was the most sluggish season.

From the perspective of monthly change of motorcycle export volume, there was a rapid growth in January and a sharp decline in February. From March to September–except for a small increase in May, there was a small decline in all months. The decline was more obvious after October. A total of 1,686,800 vehicles were exported in the fourth quarter, which was also a lot weaker than the first three quarters. In 2018, a total of 6.6766 million units of the above five series were exported, accounting for 91.35% of the total motorcycle export. The total export value of the five series was 3.652 billion US dollars, accounting for 88.04% of total motorcycle export value. In addition, the export of motorcycles above 250cc decreased in number but increased in value: 56,200 units were exported, a year-on-year growth of 5.78%; a total of 134 million US dollars was achieved, up by 44.78% year-on-year.

Three-wheeled motorcycles showed a small decline, with a total of 350,600 units exported, down by 4.84% year-on-year; the export value totaled 268 million US dollars, down by 8.06% year-on-year. 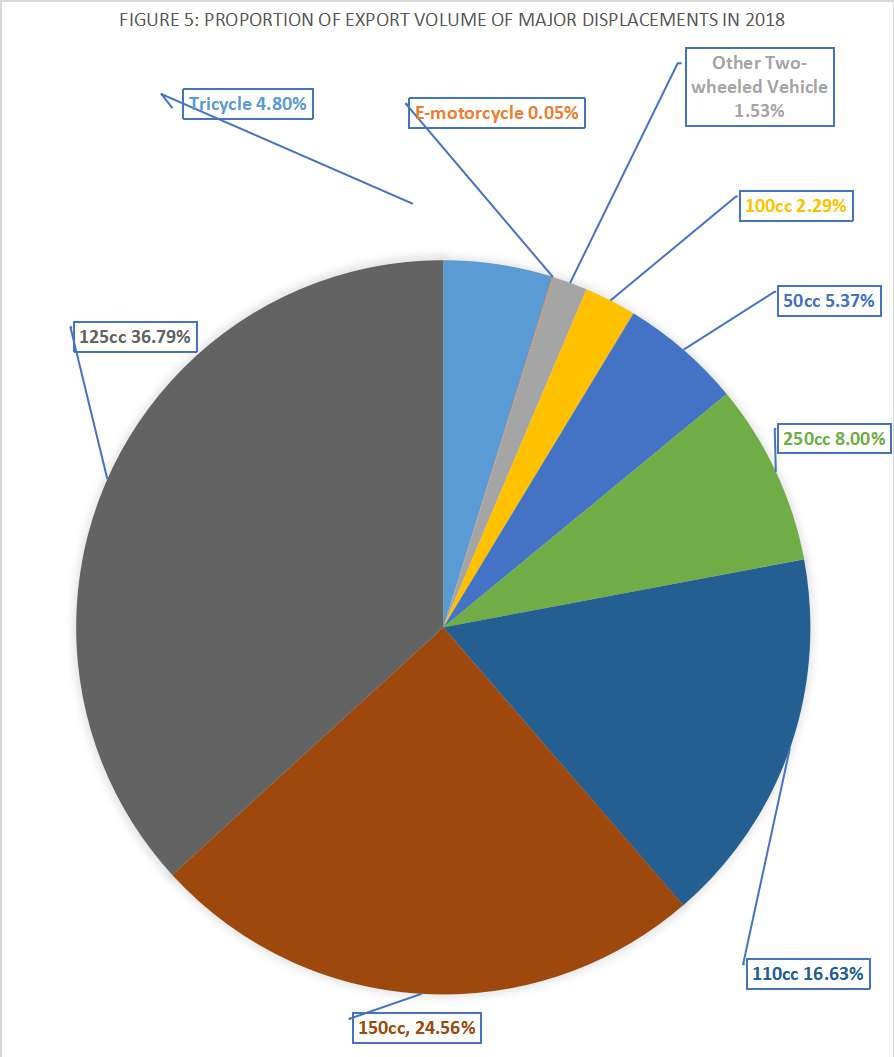 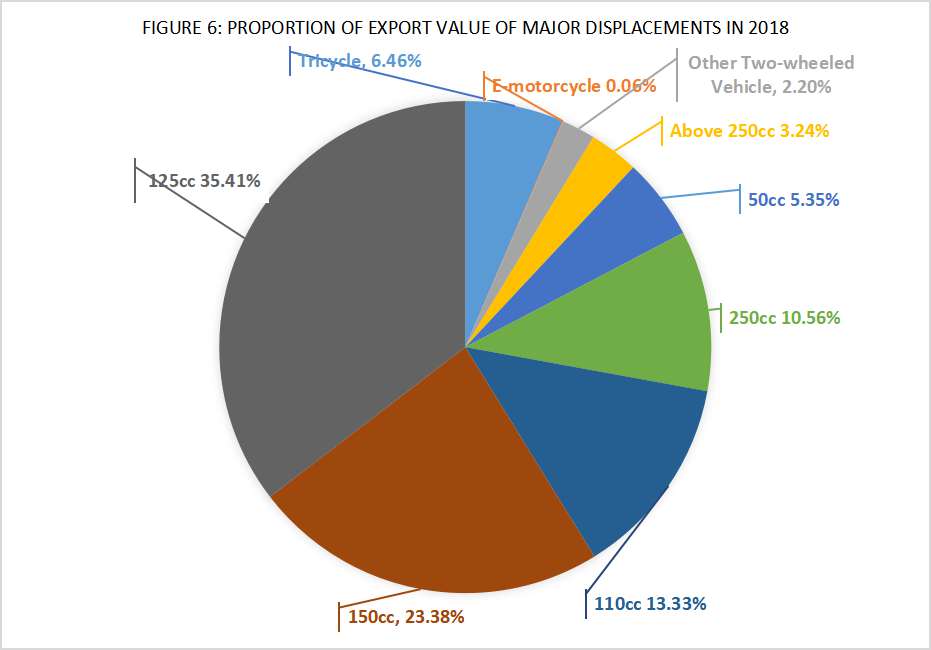 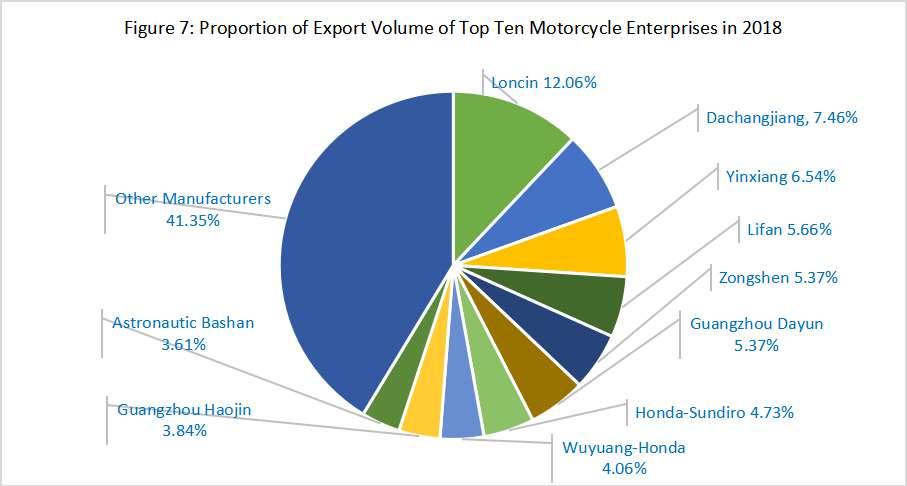