BAFANG Is The First To Obtain The UKCA Certificate The UKCA certificate requires test results of product EMC to meet the EN61000 standard. EMC refers to the ability of a device or system to operate in its electromagnetic environment without causing intolerable electromagnetic interference to any equipment in the environment. With superior anti-electromagnetic and anti-interference capabilities, BAFANG’s M200 central system ensures that it will not affect the use of other electronic products during operation, and will not run out of control due to strong electromagnetic radiation interference around, providing safety guarantee for daily riding. 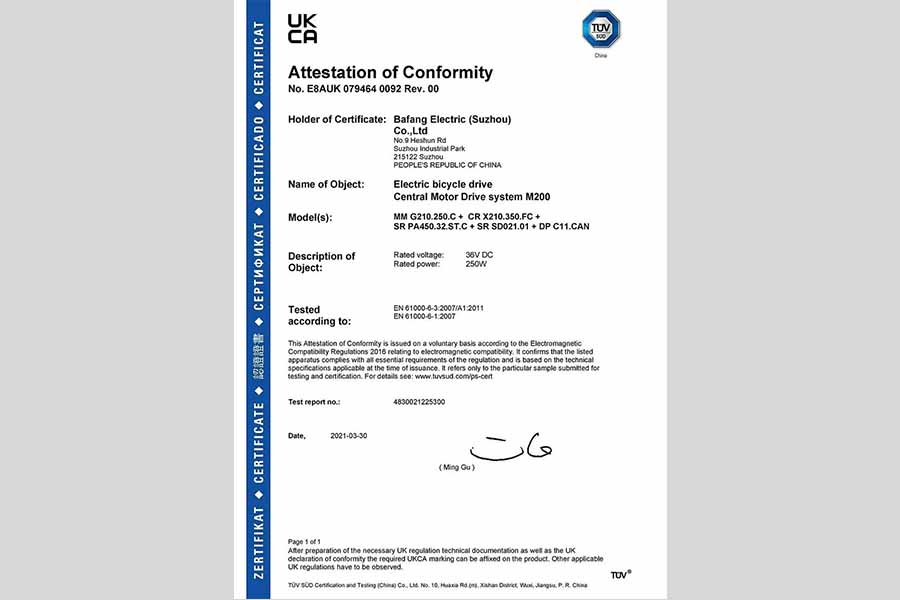 In addition, independently developed by BAFANG, the M200 central system is stable, quiet and economical. It is suitable for e-City (electric urban bicycles) and is welcomed by OEMs and brand owners. In the past two years, BAFANG ‘s R&D team has continuously innovated and optimized the structure of the M200 motor transmission parts, achieving almost 100% mute function without affecting the 250w power output of the motor and the strong performance of the system.

On January 1, 2021, Britain officially left the EU common market. At the same time, the UKCA certificate officially replaced the CE mark as the new UK product safety mark. Under UK regulations, the UKCA mark will be mandatory from January 2022, with both CE and UKCA marks applicable for the interim period. For Chinese manufacturers exporting to the UK market, this change will undoubtedly have a certain impact on their business expansion in the UK and the EU.

“UK is one of the most important and promising markets for BAFANG in Europe,” said Mr. Jiang Huiping, marketing director of BAFANG, “the UKCA certificate is of great significance for BAFANG to expand to the UK and other overseas markets. BAFANG has been committed to providing consumers with safe and high-quality products. In the future, BAFANG will continue to shape the industry with high standards and create more industry’s first with quality as the cornerstone.”