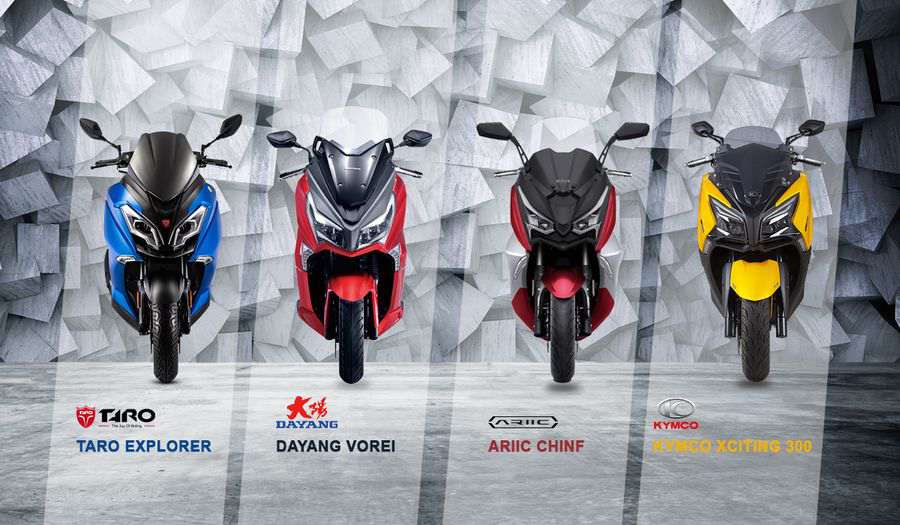 Nowadays, more and more people choose to travel by motorcycle to enjoy the freedom and passion it brings during the journey. With the improvement of road conditions and the continuous improvement of infrastructure in China in recent years, scooters with more convenience and comfort are gradually turning from cities to suburbs and mountainous areas and running farther away. Among them, the medium and large scooters with stronger power, better comfort, larger space and higher configuration have become the new favorite in the market.

At present, the domestic large scooter market is still dominated by KYMCO that provides a full range of products from 150cc to 550cc models. But with the development of more and more new products, the market competition is becoming increasingly fierce. Here is brief introduction and comparison on four hot domestic 300cc scooters. 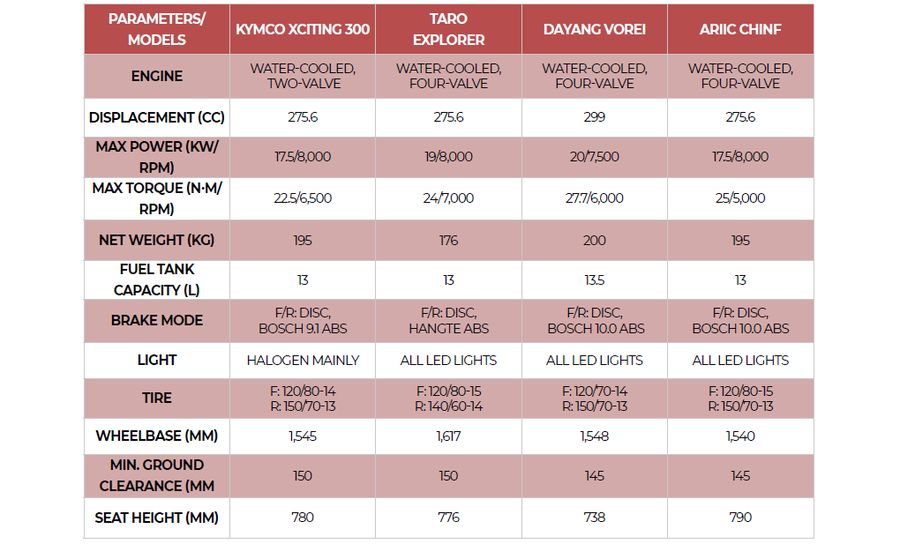 In 2015, KYMCO launched the Xciting 300, which was well received among users with its elegant appearance and strong power. KYMCO won the initial success in the domestic middle-large scooter market with Xciting 300, and strengthened its position in the field with more Xciting series. KYMCO is a well-deserved winner in the field.

The appearance of Xciting 300 inherits the characteristics of KYMCO, and the family-based design language provides a high degree of recognition. It is a typical leisure touring scooter. 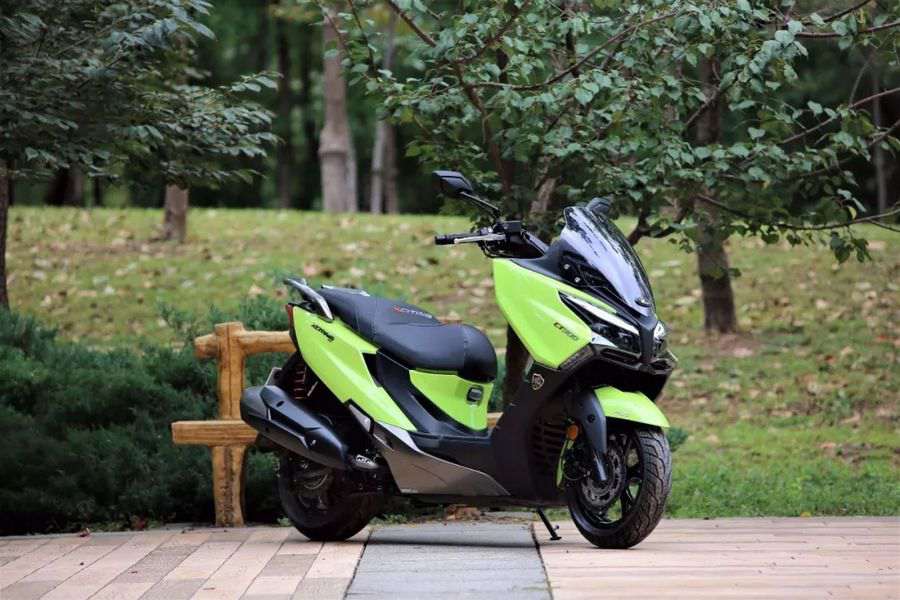 Although Xciting 300’s headlight uses halogen light, it is matched with a H17 high-lumen quartz light, which is well integrated with the LED daytime running lights and tail lights. With the exception of headlight, other lights are all LED lights.

The instrument of Xciting 300 is combined by a pointer and a LCD screen. The left side of the instrument shows the speed and the right side shows the rev. A LCD screen is used in the middle to clearly display fuel level, temperature, time, etc. 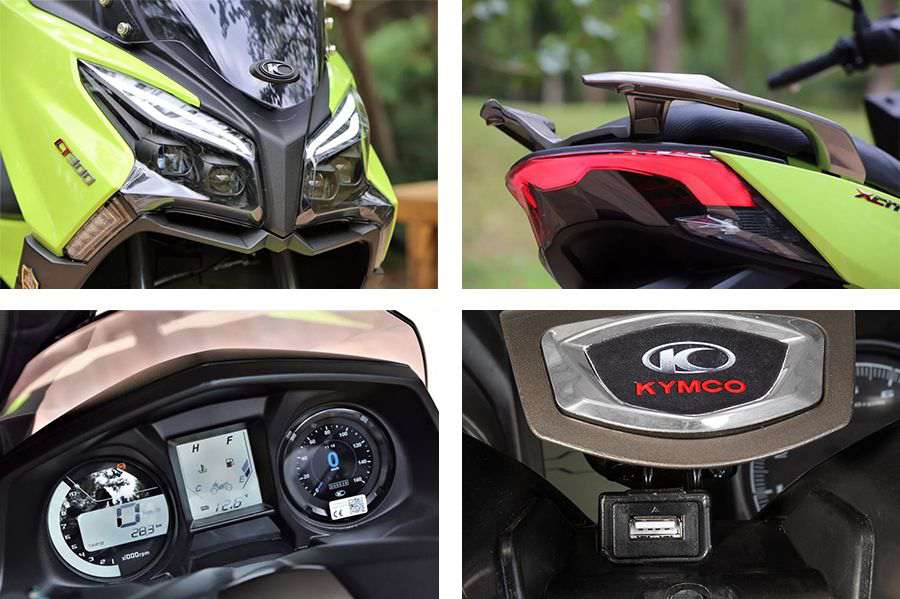 Xciting 300 has a storage space at lower left, with a USB and a power interface inside. There is enough space under the saddle to contain one full-face helmet and one half-face helmet. At the same time, the saddle can be opened and closed only through a pneumatic lever.

Xciting 300 carries a 275.6cc (actual displacement) water-cooled two-valve single-cylinder engine, with a maximum power of 17.05kW/8,000rpm and a maximum torque of 22.5N·m /6,500rpm. This engine has stable and reliable performance that has been fully verified by the market. 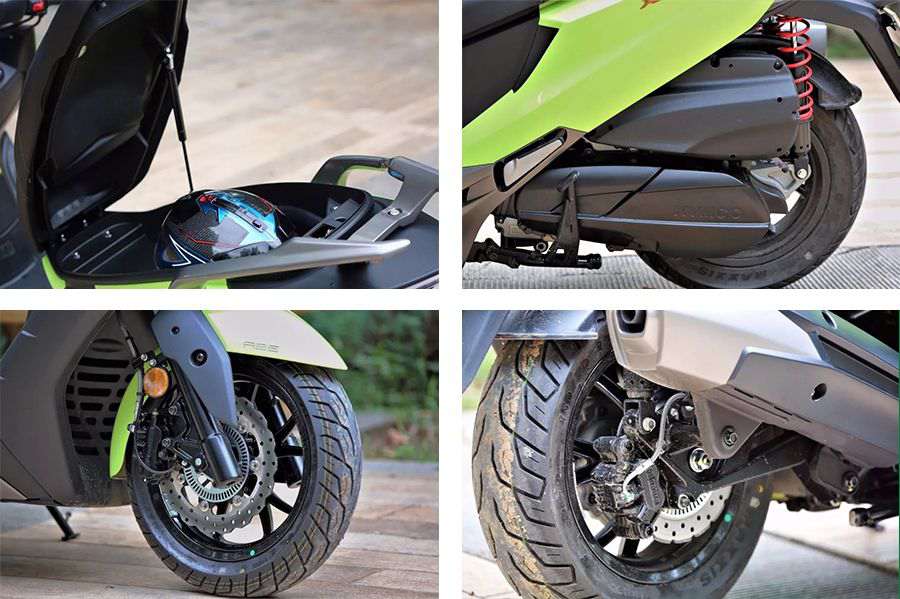 Summary: as the hero and market pioneer of KYMCO, Xciting 300 has gone through the test of the market and gained a good reputation. It can be regarded as the benchmark of scooters of its kind.

TARO Explorer 300 was put into the market in March 2019, and the word “cost-effectiveness” follow it all the way from the moment it was launched. As TARO’s first big scooter, it shoulders the responsibility of market exploration, which requires it to be unique in design and configuration.

TARO Explorer is designed by an Italian team, with more lines to delineate the sharp appearance. The slightly upturned tail also reveals a sports style. The overall appearance is more attractive to young people. The whole scooter uses LED lights. The hawk-eyed lens headlight is matched with a LED light bar. It has combined tail lights, with the brake light in the middle and a ring-shaped  tail light on both sides, which is highly recognizable when it is turned on. Its storage capacity is less commendable compared to the other two models. There is no storage space at the left and right sides of the handlebar, and the USB interface is designed on the control console under the left handlebar. But there’s plenty of space under the saddle for a full-face helmet and a half-face helmet and a few other small stuff. The opening and closing of the saddle is accomplished through two small pneumatic levers. There is no tail rack.

TARO Explorer 300 is powered by a 300cc (actual displacement is 275cc) single-cylinder water-cooled four-valve engine developed by TARO, with a maximum power of 19KW and a maximum torque of 24N·m. 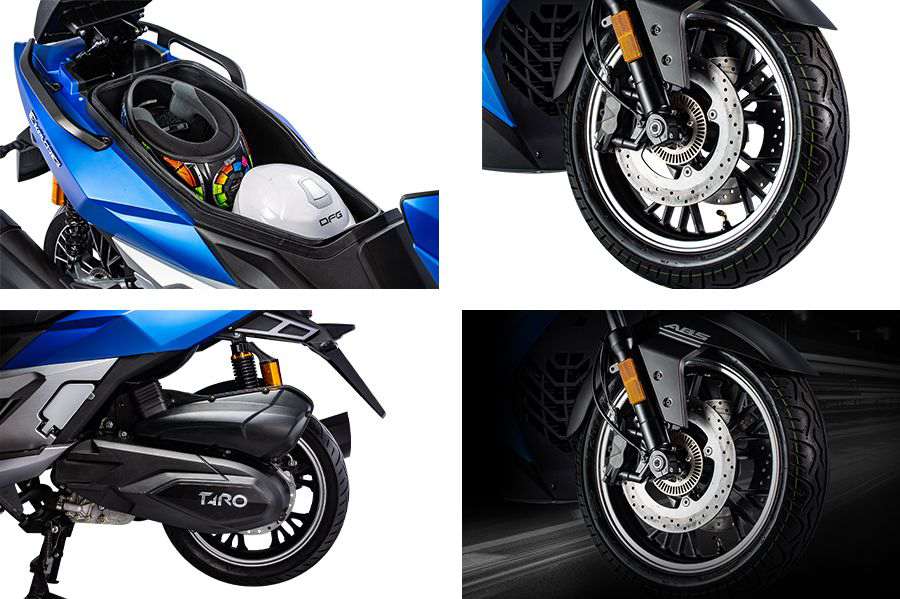 Summary: TARO Explorer 300 has LED lights, TFT screen, flameout-on-side support, and dual-channel ABS, and other high-end configuration. As a ground breaking work, TARO Explorer 300 is designed to break into the big scooter market with good configuration and attractive price, but it still needs continuous improvement to gain wider acceptance.

On December 18, 2019, DAYANG VOREI, DAYANG’s first big scooter model went on sale. To better understand the market and improve the product, DAYANG have carried out long-distance tests of more than 1,000 kilometers in the early development stage. VOREI is a highly expected model that has more impressive functionality and configuration.

VOREI has a V-shaped front face. The overall design is simple and clean. 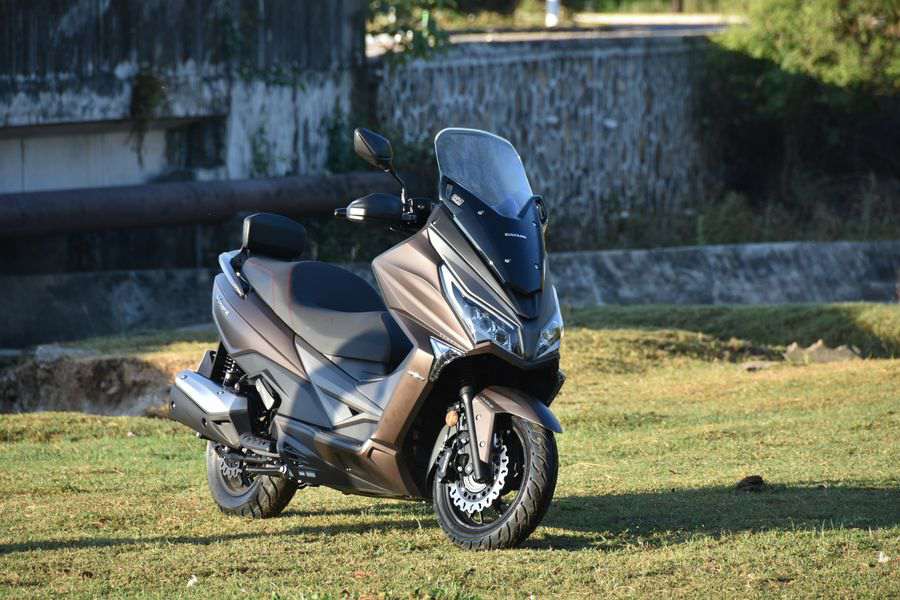 The headlight is LED light with six lens, the most luxurious headlight set in the current scooter models, which gives the best lighting effect among the three already introduced here. All other lights are LED lights. The taillight and rear turn signal are integrated to present a simple design and good lighting effect.

VOREI has a storage capacity consistent with the requirements for a recreational scooter. A storage container is designed respectively under the left and right handlebar. There is also a 12V power port inside the left container, while the USB port is placed at the middle position of the handle to easily charge external electronic devices. The space under the saddle is the same as Xciting 300.

VOREI adopts the mainstream front and rear disc brakes, with the front and back one-way double piston calipers. It also comes with the standard dual-channel Bosch 10.0 ABS. The front and rear wheels use the 120/70-14 and 150/70-13 tires.

VOREI is powered by DAYANG’s single-cylinder water-cooled four-valve engine, with an actual displacement of 299cc, a maximum power of 20kw and an maximum torque of 27.7N·m, which makes it a true 300cc scooter. At the same time to ensure high quality and stability, the engine parts are all imported. 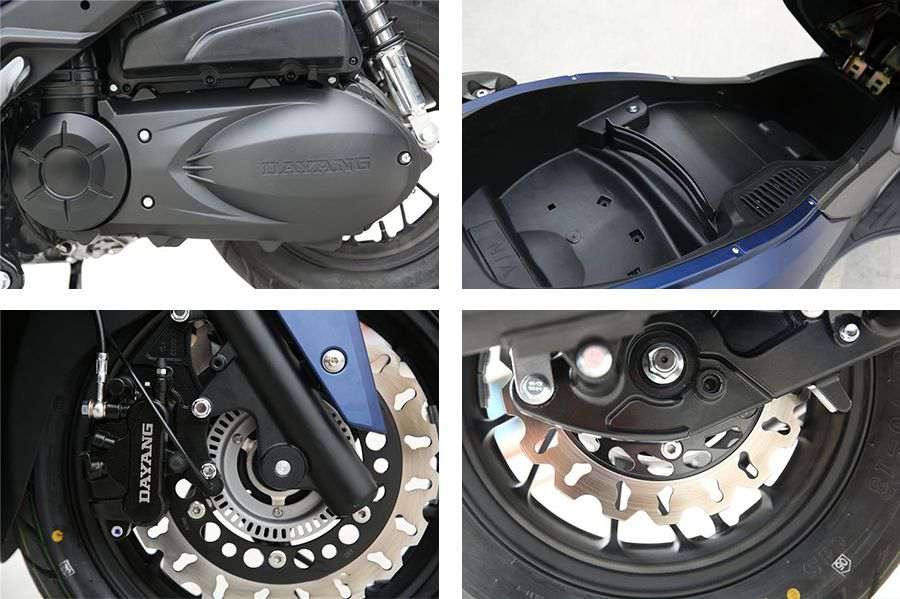 Summary: as the first big scooter, everything is considered from the perspective of consumer preference from the very beginning of development. Giving the standard dual-channel ABS, keyless starting system, the real 300cc engine, etc., DAYANG has gone all out to create VOREI a competitive product in the market.

In July 2019, Mr. Wu, general manager of ARIIC, and several engineers of the factory participated in the long-distance test of the scooter on the plateau. 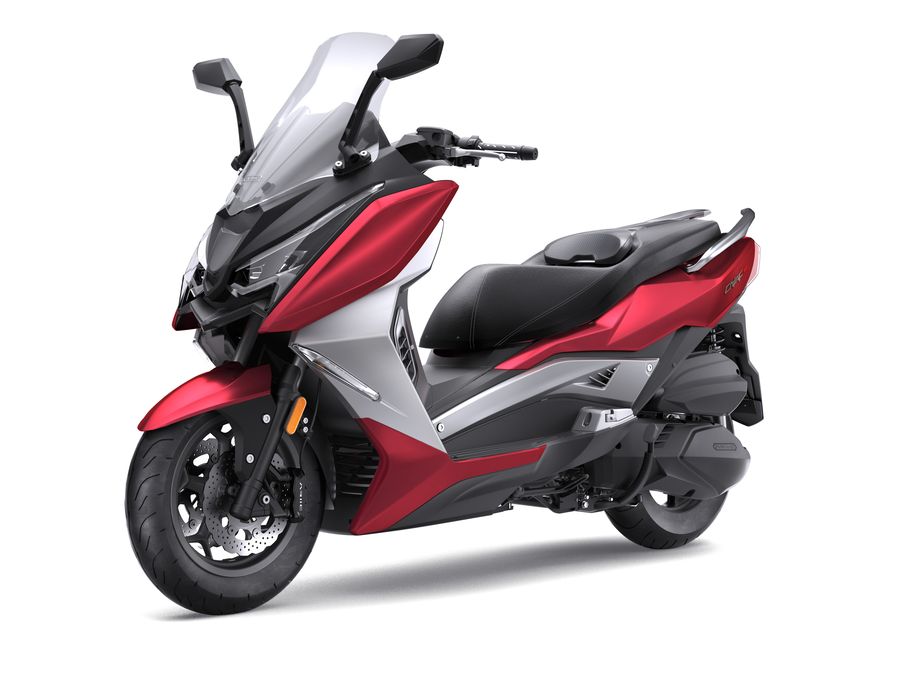 LED lights and the sharp front face give a deep impression. A camera is designed at the middle of the headlight, which can record the scenery on the road and can also be used as a driving recorder. It is a unique configuration not available on the other three models. 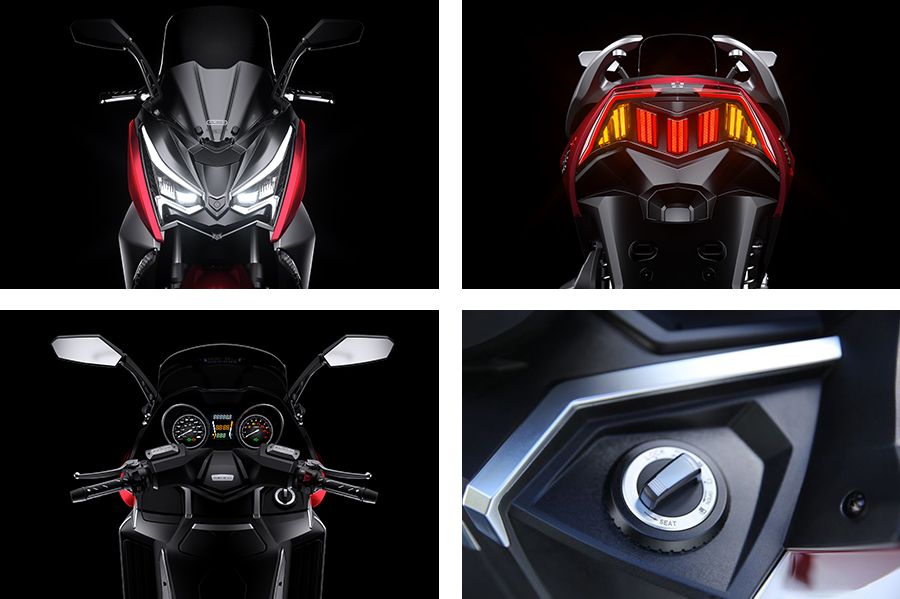 CHINF 318 also has high-end configurations, such as the keyless starting system and Bosch G10 ABS.

The engine, independently developed by Jinlang, is a water-cooled four-valve single-cylinder engine with an actual displacement of 275.6cc, a maximum power of 17.5kW /8,000rpm and a maximum torque of 25N·m/5,000rpm.

Summary: the Jiangsu and Zhejiang motorcycle brands take up more than half of the domestic market of medium and large displacement and differentiated models. ARIIC, with years of experience in scooter power, is creating CHINF 318 to be a promising product in the market.

Conclusion: good products are tested by the time and good brands are honorer by time. KYMCO is a leading brand in the scooter field: in 2019, the sales of above-250cc models totaled 19,000 units (including domestic sales and export), which proves its stable product quality and good reputation. TARO Explorer, seeking to win market share by lower price, needs more time to prove its success. ARIIC CHINF 318 is backed up by the high-end configurations as well as the brand’s strength in scooter power research and development. Finally, DAYANG VOREI learns from experience and makes the best of its products. VOREI is an attractive product with reliable performance and manufacturing process.