CYCLONE RE3 Interpret The British Retro Style With Modern Crafts British retro style becomes popular in recent years–it is delicate and elegant, with distinctive lasting appeal and style. With the improvement of people’s living standards, the pursuit of motorcycles has gradually risen to the spiritual level of reminiscing. The British retro style is favored by more and more people. Nowadays, with the support of modern technology, British retro style motorcycles become more sophisticated and high-end, intelligent and efficient, and achieve mass production, which is an inevitable result of the evolution of industrial manufacturing. How to find a balance between retro style and modern technology is one of the key points on retro bikes. 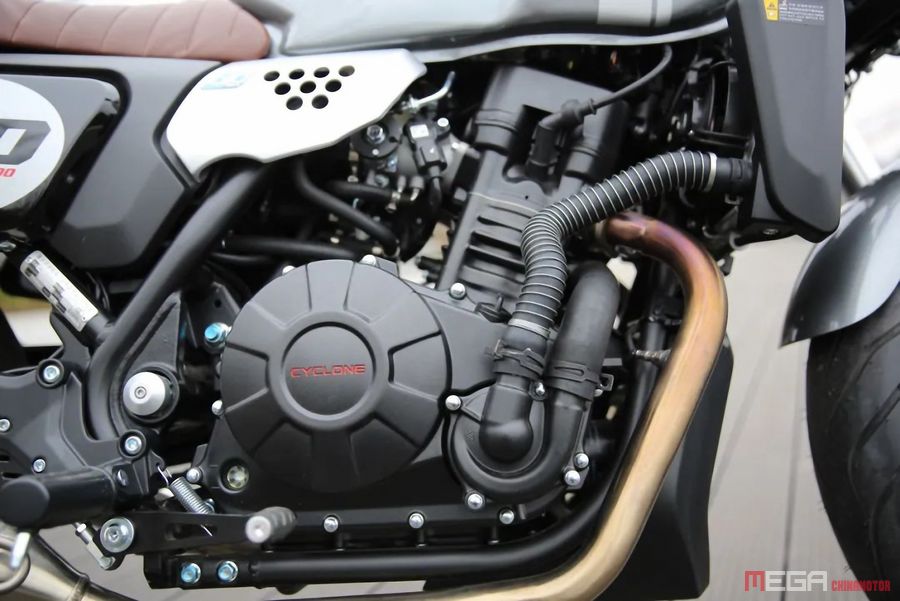 RE3 is the first modern British retro bike “originally” built by CYCLONE after more than 2 years of R&D. It is also the first middleweight two-cylinder retro bike among CYCLONE’s retro series. 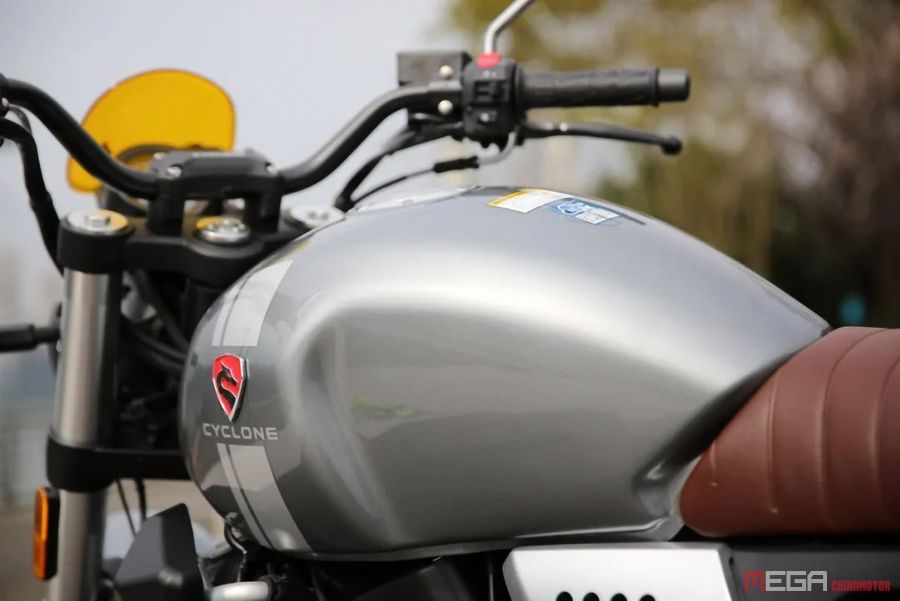 The overall style of RE3 is more concise. The front and rear wheels are mostly exposed (front fender is in a general modification state). The unnecessary exterior parts are removed. The two-cylinder engine fills a concise, compact and lean body. 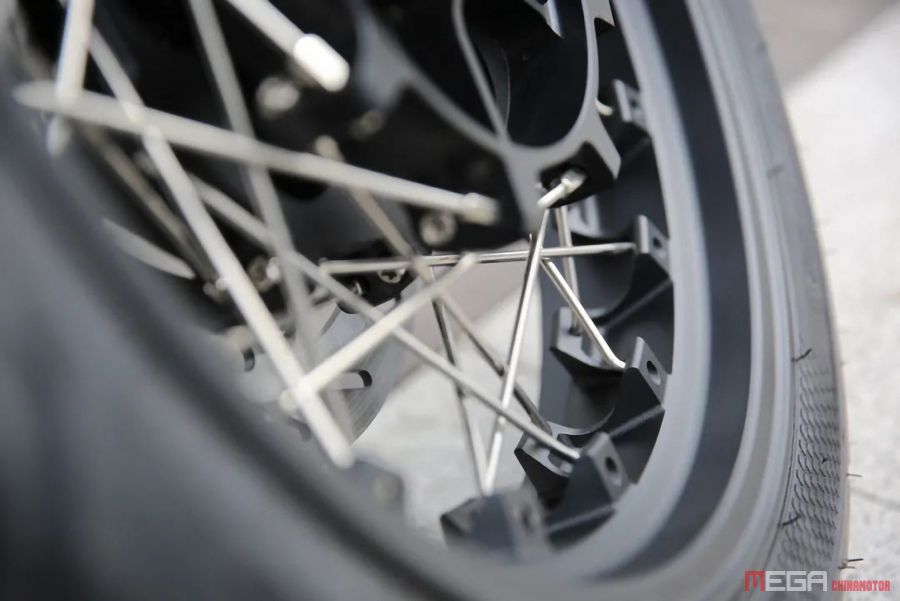 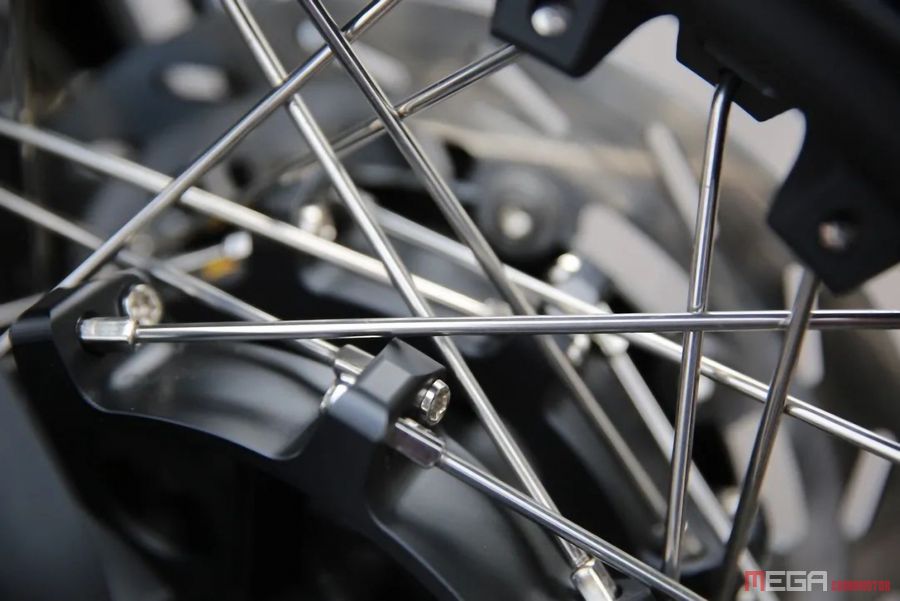 The one-piece brown leather saddle is obviously made for the comfort of daily riding, with the logo relief at the rear surface to add to the delicacy of the saddle.

The round lamp is the heritage of British retro bikes, but most users prefer LED lights with a sense of modern technology. Some world famous retro bikes also use LED lights and lenses for the headlight and taillight. In the same way, the combination of mechanical pointer and LCD instrument panel also considers both the retro style and modern elements. The round water-drop fuel tank uses two-component coating, which is of better quality and wear resistance compared with the common single component paint. The tank has a capacity of 19L to deliver a satisfying cruising distance. The wheel hub (modern version) is another big balance that integrates the traditional wire spokes and vacuum tires. The steel wires are reversely interlaced and fastened, and the tire core adopts CNC hollow machining to give a strong mechanical texture. In addition, RE3 is equipped with CYCLONE’s intelligent vehicle networking system. The motorcycle can be remotely controlled through the mobile APP, which can also diagnose fault, share information, and look for business information.

Before RE3 CYCLONE has launched the RX3S and RZ3S, which are built on the same power platform. The TC380 two-cylinder engine has a maximum power of 27kw/9,000rpm and a maximum torque of 35N·m/6,500rpm. It is matched with Delphi EFI, water cooling system and international 6-speed transmission.

RE3 adopts the high-strength cradle frame commonly used on classic retro bikes in the world, which can effectively alleviate the torque of high-speed turning and impact from the road.

With the advantage of ZONGSHEN’s intelligent system, the frame is welded by the robot that shows perfect details. The same power platform, coupled with the newly developed frame, provides RE3 with a different riding experience.

Retro bikes are more about “refinement”–a delicate retro bike is enjoyable even if you do not ride it. RE3 also values the details.

The front wires are neatly fastened.

Almost every screw is marked to show high quality.

It is originally provided with side and water tank protection plates made of quality materials.

The position and shape of the auxiliary water tank adds to the plumpness of the body, especially the engine area.

The fender is still made of quality materials, which though is likely to be removed in future use.

The rear braking oil cup and braking pump is covered by the rear pedal for protection and good visual effect purposes.

Conclusion: CYCLONE RE3 is an excellent two-cylinder British retro style bike among the same level of products in China. It integrates modern technology with British retro elements. It has additional equipment besides all the similar configuration on the same level of products, which is another advantage in addition to its appearance and power system.