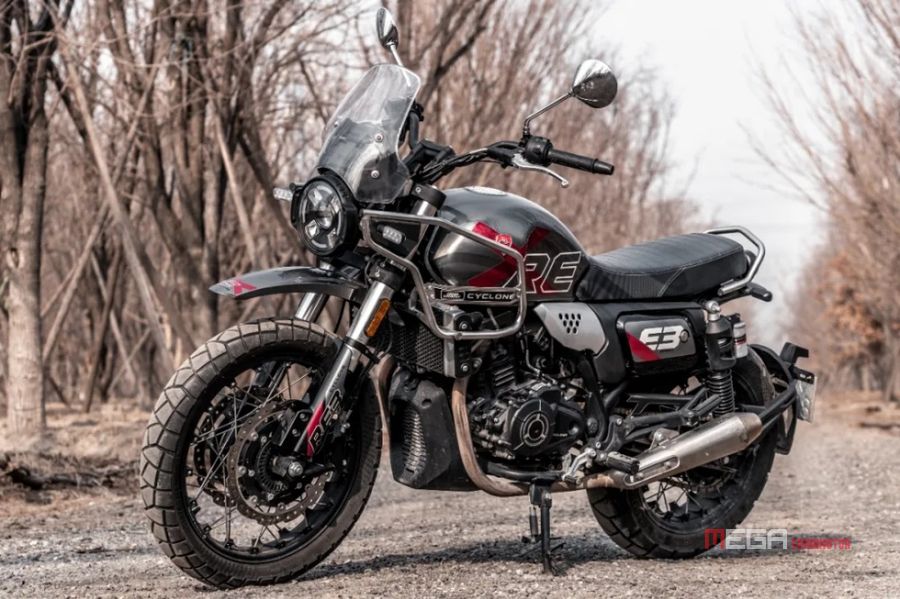 Cyclone RE3 series has become the first choice of many domestic retro bike fans since its birth. The reassuring quality as well as the diversified styles of the standard , modern, freedom and youth versions make it more inviting to young people. Now, on top of the several versions, Cyclone released a new version of the RE3 series–the scrambler version, which brings a more different feeling from the previous models, and demonstrates the most changes on RE3. 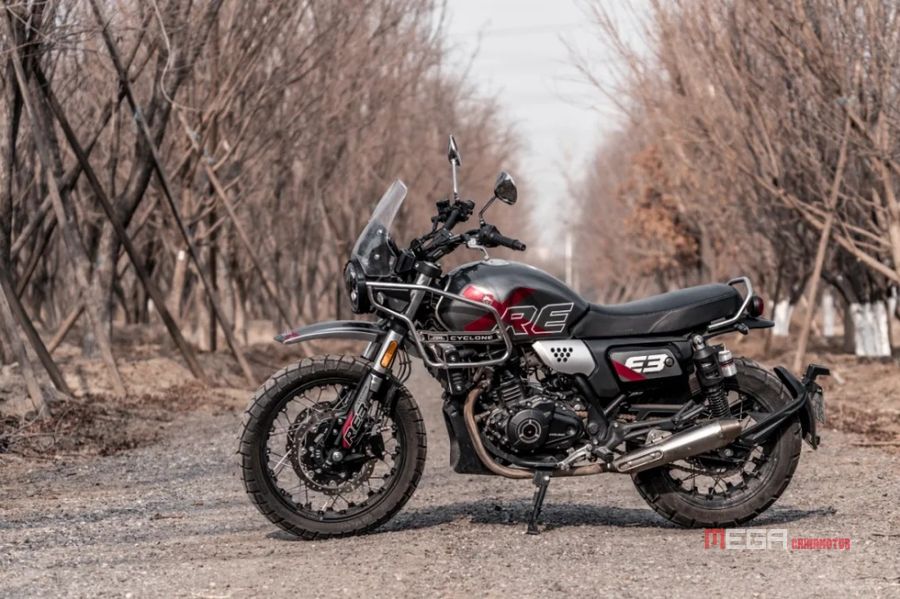 The Cyclone RE3 is more off-road than the standard version, giving a strong sense of a scrambler and a greater visual effect. It uses full LED light sources, the round headlamp with LED lamp beads is a harmonious combination of retro and modern elements. The front is fitted with a small windshield, which can shields part of the moving wind while adding to the motorcycle more wild nature. 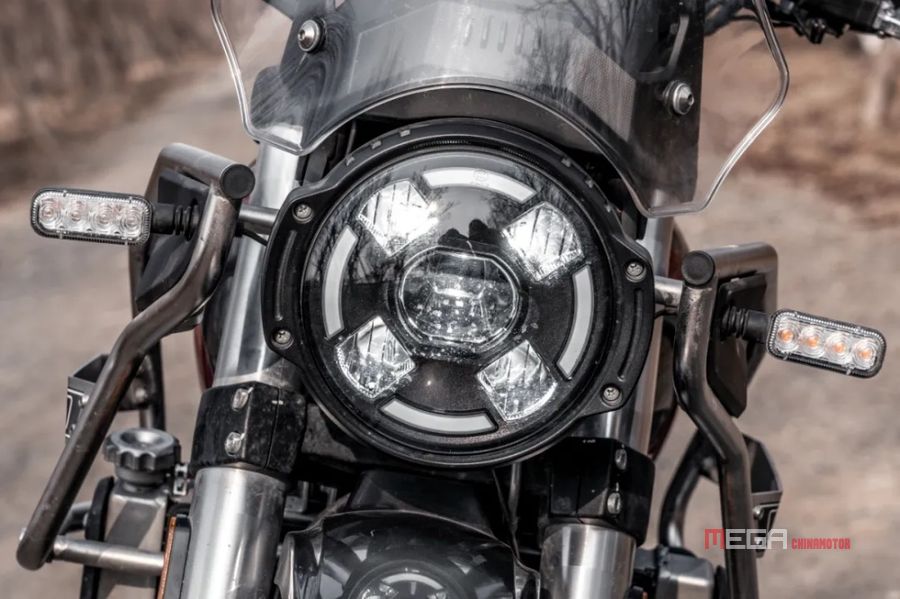 The two sides of the fuel tank are equipped with a bumper guard, which was never seen before in the RE3 series–it not only reduces the damage caused during accidental reversing, but also makes the motorcycle more stylish. The handlebars are 170mm higher than the regular version, which provides better control and ease your arms during riding. In addition to the conventional function controls on the left and right handlebars, there is dash menu control button to check multiple data; The right handlebar provides an ABS key and automatic headlamp switch function. The controls are backlit buttons. The TFT meter not only has a variety of UI interfaces, but also can be connected to mobile phone for navigation. Tire pressure monitoring is also indicated in the meter. There is also built-in 4G OBD to perform intelligent detection, real-time positioning, track recording, anti-theft and OTA remote upgrade functions through a mobile phone. The 19L fuel tank can deliver a cruising distance of at least 400 km. The front inverted shock absorber has a travel of 130mm, and the rear double shock absorbers have gas cylinders. It has front 110/80-19 and rear 150/70-17 spoke wheels to match Timsun all-terrain tires. The motorcycle is powered by the two-cylinder water-cooled TC401 engine, with the actual displacement of 401cc, the maximum power of 31.9kW, and the maximum torque of 34N.m. It is equipped with FCC sliding clutch. 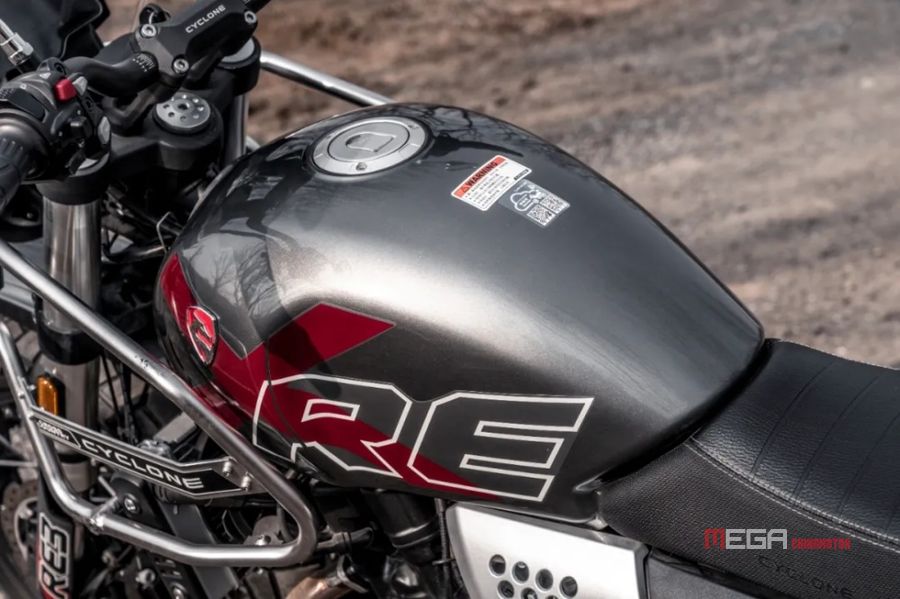 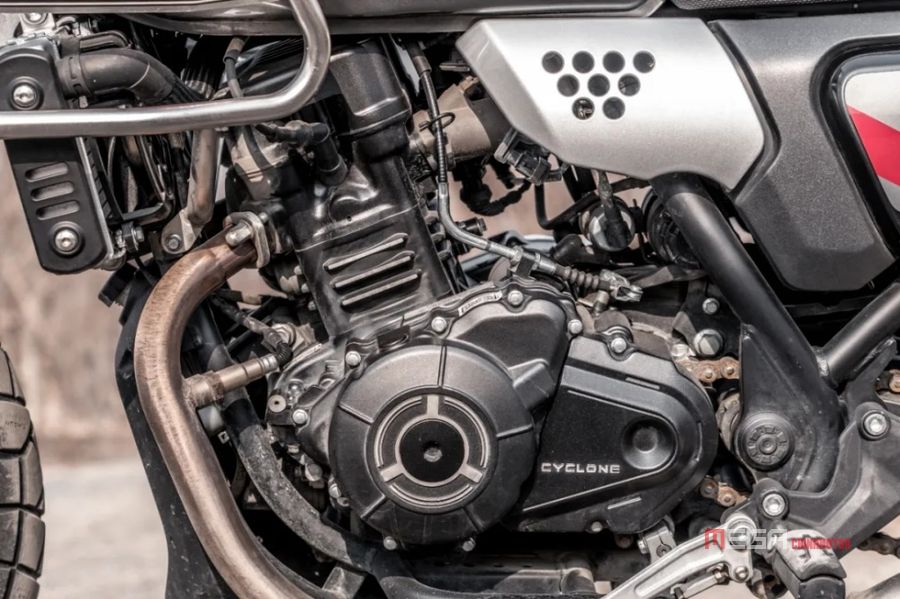 Sitting on motorcycle, the most obvious differences are that the sitting position is higher than the standard version, the cushion is slightly stiffer, and the handlebar angle and height are closer to that of a scrambler, making it easier to rest your hands on the handlebars. Of course, the height of the handlebar is not designed primarily for relaxation, but for easy control of the handlebar while riding off-road.

It seems that Cyclone has changed the pedals more for off-road riding purpose. The gear lever and rear brake pedal can be easily controlled even for a standing riding posture.

The riding posture is more suitable for bad road conditions. In the meantime, it is originally equipped with all-terrain tires to provide good road holding on unsurfaced or gravel roads.

The performance of the front and rear shock absorbers on bad roads is also commendable. You can feel the effective compression and rebound of the shock absorbers. Although the motorcycle shakes back and forth crossing bumpy road sections, you do not feel bumpy or vibration at the handlebar. Back on city roads, the scrambler version’s higher handlebars allow for a more relaxed ride and more natural control at small turns.

The engine is still the familiar TC401. The acceleration at low revs is fierce, and starting acceleration is rather responsive. When riding at high speed to overtake other vehicles, the engine still provides an explosive force. When the tachometer turns to the red zone, an obvious force is pushing the motorcycle forward.

The cushion feels stiffer than other versions, which makes long-time riding at high speeds a bit tiring. However, the engine vibration has improved, and even the low-rev vibration is not very obvious.

The front tire size is increased to 19 inches compared with the standard version, but there is no loss of flexibility and directionality. When you want to change lanes quickly or avoid obstacles, the whole body can still respond in time and you feel easy to control and achieve what you expect.

When driving into bends, the front and rear shock absorbers no longer feel soft as on the off-road surface, instead you can feel sufficient support force. Normally, you can easily ride out of the bends. 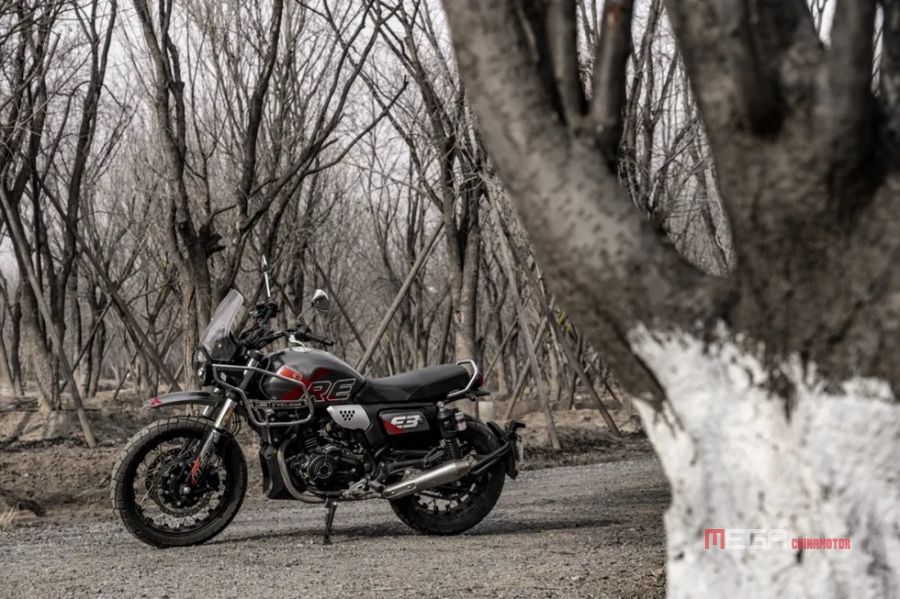 As a major model of the Cyclone retro series, the RE3 scrambler version once again offers a great option for those who want to ride a scrambler. It has good looks, quality and strength to provide riders with better entertainment experience. In addition, it is more capable of exploring cross-country, adventurous riding scenarios to challenge yourself, improve your skills and enjoy different riding experience.