DAYUN is a traditional motorcycle enterprise with deep technology precipitation. In the past years due to the shift of business focus, DAYUN did not frequently appear in the motorcycle world. With the improvement of the motorcycle environment, DAYUN will bring more models to customers. DY300-2F is one’s its products in focus. DY300-2F’s overall appearance design draws experience from foreign brands. With triangular headlight+four LED bulbs, it looks like a ready-to-attack python. The turn signals under the headlight also gives an aggressive posture. This is a more acceptable design to young people.

DY300-2F has a blue tone. Apart from the front fender, headlight decoration plate and fuel tank, the rest parts are in black. The overall body line is smooth and sharp, simple and delicate. A traditional decal with the bike’s Chinese name is designed on the fuel tank.

It adopts the Delphi system, the maximum power is 21.5/8,500(kW/rpm), the maximum torque is 27/6,500(N·m/rpm), whose power ranks the upper level in domestic 300cc models but torque is a little higher than the other models with the same displacement. In other words this bike can give you much more poke. DY300-2F’s top speed is 135km/h.

DY300-2F adopts the front inverted and the rear central shock absorbers, which can be adjusted according to the user’s needs.

The fuel tank capacity is 15L, with a officially claimed fuel consumption of 3.6L/km and a cruising range of about 370km. This is quite enough for a street bike and also competent in long-distance travel occasionally.

It uses the Japanese FCC clutch and throttle cable, a little easier to pinch clutch.

The instrument adopted popular digital style. It is worth mentioning that the rev information is not in the traditional digital style, but a light bar–white light before 9,000rpm and red after 9,000rpm, which is a good reminder of rev change and throttle control.

The seat height is 785mm, allowing a 178cm rider to touch the ground with both feet. It is a split type cushion. The curb weight is 170kg. 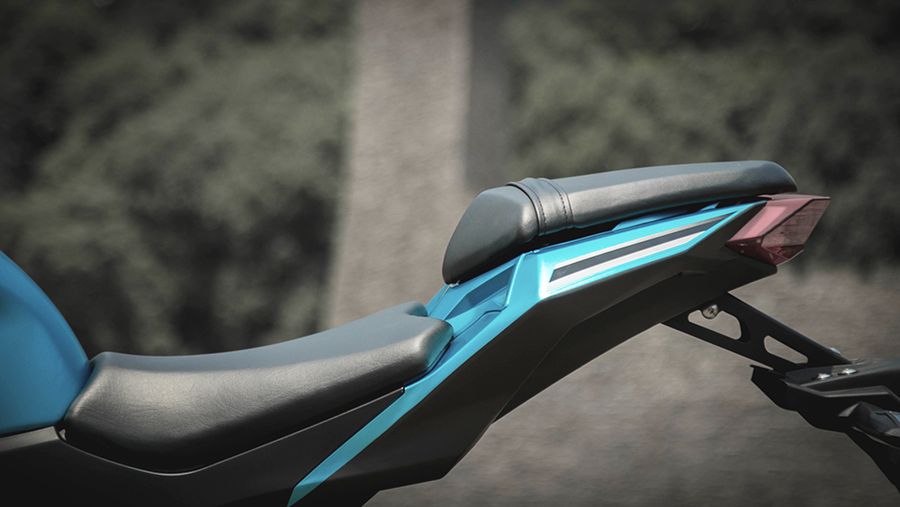 DY300-2F is designed with a front double-disc floating four-piston disc brake matched with ABS to improve the rider’s confidence and safety.

This bike is equipped with front 110 and rear 150 CST wide tires to conquer all road conditions, no matter riding on the mountain or running in the city. In addition, it has imported cable plug, imported NGK spark plug and original imported oil seal, which shows that DAYUN has took a lot of care for this bike.