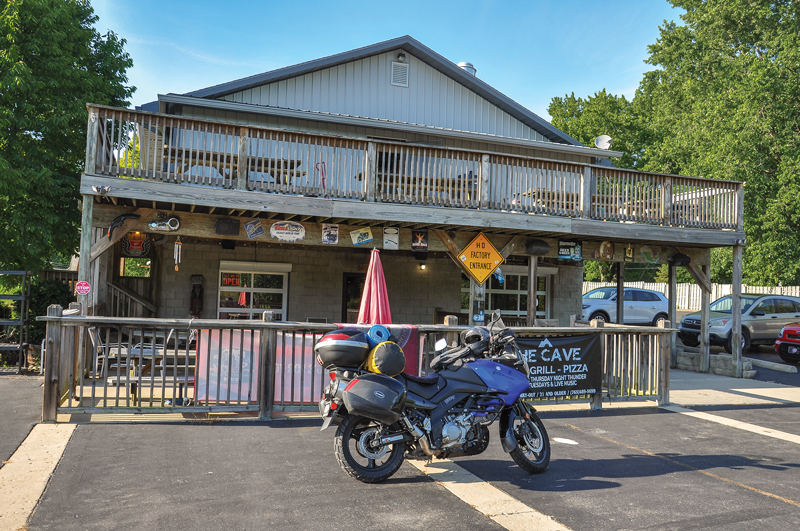 December 18, 2019
Posted by: chinamotor
No Comments

Despite being a lifelong Hoosier, I hadn’t spent much time riding in the southern part of Indiana. This year would be different — I had a family reunion coming up in Bloomington, only four hours away from home in Valparaiso. I also had some rare extra days off from my mill job, so I thought I’d meander my way there instead of taking the direct route. Using secondary roads exclusively crossed my mind, but I didn’t have that much time.

I headed east on U.S. Route 30, then south on U.S. Routes 35 and 31. Thankfully, the rains that plagued us for weeks had finally stopped. Indiana is squarely in the Corn Belt, but the crop in our part of the state was pretty much toast due to the wet conditions. This was painfully obvious mile after mile, as stunted seedlings were barely at the ankle. The old saying is “knee high by the Fourth of July,” but with modern hybrids, most years the stalks are at the shoulder or better by late June.

North of Indy I jumped on State Highway 38. I’d noticed a scenic route designation on the map for State Highway 1, starting at Hagerstown, less than 20 miles from the Ohio border. The town is also just above the imaginary line that separates the state into north and south — as good a place to start as any. There was even a motorcycle-friendly eatery, Dave’s Café/Flatlanders Motorcycles. The Harley parked among the pool tables made my burger taste all the better. As poor luck had it, I’d showed up the day before their weekly bike night. Still, this was shaping up to be a good ride.

The Whitewater Canal Scenic Byway offers a snapshot of 19th-century American travel: river, canal and rail. I’d heard at the Greens Fork Family Diner it was also a fine motorcycle road. The report was accurate, with smooth pavement, abundant curves and frequent elevation changes, features that riders seek out but are rare north of the dividing line — especially the smooth part. Plank roads aren’t represented, but there is a heritage railroad running between Connersville and Metamora that features a restored section of the Whitewater Canal that once stretched 76 miles, from Hagerstown to Harrison, Ohio. Construction was a major engineering feat due to the steepness of the route, requiring 56 locks and seven dams, and the costly project drove the state into bankruptcy for a time.

I’m a fan of big rivers. I enjoyed riding the Mississippi and Missouri river valleys a couple of years ago in the Show Me State. Since I was close to the Ohio, I figured I would check it out. I was particularly interested in how it compared to those two flooding-wise, as my Missouri route was often dictated by water-related closures. But the first diversion was due to construction, not flooding. Instead of Lawrenceburg, where the river enters Indiana, the detour put me a few miles downstream in Aurora, where I picked up the Ohio River Scenic Byway. The Hoosier State segment covers 302 miles and follows several Indiana State Highways, 56, 156, 62 and 66, which meld together rather seamlessly. The distance suggested a lot of curves and didn’t disappoint.

Among American waterways, the Ohio is second only to the Mississippi in volume of water discharged. It has been described as a series of strung-together reservoirs, built and operated by the Army Corps of Engineers. As such, it serves many of the same functions as other Corps projects, such as drinking water, recreation, flood control and shipping. Barge traffic was abundant. I stopped a couple of times at riverside parks to watch the towboats do their magic. A century ago, the river towns catered primarily to businesses. Now tourism is a big economic activity as well.

Given the combination of good pavement, hills, curves and friendly locals, unsurprisingly there were lots of motorcycles on the byways. On one construction reroute, where it took 50 miles to go 10, two Harley riders gave chase. They weren’t dressed for a crash but pushed me hard on the straights and sweepers anyway, then I’d walk away from them in the tighter curves. We repeated the pattern several times. Fun!

I’d always wanted to visit our first Indiana state Capitol building, in Corydon. Just off the byway and easy to find, the tidy limestone structure is dwarfed by the current rendition in Indianapolis. But it was doubtless a big undertaking for the fledgling state in 1816. Unfortunately, it was closed for the day, a constant aggravation on my rides when visiting historical sites.

The afternoon was fading when I encountered another reroute. I wondered if this one really was due to flooding, as the stretch ran right along the river. Water or roadwork, I never found out, but I’d neglected to top off the Suzuki V-Strom’s tank in Jeffersonville and the blinking fuel gauge was making me nervous. I’d passed through several small settlements, but none with gas available. Luckily, the Derby General Store was still open. One of the pumps offered ethanol-free 90-octane mid-grade, rare in my corner of the state, and the Strom loved the unadulterated fuel. The attendant clued me into a shortcut that didn’t show as connecting on the map. It allowed me to see the dam at Cannelton, which the sanctioned route bypassed. I don’t use a construction avoidance feature on my GPS; folks that live in an area can generally advise the best route anyway.

Derby also carried a grim reminder of the potentially destructive power of big rivers: flood lines spanning eight decades posted on a utility pole. Like the Mississippi and Missouri, the Ohio sometimes jumps its banks despite man’s best efforts to tame it. But even with the proximity of big water and recent heavy rains, the corn crop in the area was comparatively healthy. One lush field shared space with another common Midwestern fixture, the oil pumpjack.

I stopped for the night in Evansville, an easy enough town to navigate considering its relatively large population. I often wish I’d been born in the southwest rather than the northwest corner of the state. The milder winters, better roads and laid-back lifestyle are big plusses. The next morning, I rode the remaining 25 miles of the Ohio River Scenic Byway to where it crosses the Wabash River into Illinois, then doubled back to Mount Vernon to begin the trek back north on State Highway 69.

I had the whole day to make it to Bloomington, so I stuck to state highways. They passed through endless farmland and the occasional small town. I prefer mom-and-pop diners, and one of the best indicators of quality food is pickup trucks in the parking lot; if the fare is substandard, the locals won’t patronize. JJ’s in Cynthiana looked promising. A man I guessed correctly to be JJ stood behind the register, hands on hips, looking me over, and asked, “What’d ya need, captain?” “How about a menu,” seemed the obvious reply. He shot back, “You sure you can read?” as he handed me one with a smirk. Then he put on a fresh pot of coffee, not so much for me, but for the lunch crowd about to arrive. Like clockwork, trucks of every description soon moved in. I hung out for a while, talking bikes, farm equipment, weather and steel mills.

ABATE of Indiana is a robust motorcycle rights organization. Twenty years ago, it purchased 400 acres in Lawrence County to host its annual fundraising party, the Boogie, which is dubbed the “Midwest’s Best Biker Fest.” The property has since been developed into a full-service off-road riding area with 60 miles of trails, campgrounds, showers and RV hookups. The Lawrence County Recreational Park is off the beaten path, but worth a visit. One day, I’d like to give those trails a try. The Indiana Motorcycle Safety Memorial is at the park’s entrance, dedicated to fallen Hoosier riders. The memorial grounds are impressive and made my detour worthwhile.

Bloomington is smack in the middle of some of the best motorcycling in Indiana. My youngest daughter once rode with me there. She said it felt like “riding through a tunnel,” as we motored under the canopy of trees that covers many of the highways. I’m not complaining, but at times the hills and curves became almost overwhelming. Once, I dropped my guard and almost overshot a tight turn. But I knew in a few hours I’d be back on straight and boring roads, with a large helping of potholes thrown in, so I enjoyed the squiggly lines while I could. Efficiency dictates that major highways cut the hills down to level the run, but rest assured there are still many miles of unmolested pavement in southern Indiana.

U.S. Route 231 was my chosen route home, avoiding the interstate. The dry and beautiful Saturday night brought out bikes by the score. In Crawfordsville, a chapter of the Iron Order with dozens of rumbling steeds had gathered for a run. I waved and they waved back. We were all on V-twins, albeit built for different styles of riding, but it didn’t matter. At West Lafayette, I once again overruled the Garmin’s choice of I-65 and picked up State Highway 43, then U.S. Route 421 for the last 70 miles. It’s weird, but after all the curves and hills, the arrow-straight run that I’ve made many times was strangely satisfying.

The Ohio River Valley is now on my list of favorite places. The byway hugs the river for many miles and I’m glad I ran the Indiana section almost beginning to end. I only wish I could have spent more than a day taking it in. Two or three would’ve been better, as there’s much to do and see. I’m always searching for the perfect ride. Turns out one of the best has been in my backyard all along.