November 17, 2022
Posted by: chinamotor
No Comments 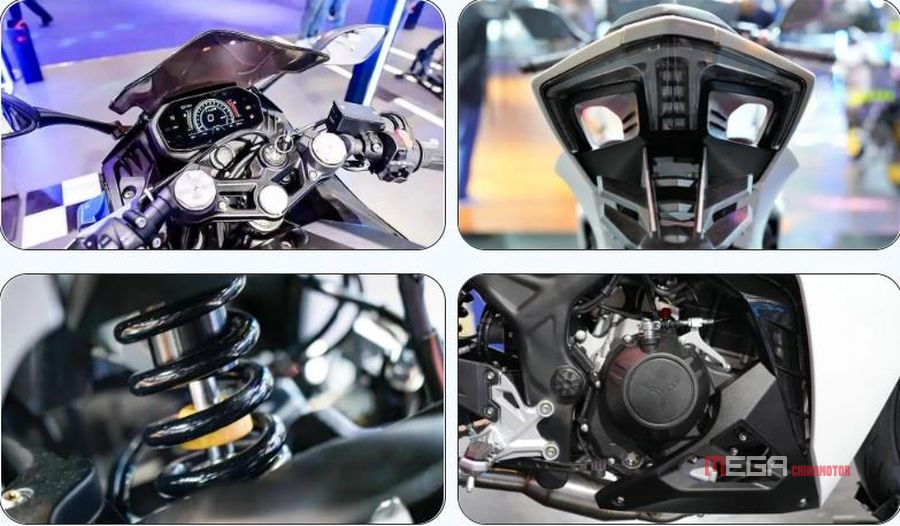 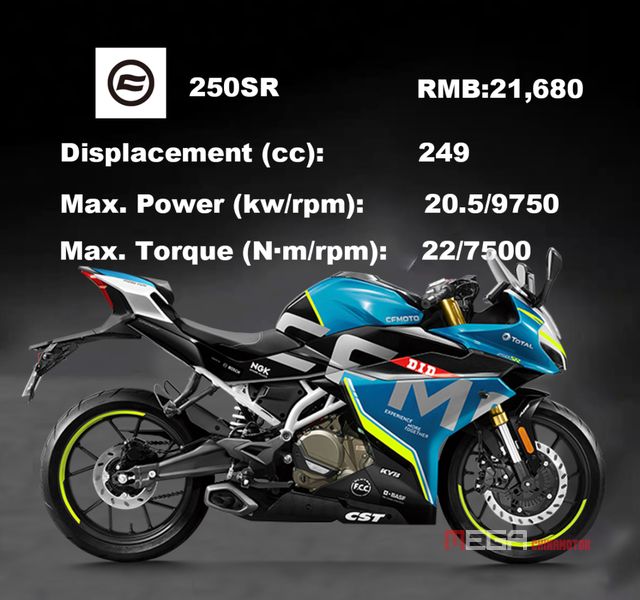 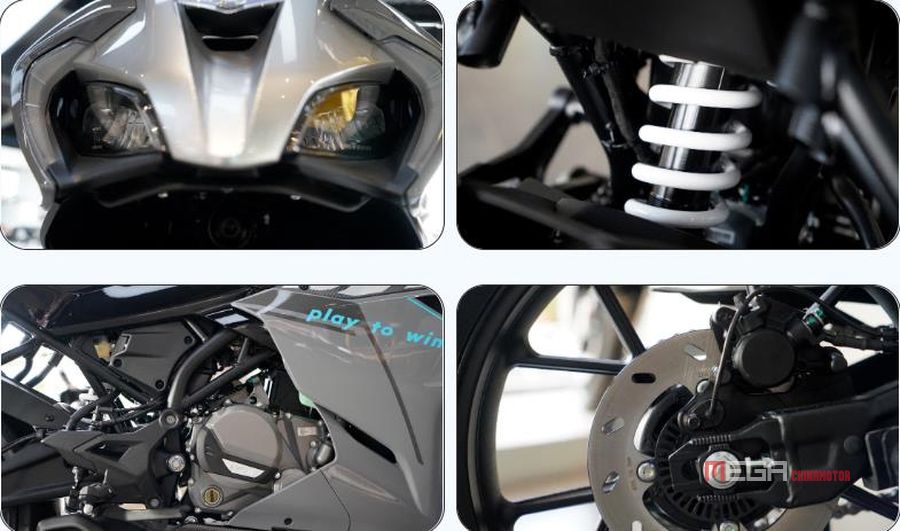 CFMOTO 250SR track version MY22 (MY22 for short), MY22 has not made a great changes in the overall outline, which maintains the appearance characteristics of the CFMOTO SR family. Differently, the pattern is more fancy, in line with the individual needs of young people. Moreover, the riding experience is more comfortable because of the fixed wind wing and single rocker arm.

Although MY22 still adopts 249cc single-cylinder water-cooled engine, it has a maximum power of 21.5kW/9750rpm and a maximum torque of 22.5 N·m because of the adjustment, which are respectively 1kW and 0.5 N• m more than the old model. There seems few changes, but it will change a lot in the power performance with the weight loss. 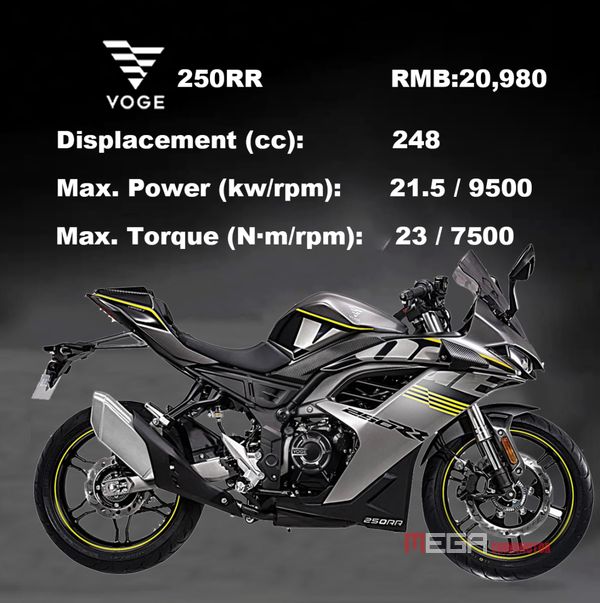 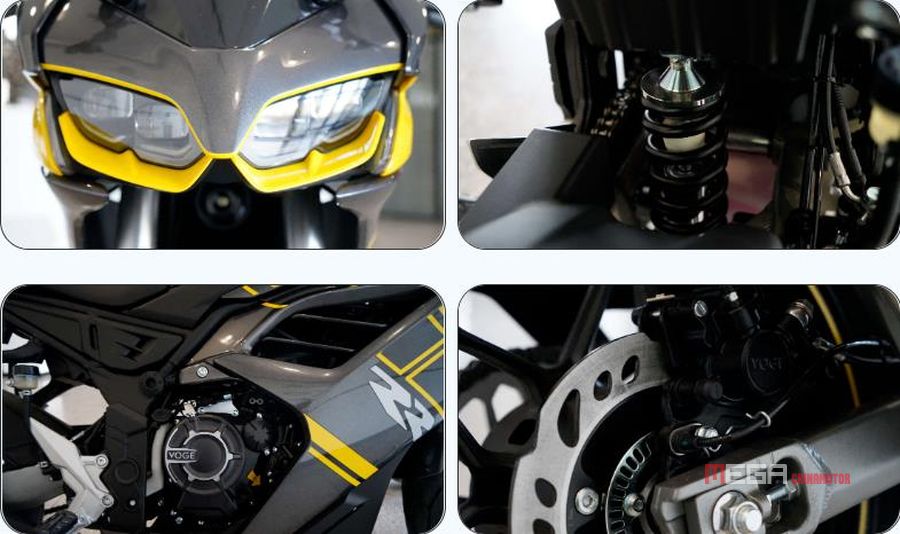 In terms of power, the 250RR is equipped with a single-cylinder four-valve engine KE250, with a maximum power of 21.5kw/9500rpm and a maximum torque of 23N.m/7500rpm, which is already top-notch in terms of data. In addition to the sliding clutch, the weight of the vehicle is 147kg. As for the acceleration, the acceleration time from 0 to 100km/h is 7.5s after the repeated measurements. A rider, who is 40 kg, completes an best acceleration time of 7.0 seconds so that VOGE 250RR can rank first among domestic 250cc sports models. In addition, the speed is 119km/h when the oil is cut off at the 4th gear. VOGE claimed that the gps displays 140km/h, which is in line with reality.

During the acceleration process, the gear is shifted easily. The whole vehicle is still stable even at high speed state although it is an ultra-light model weighing 147 kg. What is commendable is the throttle response of this engine in that the speed can be risen extremely quickly, and the fuel was cut off naturally during the acceleration test. The top speed is 11000rpm, and it rarely cuts off the oil in daily use. In addition, the performance of low-to-medium rpm is more obvious. The engine starts to output continuously from 3000rpm, with the extremely sensitive throttle response. Its power is provided conveniently.

During the acceleration process, the shifting gear is light, there is a clear sense of intake, and the tuning is good. At high speed, the whole vehicle is stable. Although it is an ultra-light vehicle weighing 147 kg, it does not feel fluttering at high speed. What is commendable is the throttle response of this engine, the speed rises extremely quickly, and the fuel was cut off inadvertently during the acceleration test, and the throttle response performance is perfect. The limit speed is as high as 11000rpm, and it is rarely pulled to cut off the oil in daily use. During the acceleration, I found that this engine pays more attention to the performance of low-to-medium rpm. It starts to output continuously from 3000rpm, and with the extremely sensitive throttle response, in daily use, the power can be said to be on call, which is more than enough for walking on the street.

The dimension and wheelbase of Tornado 252R are 2050x770x1130 (mm) and 1410mm respectively, with the weight of 177kg and the seat height of 785mm. According to the data, Tornado 252R is more popular by optimizing its structure and ensuring the balance between comfort and sportiness by adjusting the riding triangle.

Tornado 252R can produce a maximum power of 19.2kW at 8500 rpm, and Iit can output a maximum torque of 24.1N·m at 6500 rpm. Judging from its parameter, this model has a better ride comfort in that the low-torque output of the engine is further enhanced. Therefore, the actual power performance of the Tornado 252R is close to that of the 300cc models, whose overall performance is really worth looking forward to.