In 2016, LONGJIA launched the BUCCANEER 250i, a Cafe Racer becoming popular with its original retro style and a 250cc V-twin engine. In the following two years, LONGJIA launched the touring cruiser NEVADA 250i, which also won the recognition from motorcycle fans with accurate positioning and fine workmanship. Recently, LONGJIA introduced a new model — V-BOB (LJ250-5V).

The LED headlight adds technical elements to V-BOB. The outside of the headlight is composed of the LED lamp ring and two lenses, simple and stylish.

The variable-diameter straight handlebar makes one of the classic elements of American cruiser, simple and straightforward. The hollowed steering column is heightened and there is scale line on the handlebar. The electric lock is placed on the right of the frame riser, and the left side is provided with a USB charging port.

The fuel tank has a capacity of 20L, with a bold appearance. The combined instrument with mechanical and LCD screens and the fuel tank are positioned up and down.

It has a split type leather seat. The front half is a saddle design, with proper comfort. Due to the short tail design, the backseat is short, and a backrest can be added.The rear rack can be not only used as a handrail but also used for moving the motorcycle and fastening bags.

The LED taillight, embedded in the backseat cover, is matched to the short tail to be more compact.The separate fender, also being concurrently the license plate frame, is fixed by steel pipe from the two sides, practical.

The combination of the front and rear disc brakes and the CBS improves the braking effect. The front inverted and rear double spring shock absorbers are supplied by YU’AN. The surfaces of aluminum alloy star wheel hub and the wheel blade are all polished, showing more metal texture.

V-BOB is inspired by the classic design of FAT BOB, with a forward-leaning pedal and a straight handlebar, which makes you sprawl and the short haul more comfortable.

maximum torque of 17N·m/5,500rpm. It is air-cooled and matched with an international 5-speed transmission. The unique V-shaped cylinder structure makes the motorcycle look plumper. The cylinder head is covered with a silver shield, and the surfaces of the cooling fins are polished. Between the cylinder head and the shield there is anti-scald cotton, which is very considerate.

The single-side double exhaust pipes make the motorcycle look even plumper from the right side. There is ventilation grid designed on the protection net of exhaust pipe.

The belt drive is another feature of V-BOB. Compared with the traditional chain drive, the belt drive has the advantages of absorbing shock, reducing noise, easy maintenance and higher transmission efficiency, which has higher requirements for belt strength and manufacturing technology. V-BOB adopts Continental’s imported belt to ensure belt’s strength and transmission efficiency. V-BOB is the first domestic cruiser featuring both V-twin and belt drive.

The 715mm seat is suitable for riders of various heights. The test rider, 172cm tall, makes a good harmony on the motorcycle.

After starting the engine, the V-twin generates rich exhaust sound. During daily riding, the rider’s upper body keeps upright and the arms are relaxed. The distance between the arms and handlebar is within the normal range, and the comfort is not affected. It is suitable for daily riding and short hauls on weekends.

The visual effect of the straight handlebar is very special, but a newbie needs time to get used to the meter’s position.

The motorcycle’s left-leaning limit is relatively large, so pedal rubbing requires technical accumulation. The relatively short wheelbase also adds to its flexibility. Relatively speaking, the right-leaning limit is smaller, and the exhaust will touch the ground before the pedal, which is likely to cause anxiety for a novice. But it will be so much fun for a veteran.

The performance of shock absorber feels relatively hard. When passing through the speed bumps or manhole covers at around 50km/h (meter reading), there is relatively obvious vibration, and it feels more intense on the backseat. It may be better when the rear shock absorber is adjusted to be soft after the run-in period.

V-BOB’s power output is gentle. Limited by the displacement and engine technology, the rev increase is relatively slow and stable. Power output is not so forceful at mid-to-high revs. The maximum torque of 17N·m is achieved at 5,500rpm, so the initial acceleration is faster, which is very suitable for urban commuting. The engine vibration is well controlled, no obvious vibration during the test ride.

V-BOB provided a just satisfactory riding experience. The cool look attracts a lot of attentions. If you want to have a motorcycle for transportation in the city and demonstrate your personality at the same time, V-BOB will be a great choice. (Source: www.newmotor.com.cn) 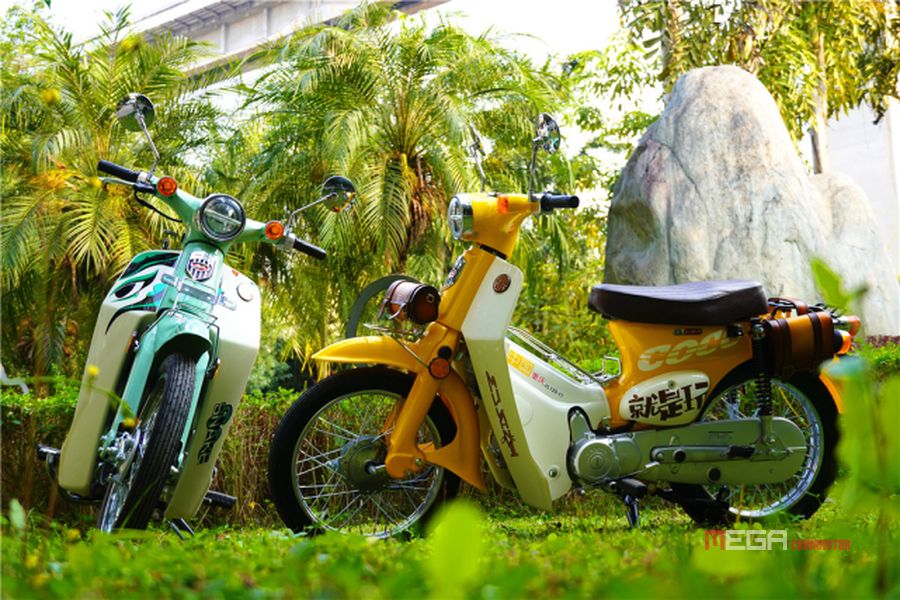