2013 saw the sales and production of motorcycles in China drop to its lowest point since 2007, reflecting the impact of the previous two year’s decline in the market for Chinese motorcycles. This was mainly due to the continued decrease in the domestic motorcycle market, as total export volume for Chinese-made motorcycles was up 2.6% year-on-year. With the export market showing more promise for growth than the domestic market, Chinese manufacturers were keen to capture more export market share, leading to companies such as CFMoto, Benelli, Zongshen, Shineray, Loncin and Qingqi intensifying their focus on R&D in developing unique products.

In the face of mediocre sales in China (nationwide sales figures are hardly more impressive than those from Milwaukee), Harley has doubled down and introduced 8 new models and opened a new dealership. This is partly due to strict government regulations and the slow growth of big-bike riding culture.

March – The EPA levies a $630,000 fine against American Lifan for breaches of the Clean Air Act

The United States EPA (Environmental Protection Agency) has fined the Ontario, California based American Lifan Industry, Inc. for breaches involving 28,000 motorcycles, vehicles and engines that didn’t meet the standards set out in the Clean Air Act (CAA). The breaches also included problems with record-keeping and voiding of certificates of conformity which affected vehicles sold between 2007 and 2011. The EPA levied a civil penalty of USD$630,000 against the importer. Benelli releases their new BN302 sports motorcycle. Following the release of their BN600GT, the BN302 is an impressive looking motorcycle, targeting the learner bike market. Although a little heavy at 185kgs dry, the engine produces a hefty 37 horsepower, outclassing any other Chinese produced engine in its class.

Benelli releases their new touring motorcycle, which uses the same inline-four 82 horsepower engine as their BN600 street-naked motorcycle. The BN600GT (Chinese version) is being sold in China for ￥49,800 plus tax.

May – Lifan signs with Infineon

On May 18th, Lifan signed an agreement outlining a strategic partnership with Infineon Technologies AG, a global leader in the development of semiconductor systems. The technical collaboration involves both companies working closely together on joint automobile and motorcycle EFI platforms and ECU application platforms.

CFMoto’s 650NK set a new record as the first Chinese-made motorcycle to finish the 2014 Isle of Man TT. Dedicated rider Gary Johnson qualified 7th with a 19 minute, 51 second lap time and an average speed o114 mph. Unfortunately, Gary injured himself in the days leading up to the race and Rider Callum Laidlaw had to step in to race his very first TT.He used the factory standard engine and suspension, and had a best lap of 21 minutes 20 seconds and reached a respectable top speed of 106 mph. 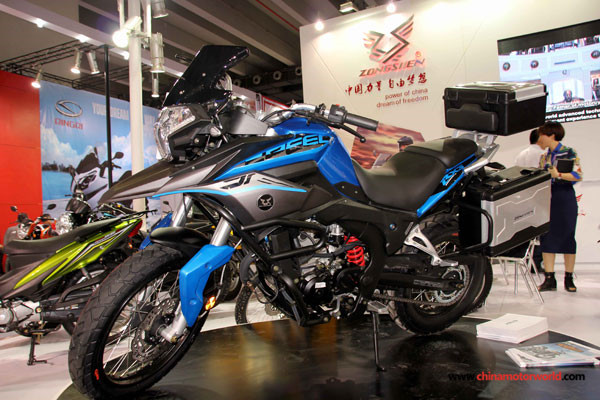 September – CSC confirms that it is bringing the Zongshen RX3 to the United States.

Known in China as the Cyclone RX3, this model will be sold in the U.S. with a CSC (California Scooter Company) badge. Zongshen had initially entered the U.S. market on their own, but exited the U.S. market in 2011. Now it seems as though their strategy is to partner with already established brands to help bring their models to a discerning market. This motorcycle has seen good sales volume in China, and Steve Seidner, President of CSC Motorcycles is confident that there is a demand for an affordable adventure motorcycle in the U.S., as well as in the quality standards Zongshen implements when producing this model.
November – Shineray’s acquisition of SWM and Husqvarna facilities

The announcement was made at this November’s EICMA motorcycle exhibition by Shineray. The Chongqing based motorcycle manufacturer purchased SWM’s brand and production facilities earlier in the year. Shineray has also purchased facilities run by Huskqvarna, gaining products and technology to power the resurgence of SWM in Europe, produced in Italy. Shineray are well-known in china for their focus on off-road models, and the plan to carry this focus through with their SWM product range, stating that they intend to enter SWM models in the 2016 European Motocross Championship. Shineray plan to produce and market their higher-end SWM brand in Europe, while continuing to produce and upgrade their more affordable current models from their Chongqing, China facilities.

2014 saw some interesting developments in the Chinese motorcycle industry. Some new designs have been in the pipeline for some time, and also some companies laying the groundwork for future models by buying up high-tech equipment and expertise. Some manufacturers also showed progress on the track, notably Zongshen and CFMoto. 2014 also squeezed the smaller motorcycle companies, leading to some closures of assembly lines and manufacturers. While this November’s production and sales numbers were the highest in any month during this year (at 1,866,500 and 1,829,700 respectively), these numbers were still down by almost 6% year-on-year, and total export numbers were down by 3.9%, year-on-year showing us that 2015 will likely be another hard year for many Chinese motorcycle manufacturers.