November 23, 2022
Posted by: chinamotor
No Comments

What kind of scenery is worthy of a long way of hardships; What is the ultimate scene is worthy of this challenge. If there had to be an answer, I would say the scenery along the Sichuan-Tibet North-South route along the G317 and G318 national highways.

In the summer of 2022, temperatures in Chongqing soared above 40°, a record high. In this temperature unfriendly to travel, I traveled to the western plateau to escape the summer heat, the “baking test”. The original plan of this trip is to arrive at Lhasa all the way west from G317, then send the motorcycle back to Chongqing by logistics, and i will take the train back to Chongqing, enjoying the beauty of the Tibetan Plateau. However, due to the pandemic, the route was changed to the western Sichuan route. Fortunately, during this journey, we passed through the “Southern Genie Route”, which is rarely visited by tourists. In western Sichuan, we enjoyed the mountain scenery similar to New Zealand.

There are six of us on this trip, two Cyclone RG3, two Cyclone RT3, my Cyclone RX3S, and a KTM 390 ADV. On the first day, we arrived in Mianyang, Sichuan from Chongqing, bypassing Chengdu because of the pandemic. It is about 330 kilometers from Chongqing to Mianyang, almost along the N0.319 National Highway. The smooth road all the way made our journey a lot easier. My Cyclone RX3S had a 400ml displacement, easy to run on this kind of mountain road in the mainland, and the cruising speed of 80/90km/h was relaxing.

The next day’s trip was from Mianyang to Malkang, covering about 380 kilometers. From this day on, we formally step onto the No. 317 National Road, one of the main goals of this trip–riding into Tibet through G317 . After leaving Mianyang, we navigated Maoxian county, a section of the national highway built between winding, low river valleys.

When we arrived in Wenchuan county, we turned right onto G317, when we officially set foot on our trip to the destination. Instead of thick vegetation, there are bare hills and bits and pieces of roadside vegetation. 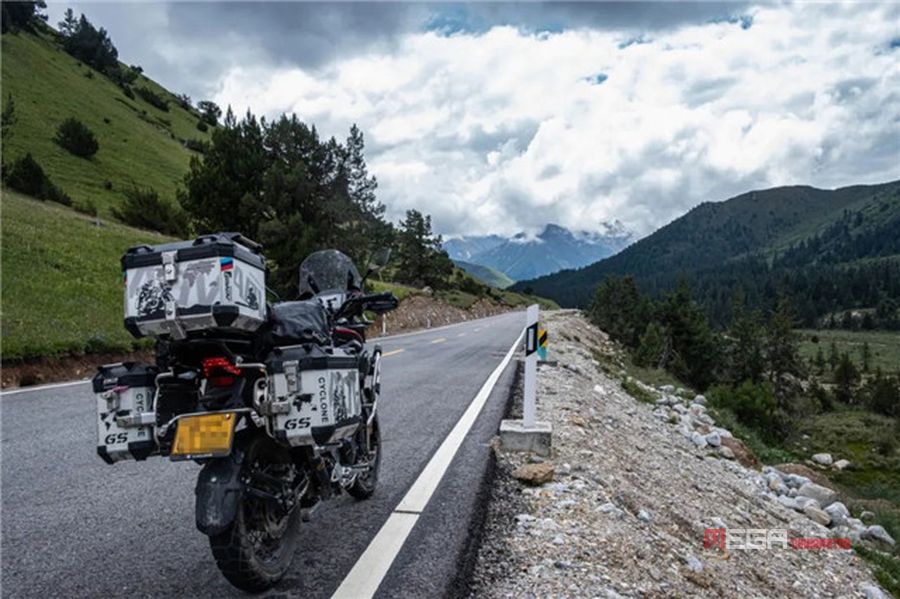 The G317 section from Wenchuan to Li County meanders along the river valley, but fortunately the road condition is good. We maintained 90km/h cruising speed the whole journey, my 400ml RX3S has an easy run, while the accompanying Cycle RT3 was more comfortable. A big scooter road cruising is always a joy.

As we approached Miyalo, the road began to rise and the altitude increases, and the vegetation on both sides began to take on the characteristics of the high-altitude region. Coniferous forests appeared and green meadows stretched out into the distance.

When arriving at the entrance of the Miyaluo scenic area, we stopped for a short time, then moved on. From here, the city of Barkam is less than 100 kilometers away. Instead of making it to the city, we camped in a village 30 kilometers away, about 3,000 meters above sea level, in a village courtyard overlooking the mountains. Leaving Barkam, G317 began to narrow–the two-lane road and the winding river valley limited our speed to 80km/h. A few dozen kilometers out of the city, the road finally widened and we started running.

After leaving Luhuo county, the landscape changed again, from coniferous forest and scrub to a single meadow. Apart from a few trees along the road and along the river valley, there were few tall plants. Due to the good road condition, we kept the speed at 80-90km/h. My RX3S still handled the road easily. The two RT3 can kept up at the same speed, demonstrating Cyclone’s advantage in long-distance and plateau riding.

Two hours after leaving Luhuo county, we began to climb again. Different from the previous climb from more than 1,000 meters to more than 3,000 meters, this time we continued to climb at an altitude of 3,000 meters. That was more of a power challenge. The Cyclone RX3S could easily maintain more than 80km/h, while the two RT3s did not perform as well, and 80km/h was their limit due to their displacement and transmission systems. However, this speed is good enough for climbing at an altitude of 3,000 meters. 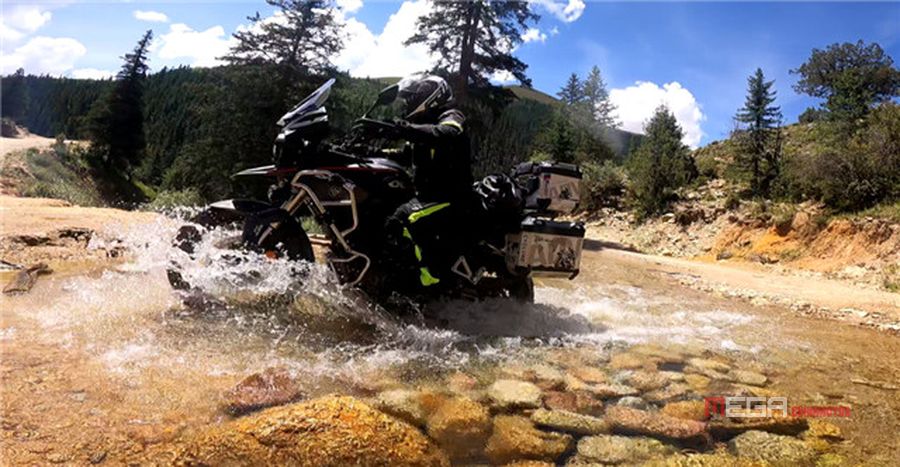 After leaving Kasa Lake, we began to climb up the mountain. The power loss of my 400ml Cyclone was not large when climbing at an altitude of more than 3,000 meters, still over 80km/h. We stopped at an observation deck on the mountainside. From there we saw the lake in the middle of cols, like a child embraced by the mountains. The water was blue, and the mountains in the distance stretched into the distance. I was very glad that I set foot on this place for the second time.

Eventually the team split into two. The camping group of three stayed on the hillside next to Kasa Lake, while the rest of us preferring hotel moved on. Our next stop was to arrive at Jiangda county in Tibet from Garze and officially stepped into Tibet to start the exciting part of this trip. However, due to the pandemic, we failed to do so.

After a round trip into Tibet and back into Sichuan, we eventually abandoned our plan to go to Lhasa and rerouted to western Sichuan. On the sixth day, we would start the most exciting part of our journey to the west, the “Southern Genie Route” journey.

After leaving Batang County TOWN and driving along 318 National HIGHWAY for a few kilometers, we turned left and entered the mountain behind the county seat. From here, we officially entered the journey through the “Southern Line of Nie”.

Arriving on G318 again, i thought of the first time to Lhasa. At that time there was no epidemic and not so many uncertainties for going into Tibet. The road from Batang to Bomi township had been completely hardened, but was still rarely visited.

Along the bare mountain wall, we ran excitedly. Although the trip to Lhasa did not succeed, halfway to the “Southern Genie Route” was also a great joy. When we had advanced about 30 kilometers, we began to climb again, and the bare walls of the mountain began to be covered with low bushes, which, I knew, was a sign of elevation. By that time, we were about 3,000 meters above sea level. After a dozen kilometers, we reached an altitude of more than 4,600 meters. The pass we arrived at was about 5000 meters above sea level. At this altitude, there was little large vegetation, only bare meadows and rocks. I thought the scenery would continue, but after going down the mountain we felt like entering the back garden of God. As the altitude dropped to about 3,000 meters, coniferous forests and verdant meadows appeared. This road section was the most beautiful section of the “Southern Genie Route”.

a few miles in the valley, we stopped at the roadside, all teammates gathered. There we saw more beautiful scenery in blending of meadow, streams, coniferous forest, and mountains, feeling as if we were in the beautiful Xinjiang.

After overnight rest, we continued our journey the next day, leaving the “Southern Genie Route Line” as planned.

With the sun behind us, we rode along Gemu village towards Bomi. Tall coniferous forests and meadows began to appear. The distance we had seen at Gemu the day before was then under our feet, reminding me of the scene when passing Bomi on my first trip to Tibet, a unique feeling of scenery of lower reaches of the Changjiang River in Tibet. When we arrived at the foot of the Eye of Genie, the road became unpaved again. After several kilometers of unpaved road, we finally arrived at the Eye of Genie. 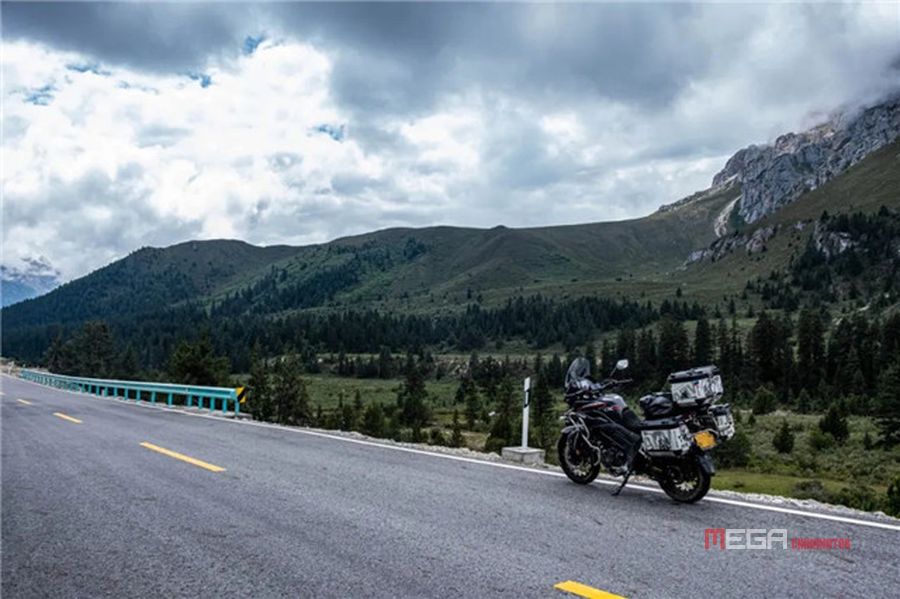 After leaving the Eye of Genie, there was a dozen kilometers of unpaved roads. After leaving this section, we had lunch in the town ahead. During lunch, RG3 and RT3 riders decided the trip to Daocheng Yading in Yunnan province, while KTM rider and I kept the original plan and returned to Ya’an via Litang along G318, and finally to Chongqing. On the eighth day, KTM rider and I officially left Hongyong town at around 10 a.m., stayed at the top of Mt. Kazila for two hours, and arrived in Xinduqiao town at around 6 p.m.

On the ninth day, KTM rider and I set out from Xinduqiao and went down the Zhedu Mountain after nearly an hour in heavy traffic jam. Finally, we arrived in Ya’an at around 5 p.m. On the tenth day, we set out at 9 in the morning and returned to Chongqing after nearly 8 hours/500 kilometers of riding, ending the 10-day tour of the western Sichuan route.