Motorcycles Are Being Incorporated into the Urban Comprehensive Emergency Security System

Recently, mountain fires broke out one after another in Banan and Beibei in Chongqing because of the continuous high temperature and drought. The firemen, policemen and medical staff rushed to the sites quickly, but the rescue work was difficult because of the dense forests. In terms of multiple mountain fires, it was difficult to continuously supply drinking water and food and firemen.

The motorcyclists played an important role in the fire. The fire extinguishers, bottled water and food were transported to the front line by them.

During this fire, the rescue operation organized by the people of Chongqing was supported. However, it is necessary for related associations and rescue agencies to think how to carry out the rescue in order, how to popularize the rescue education and training, how to avoid secondary damage in emergency rescue and how to make motorcycles an essential rescue force for each local emergency support system when seeing the tired motorcyclist felling over on site.

“According to the online news, the spontaneously organized rescue mass on the scene are very enthusiastic and have made significant contributions to the firefighting. Motorcycles, especially off-road motorcycles, have the natural advantages of strong passability and flexibility, and are also very suitable for this kind of mountain fires rescue. Motorcycles are often used as rescue vehicles in our event protection. I am also a motorcyclist. However, due to the terrible road conditions and the high temperature of over 40 degrees, it could be seen some riders and volunteers occasionally fell off the motorcycles. According to my experience of rescue work for many years, the rescue principle is to minimize the risk of the rescue itself. In the report, some riders didn’t  wear helmets and protective gear in face of the risk. The road temperature is very high, and the congestion of fuel vehicles on the road also caused a certain degree of danger. Whether it is a volunteer volunteer or a rescue team of the government, the core is to carry out the rescue on the premise of ensuring our own safety”,Mr. Li said.

He said,“It is hoped that professional off-road motorcycle training institutions or practitioners can also participate in public welfare undertakings such as emergency rescue, so that more motorcycle volunteers can receive more professional riding training and participate in public welfare emergency rescue more effectively. Importantly, some off-road vehicles and ATV/UTV vehicles cannot obtain license plates, which means vehicles cannot be insured have certain legal risks. In addition to riding training, the professional rescue force requires professional rescue knowledge courses for motorcyclists such as the “emergency rescuer” training of the Ministry of Human Resources and Social Security, the training of “Forest Firefighter” for the mountain fires, as well as the training of field first aid skills. As a disaster-prone area, it is necessary to cultivate the non-governmental standing emergency rescue forces to be trained and reserved frequently. It is expected that all the riders, people and volunteers involved in the Chongqing mountain fire rescue are safe and they will minimize the risk of rescue. Their heroic actions have moved us. ”

On August 24th, the mountain fire in Chongqing has been partially controlled. Due to the good performance of motorcycles in disasters, people reconsider if it is necessary to incorporate the non-road vehicles into the urban comprehensive emergency security system, which includes ADV, off-road motorcycles, ATV/UTV and so on. Whether it is in the Wenchuan earthquake or the Zhengzhou flood, the off-road motorcycle is the first choice because of the small size, low fuel consumption and long cruise mileage.

Emergency response is that emergency actions taken by relevant organizations or personnel after the accident occurs. Emergency rescue is that rescue measures are taken to minimize the loss or harm caused by the accident. Recovery is that actions are taken to restore the production, work, living and ecological environment to a normal state as soon as possible after the accident is initially controlled. In the implementation of emergency rescue for major disasters, it is obvious that the  fast response is the most basic requirement of the rescue team, and the rescue equipment must be flexible, convenient and durable. Precisely, the non-road motorcycle fully meets these requirements. First, it has high mobility and strong passability in mountainous areas. Second, motorcyclists can take the lead in carrying out first aid and firefighting activities before fire trucks and ambulances arrive on highways. Third, motorcyclists can quickly go to the front line for information collection and guidance in a flood. In addition, motorcyclists can  quickly investigate the conditions of streets and bridges, and transmit information and carry out rescue work in the earthquake.

Zhang said,“In recent years, it can be seen that motorcycles have played an important role in emergency rescue for natural disasters such as Wenchuan earthquake and China Eastern Airlines accident. Many motorcyclists voluntarily arrived at the rescue sites. In this Chongqing mountain fire, there were still some motorcyclists voluntarily organized in the firefighting scene, which presents the mass foundation of Chongqing motorcycles, the responsibility of motorcyclists, and the important role of the motorcycles in mountains with the complex landform. However, there is the urgent need of the emergency rescue professional training, which is not only a problem to solve for the local emergency rescue department, but also one of the key tasks to be done by the chamber of commerce. CCCM will visit the National Emergency Management Department as soon as possible to discuss the feasibility of incorporating motorcycle equipment into the national emergency rescue management system. In addition, CCCM will get in touch with major domestic rescue organizations such as Blue Sky Rescue and emergency rescue associations in various places to give full play to the special role of motorization in complex landforms and rapid rescue. What’s more, CCCM will cooperate with professional emergency rescue training institutions to make motorcycle rescue more scientific and sustainable. Motorcycles are not only an important livelihood tool, but will also play an important social value in the future.”

“MLIY Kuqa World” reported that Tokyo International Fire and Safety Prevention Exhibition 2023 was held in Japan. What were shown mostly are large special equipment such as fire trucks and helicopters. The red fire-fighting motorcycles displayed in the Yamaha exhibition area are equipped with a variety of special rescue equipment. The design concept is to make use of the mobility and convenience of motorcycles, which makes up for the lack of mobility of fire fighting equipment  and rescue equipment in emergencies, and further improves the rescue efficiency of the fire department.

The special equipment for emergency is put in the right side-case such as pyrotechnic signal rods, and the left side of the two fire motorcycles are respectively equipped with the hydraulic jacks and the hydraulic cutters to cut through the deformed car body.

The rear of the vehicle is equipped with the personal portable fire-extinguisher  compressing air to spray water for about 20 seconds . It is about 20 kilograms to easily deal with the small fire.

In addition, major motorcycle manufacturers have provided multi-purpose urban police motorcycles and fire motorcycles most of which are used in urban streets and cannot play a role in complex mountainous areas. The expansion equipment need be improved and motorcycles are seldom applied by the major emergency rescue teams in the country.

It has only been one year since the disaster of the Yellow River Soil Forest Marathon. The epidemics and natural disasters outbreak continuously. Therefore, it is time to develop the professional motorcycle equipment and carry out the scientific training for motorcycle rescue. 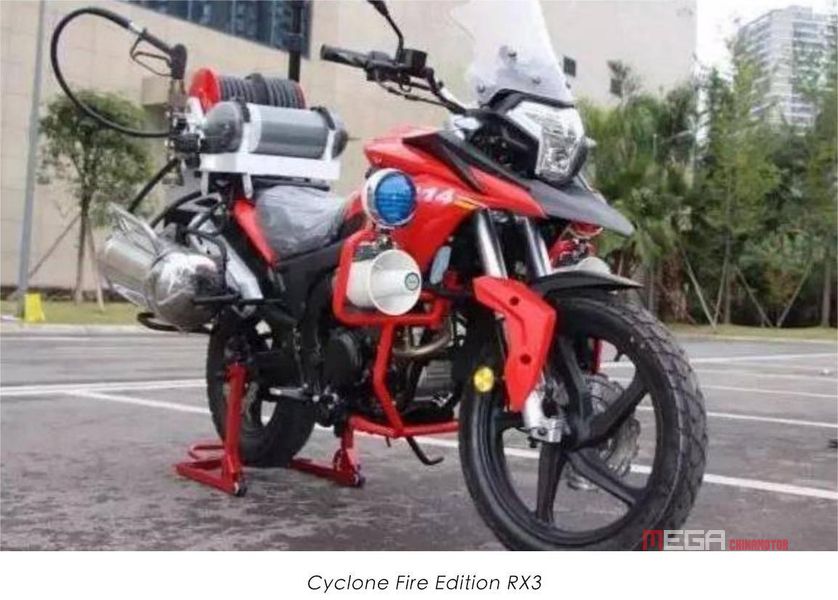