Over 17 Million Chinese Motorcycles Produced And Sold In 2020

In 2020, due to the impact of the epidemic, the world economy suffered a severe recession, the circulation of the industrial and supply chains was disrupted, international trade and investment shrank, the commodity market was in turmoil, and domestic consumption, investment and export declined. In February, the production and sales of China’s motorcycle industry declined by more than 70% year on year, and more than half of the enterprises ceased production.

With the strong support of national policies and unified deployment, the upstream and downstream enterprises of the whole industry made joint efforts. Driven by internal and external demands, the motorcycle industry was among the first to recover from the impact of the epidemic. In 2020, the production and sales of Chinese motorcycles exceeded 17 million, down by about 1% year on year. Domestic sales reached about 10 million, down by only 0.32% compared with last year.

Due to the precise and effective prevention and control of the epidemic, the central and local governments issued a series of relief policies to promote the resumption of work and production. Since March, the domestic market of China’s motorcycle industry began to recover at an accelerated pace. From January to April, the sales volume was basically flat with that of the same period the year before. But in the same period, due to the outbreak in overseas markets, exports fell sharply, dragging down the overall recovery of the industry. Since the second half of the year, with the improvement of overseas markets, the industry began to recover comprehensively. During the peak season, about 3.4 million motorcycles were sold, an increase of 10.29% year-on-year, which accelerated the progress of industry recovery.

The large displacement recreational motorcycle market has seen rapid development since 2013. After 8 years, consumer groups gradually scaled up, which has driven the development of the peripheral industries, such as motorcycle touring, clothing & gear, and modification parts.

From the perspective of total motorcycles in Chinese market, large-displacement motorcycles only accounts for about 3%, indicating a huge growth potential. With the continuous increase of residents’ income and the expansion of middle and highe income groups, it is expected that large-displacement motorcycles will account for 10% of the total motorcycle market in China in the future. In 2020, the production and sales of small and medium displacement two-wheeled motorcycles (displacement≤250cc) in China was about 12.3474 million, down 5.87% year on year; domestic sales reached 5.7542 million units, down 10.51% year on year. Electric motorcycles are mainly sold in the domestic market, with a small amount of exports. In 2020, the sales of electric motorcycles reached 2,295,400 units, with a year-on-year growth of 20.91%.

In 2020, among the top 10 enterprises in production and sales, 2 enterprises saw increase and 8 saw decrease; 8 of the top 20 enterprises saw year-on-year growth, while 12 saw a decline. The decline was mainly due to the epidemic. The competition in the domestic and overseas markets of small and medium displacement motorcycles becomes more intense. 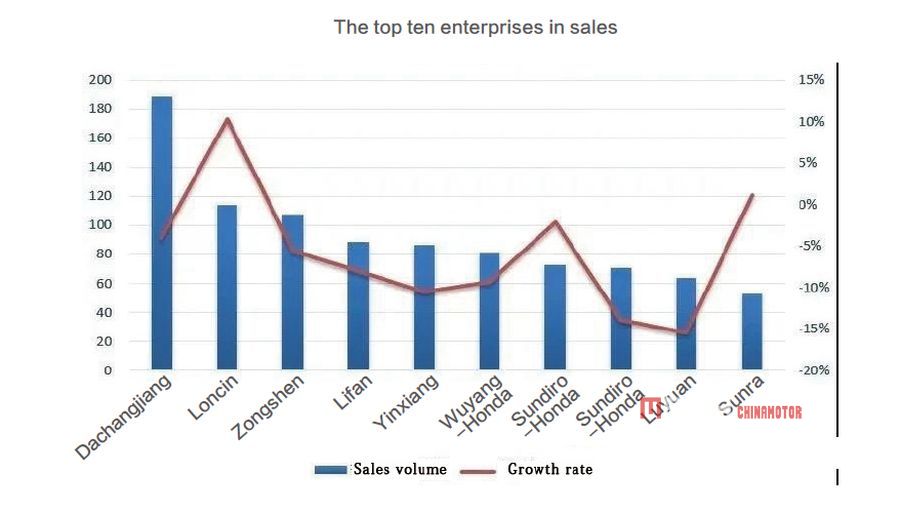 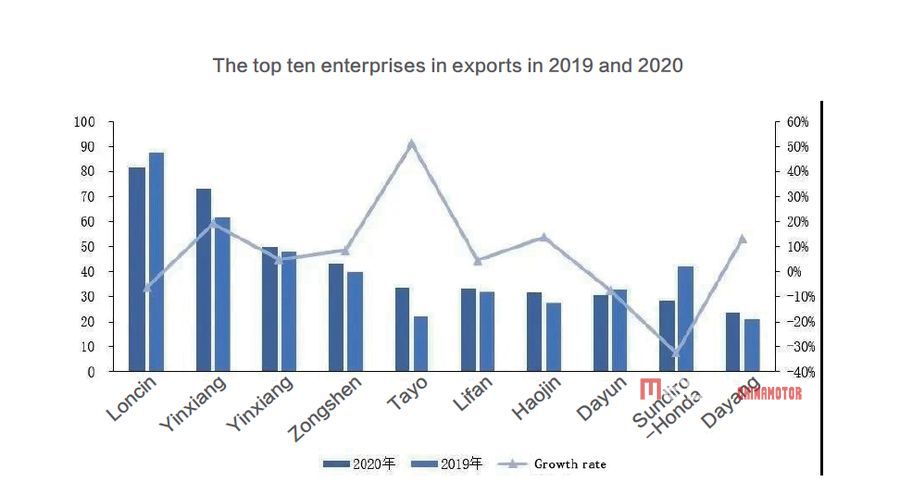