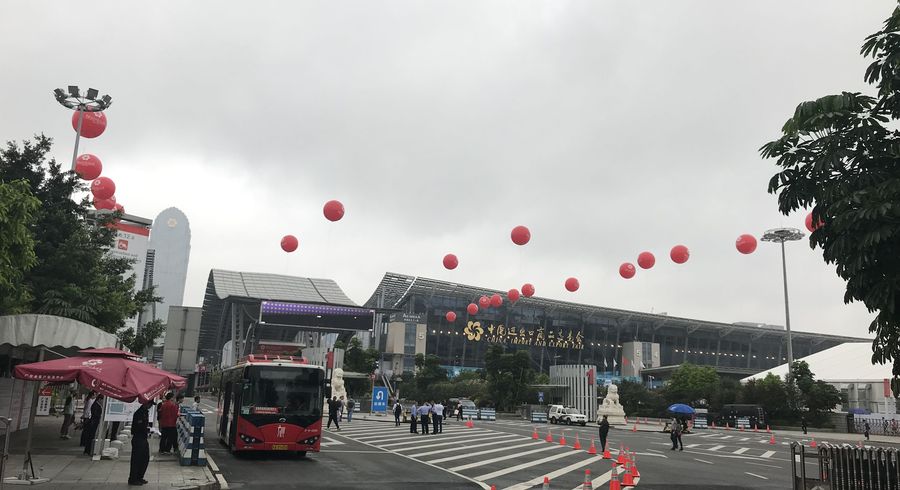 February 23, 2020
Posted by: chinamotor
No Comments

The first session of the 125th Canton Fair ended on April 19. According to the official statistics of the Canton Fair, about 190,000 people attended the fair, but the number of participants decreased compared with that of last year. According to the spokesman of this exhibition, the main cause for the declined number of purchasers is the sluggish global economy apart from the fact that this spring edition Canton Fair was held during an important national holiday. It also indicated the weak overall foreign trade of China. Thus, it is a time when pressure and opportunities coexist on the development road of motorcycle enterprises.

Although the motorcycle export is facing severe foreign trade pressure, the domestic major motorcycle enterprises still attach great importance to this Canton fair, with high specifications and full preparation to display to the global buyers Chinese motorcycle brands and images.

DY125-68M has a different design style from other cubs in overall appearance, which shows a sharp modeling and an extremely sporty style. The front face presents a “V” shape. The eagle eye turn signals on both sides of the front panel and the front shield of the two-color handlebar are featured with sports elements. DY125-68M is equipped with a new EPI125 multi-clutch engine independently developed by DAYANG. With optimized air distribution phase and combustion chamber, the fuel consumption can be reduced by 20% compared with the carburetor models of the same displacement. At the same time, at the economic cruising speed from 40km/h to 70km/h, its vibration suppression is excellent, quiet and with strong acceleration. As a practical cub, DY125-68M has a sporty appearance and reliable power, making it a sports cub with outstanding comprehensive performance. 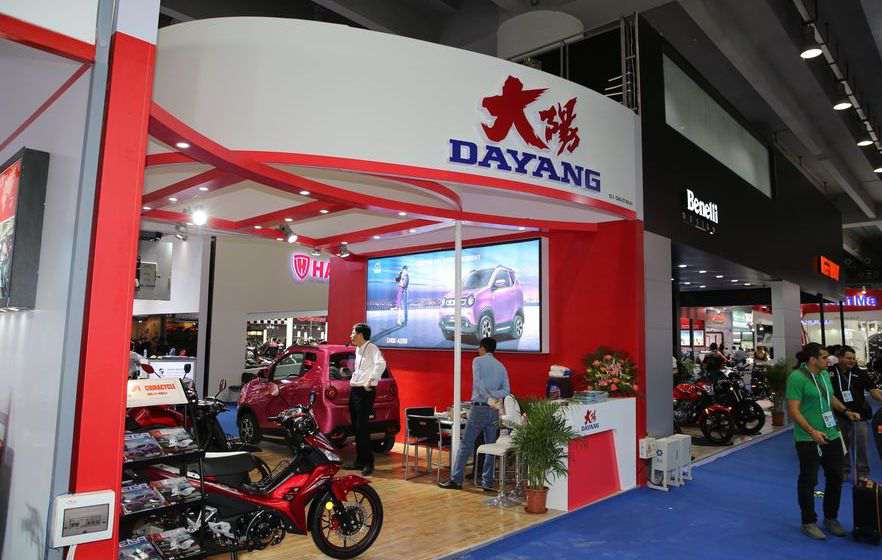 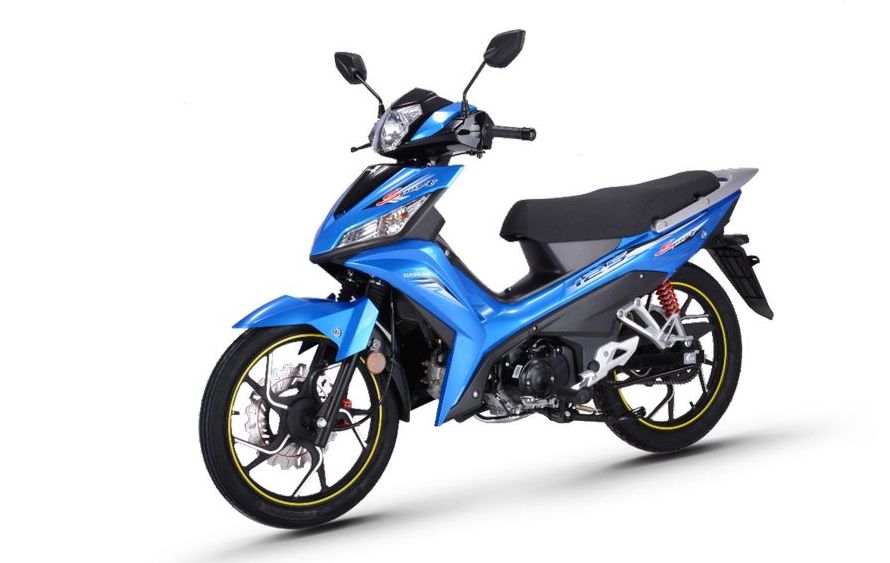 The number of new export models exhibited by ZONGSHEN this time hit an all-time record. The three major brands, CYCLONE, CINECO and ZONGSHEN displayed a total of over 10 new models. 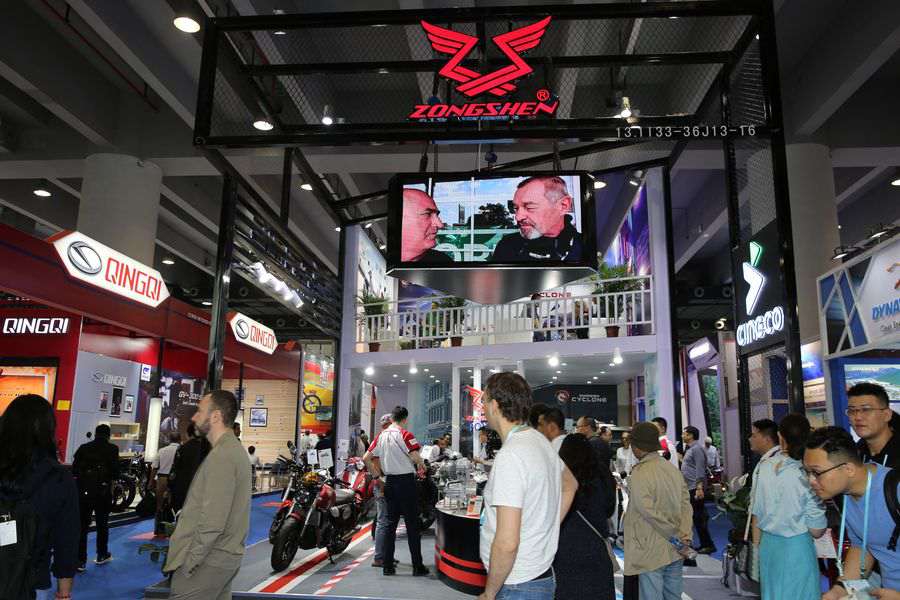 As a representative one in the domestic ADVs, RX3S is equipped with a 378mL water-cooled SOHC 8-valve asynchronous twin, with a compression ratio 10:1. It has a Delphi EFI system, with a maximum power of 27kW/9000rpm and a maximum torque of 35N·m/6500rpm. It is the first of CYCLONE series that adopts a steel tube frame to reduce a lot of weight. With three aluminum tail boxes, the bike’s curb weight is 200kg. RX3S’s front brake adopts double floating disc and dual radial four-piston caliper, the rear brake is a single piston caliper. The ABS system is supplied by SAFE BRAKES.

Prior to the RE3, CYCLONE family does not have a retro model. RE3 has a silver-gray body, a long stainless steel exhaust, and a striated tank, but it is definitely a super elegant retro bike. RE3 carries a ZONGSHEN’s TC380 water-cooled eight-valve DOHC two-cylinder engine which is the same power plant as RX3S.

RZ3S is an innovative retro street bike that is highly recognizable. The round headlight has 5 lenses, simple and stylish; the black fan-shaped windscreen distinguishes the bike; the angular high-back fuel tank together with the integrated seat cushion makes the bike look aggressive; the red woven frame gives a compact and sporty look. 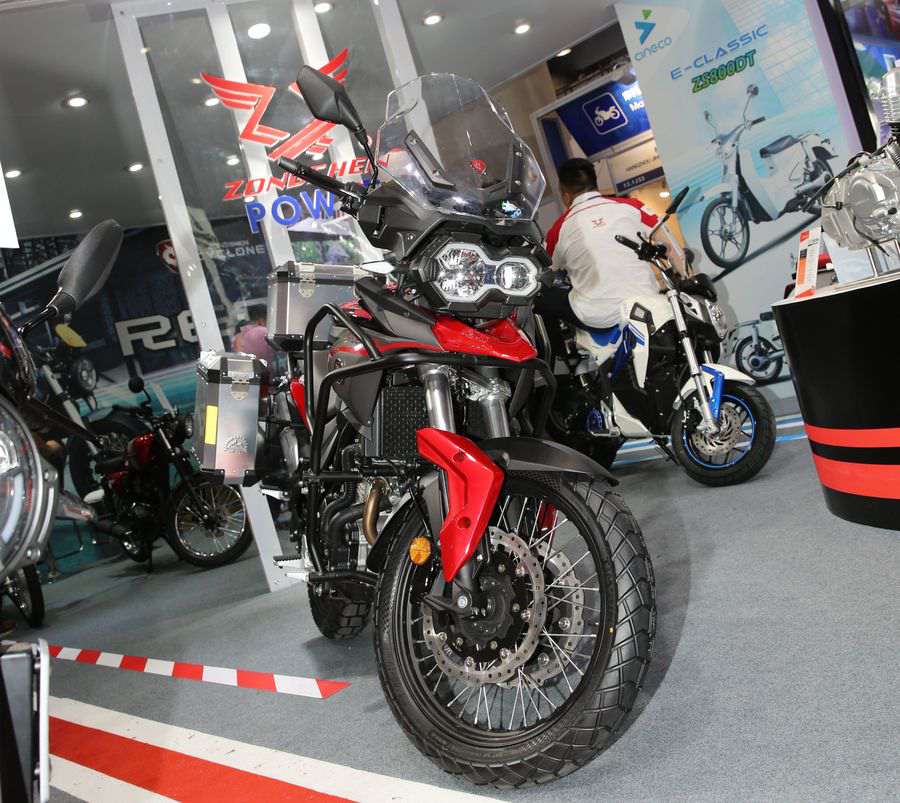 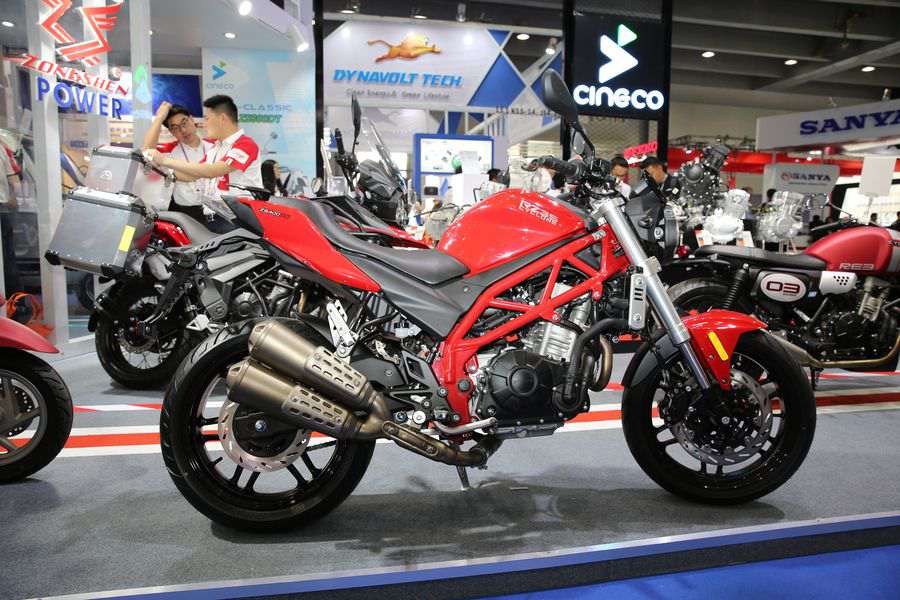 LONCIN 300AC does have some unique features in its appearance, such as the distribution of the headlight, the shape of the meter, and the overall body shape. Although it is known as a retro bike, these details are different from traditional retro models. Moveability is the most impressive attribute of bike. It is hard to imagine that a retro bike could have a strong power performance. Both the braking performance and the power output is beyond moderation. With an engine having off-road genes, a rigid frame, and a properly adjusted shock absorption system, LONCIN 300AC turns out to be a retro model with gratifying moveability. Data shows that the 0-100km/h acceleration takes 8.2s, and the output is even better after 60km/h. 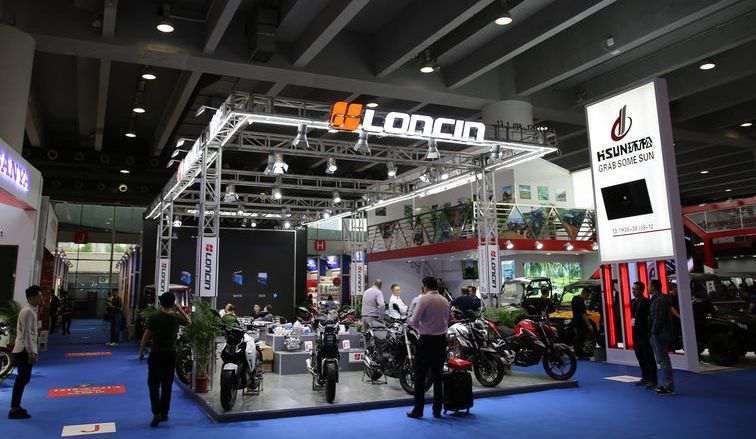 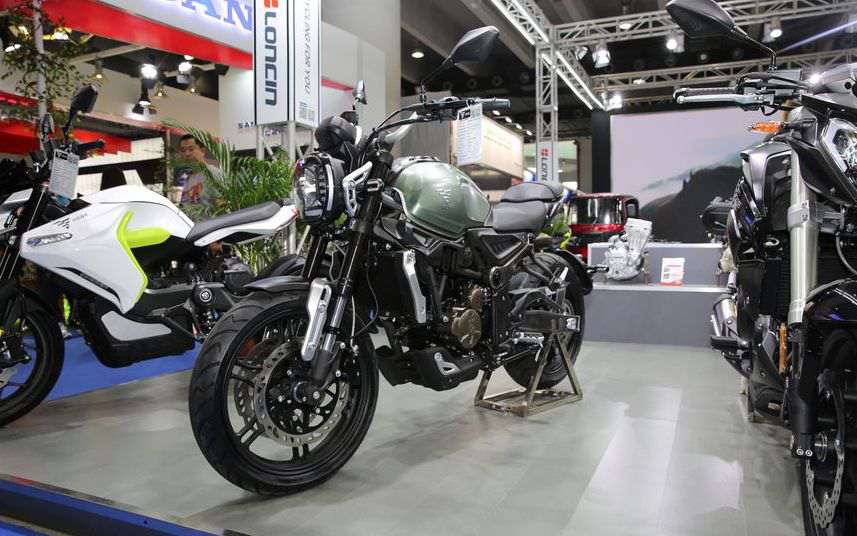 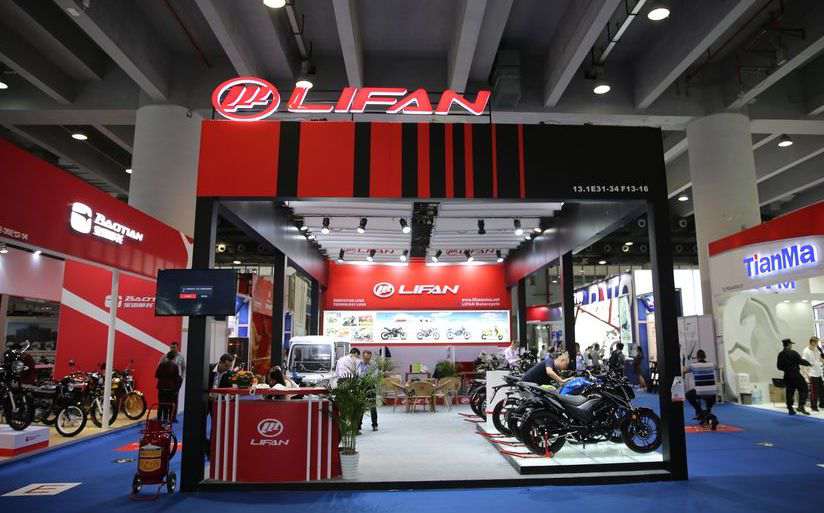 LIFAN’s KPT200 (a good riding companion), KP250 (a tough street model), and KPM200 (a retro model) attracted a lot of attention at the fair.

KPT200, as LIFAN’s first ADV model, is the first choice of motorcycle traveling. It features an impressive sharp beak modeling as well as fast acceleration.

KP250 is the first middle-large displacement model of KP series. KP250 carries the water cooled four-valve EFI engine: NRF250, which is developed by LIFAN and runs more smoothly, accelerates rapidly, and has a faster starting and overtaking acceleration.

KPM200 has fresh colors with the vintage appearance design so that featuring high recognition in Chinese retro bikes. All the lights on the bike are LED lights which add some color of technology in the retro style. KPM200 is equipped with a single-cylinder water-cooled 4-stroke engine which is as same as KPT200 and features the compression ratio of 11:1, the maximum power of 12.5kw/8000rpm and the peak torque of 16.5N·m/6500rpm. 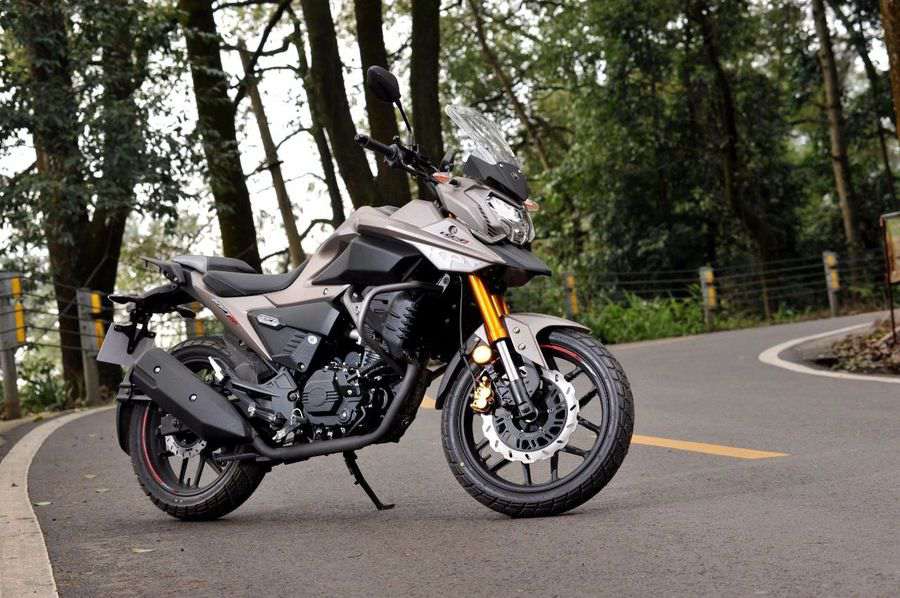 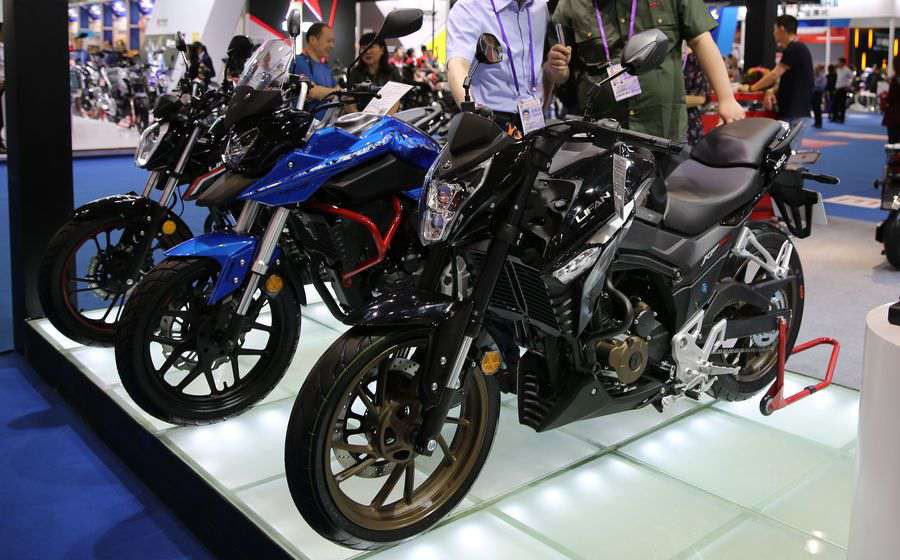 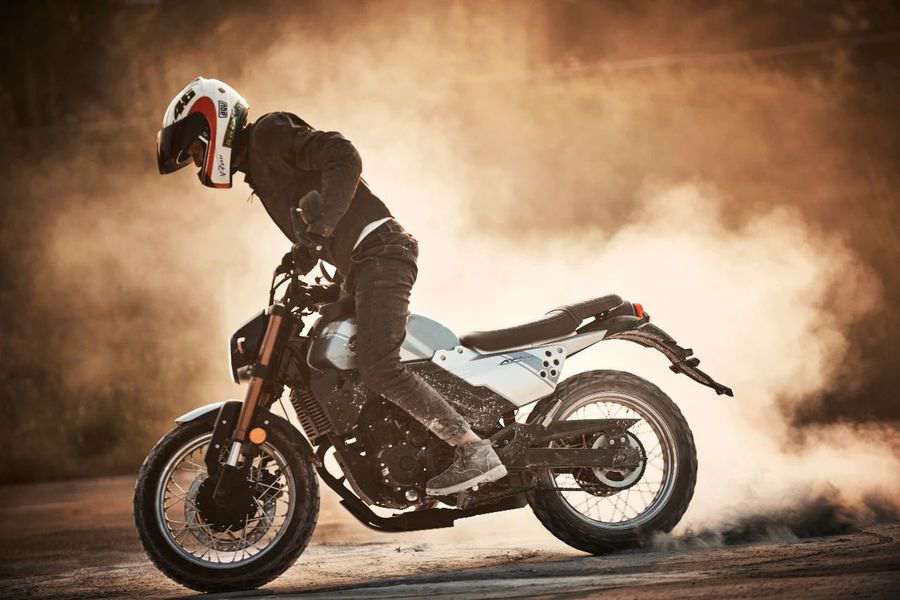 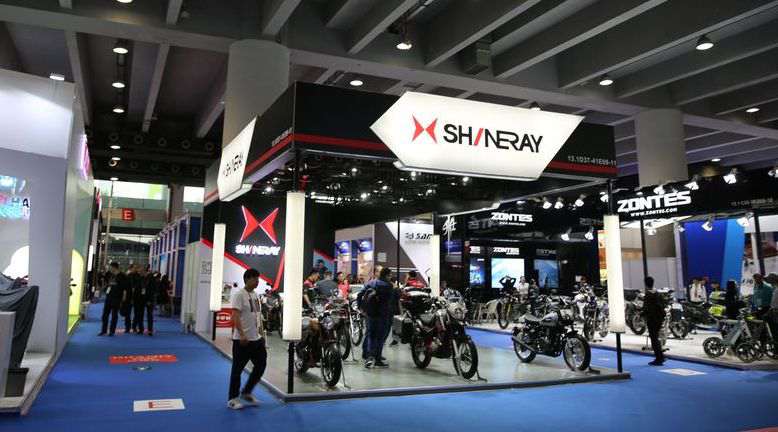 XY400GY-3 gives a strong “off-road” feeling as the first impression. With a thin body, exposed frame and angular fuel tank, XY400GY-3 does not have complex lines, and the “hard core” texture of the bike is showed through a clear shape. The engine is firmly fixed in the frame, while the compact transmission of the dry-sump engine allows a large ground clearance. XY400GY-3 carries a 400cc four-valve single cylinder engine. It is further optimized, with an actual displacement of 397cc and a unique RFVC combustion chamber structure, which generates a maximum torque of 32N·m at around 5000rpm (a maximum output of 28hp).

SHINERAY displayed the large single-cylinder motorcycle – XY650-A, which mainly targets at the north American and European markets. It is powered by an oil-cooled single cylinder EFI engine. The front and rear tires are matched with ABS to guarantee the safety performance. 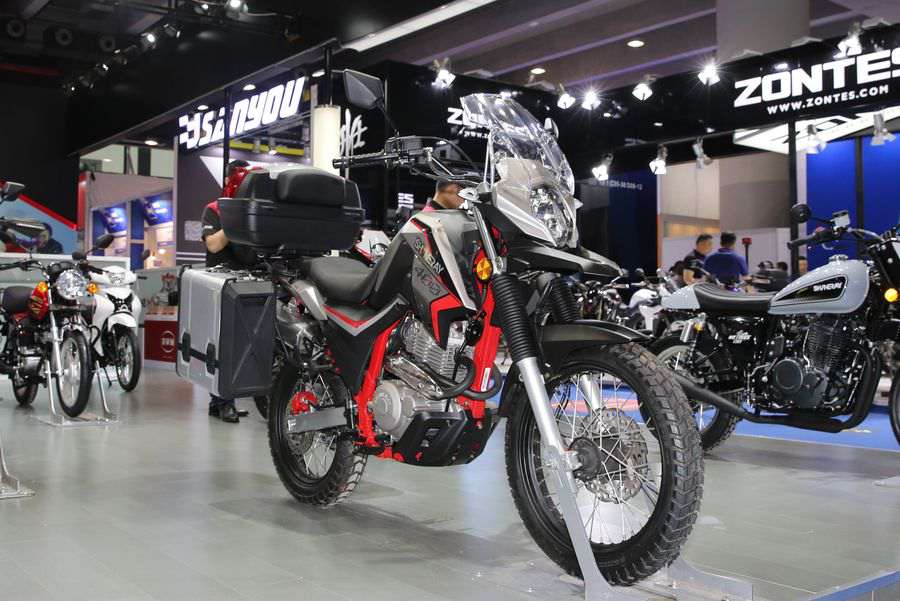 BS200GY-18K launched this time is a BASHAN independently developed model with brand new design, novel and fashionable appearance and a strong sense of sports. It carries a four-stroke, air-cooled engine with a balancing shaft. The maximum power is 10Kw/7500rpm and the maximum torque is 13.5N·m/6500rpm. It has front and back disc brakes, ensuring good braking performance. An inverted shock absorber is provided at the front, with a single shock absorber at the back. The designed top speed is 95km/h and fuel consumption is 2.9L/100km. 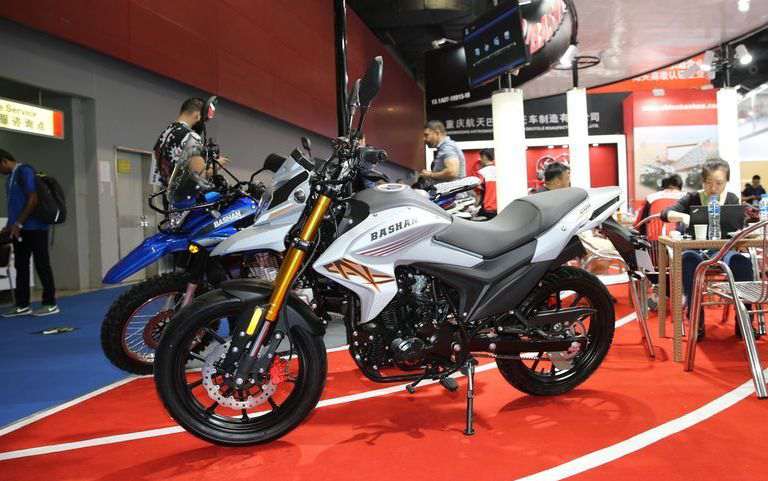 As an established enterprise of differentiated export models, XGJAO once again showed its strong R&D capability. XGJ250-3 and XGJ250-6C, which are equipped with self-developed water-cooled twin cylinder EFI engine, have attracted much attention of customers all over the world. Both the two motorcycles carry double-cylinder water-cooled four-stroke engine which is developed by the automotive power technology research institute of XGJAO Group with a huge investment. It supplies a gap in the field of domestic 250cc DOHC in-line double-cylinder high rev engine. It has met the product R&D demand of top power, top technology and highest level of appearance on the same level of bikes. HAWK is a brand-new off-road model specially developed by HAOJIN for the South American, the Middle East, and African markets. Since its launch, it has been widely recognized by customers. With an overall technological upgrading, now HAWK is powered by a new CBF200 engine with an electronic fuel injection system, bringing it more power and resulting in lower fuel consumption. HAWK also updates the front and rear double disc brakes and inverted front shock absorption. It has a sharp appearance, and the red and white body looks dynamic. 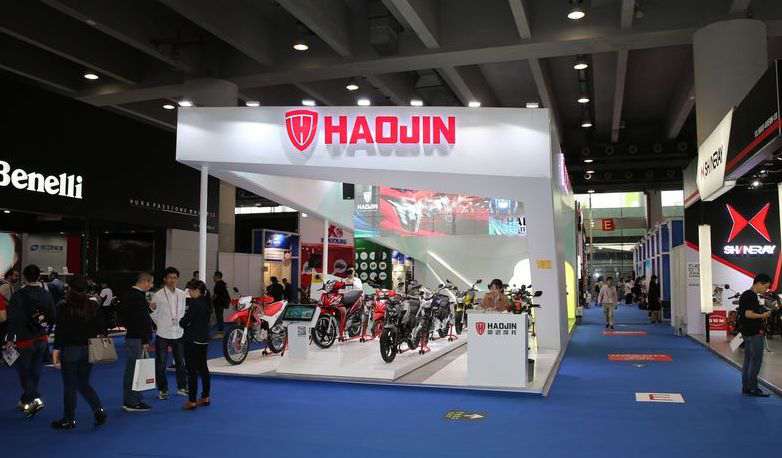 SK250-K was reported to have won the third of the Export Design Award in the 124th Canton Fair, as well as the second of the concept group and the first of the comprehensive group in the 9th Governor Cup Industrial Design Competition. 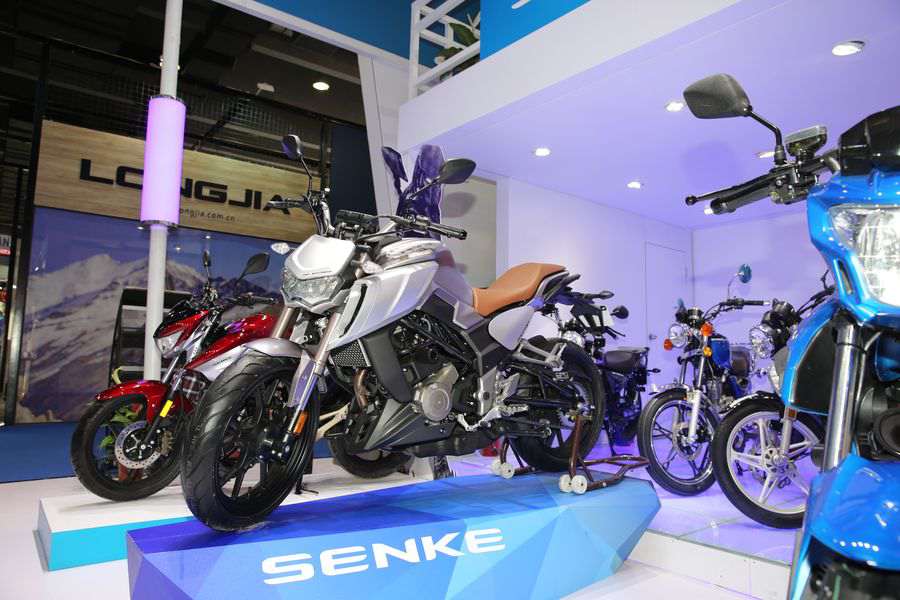 As a famous export brand, SANYA, after comprehensive market research in the early stage, brought several flagship products with targeted improvement and upgrading to the exhibition. 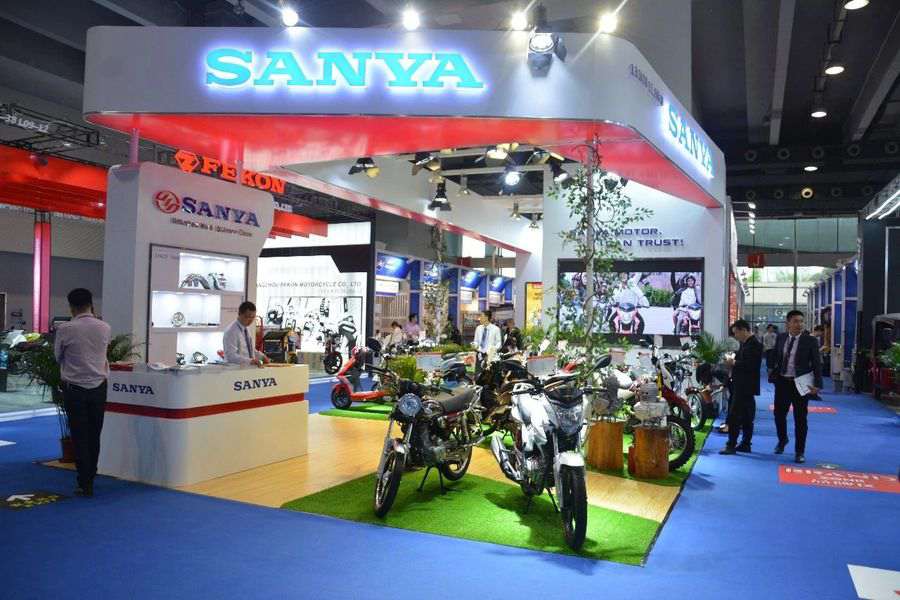 The upgraded music model UF190, SANYA’s flagship product, is upgraded from 150cc to 190cc, improving the disc brake system and optimizing the shock absorption structure. It carries the UFB engine independently developed by SANYA. The fuel consumption is less than 2.5L/100km.

NF125box, as an enhanced version of the classic CG model, is a main product of SANYA. The new NFB high efficiency power technology, which optimizes the cylinder head intake and exhaust system, reduces the engine’s fuel consumption by more than 5% and provides sufficient power. The appearance continues the classic CG style. There are more than 30 detail upgrades in the five major systems, increasing the durability and comfort exponentially.

SANYA’s off-road motorcycle, SY200GY, was one of the most consulted products by customers at the fair. It is the main export model of SANYA that has been certified by the European Union. According to the feedback from users of different countries, SANYA has made comprehensive improvement: increasing the distance between the tire and the head, using the lengthened and thickened shock absorber, and adopting the wear-resistant tires specially suitable for various mountain roads.

SANYA’s self-developed cub SY110-22 is known for fuel saving since its launch. It adopts new PC materials and has passed the EU E-MARK and CCC certification. SY110-22 appeared at the Canton Fair with a new color scheme and new decals, looking more fashionable and dynamic.