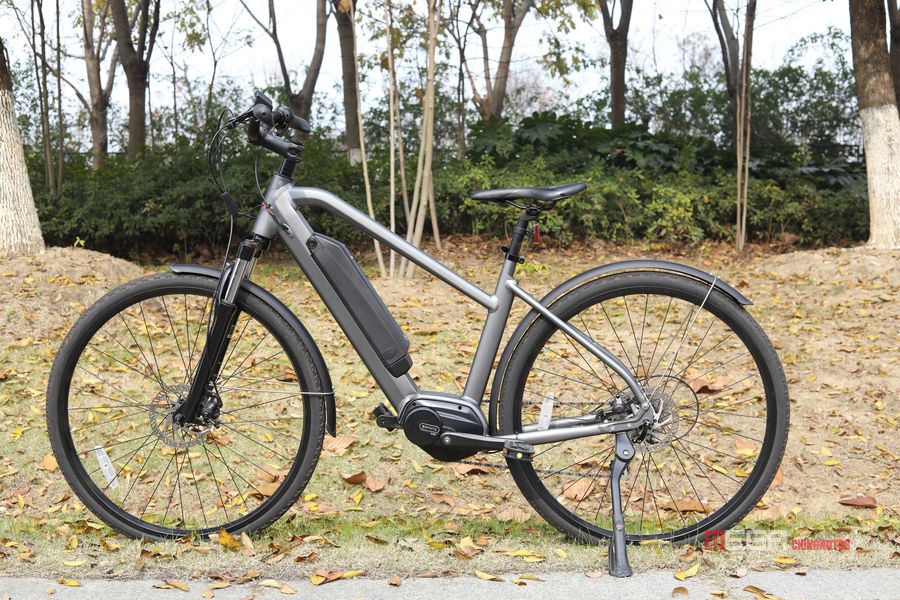 In 2021, China exported 22.9 million electric two-wheelers, up 27.7% year on year, with an export value of $5.29 billion, up 50.8% year on year. The year-on-year growth rate of the annual export of electric two-wheelers has a large monthly difference, with a monthly increase of more than 100% in the first half of the year. Due to the low base caused by the outbreak of the pandemic in the same period of 2020, the year-on-year growth rate of the first and second quarters of 2021 is large, especially in February when the year-on-year growth rate of the monthly export volume is as high as 638.5%, and the export value increased sharply by 589.4%. In the second half of the year, the growth rate of export value in the third and fourth quarters narrowed rapidly and gradually returned to normal growth. Due to difficult shipping congestion and unpredictable exchange rate trends, the monthly export volume has declined to varying degrees since August. 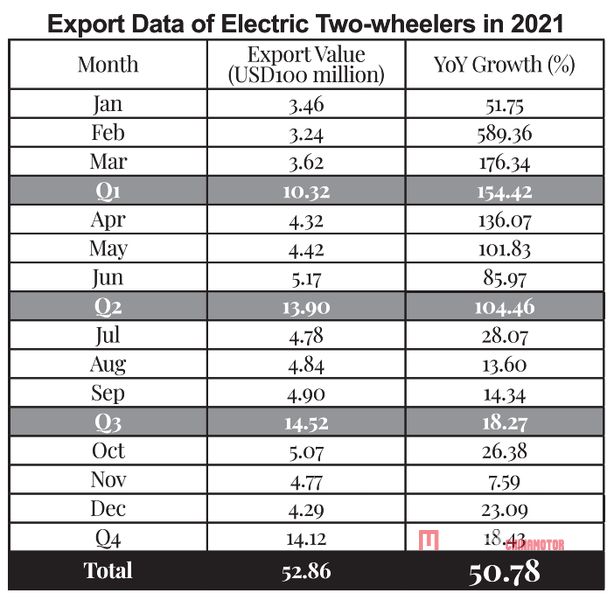 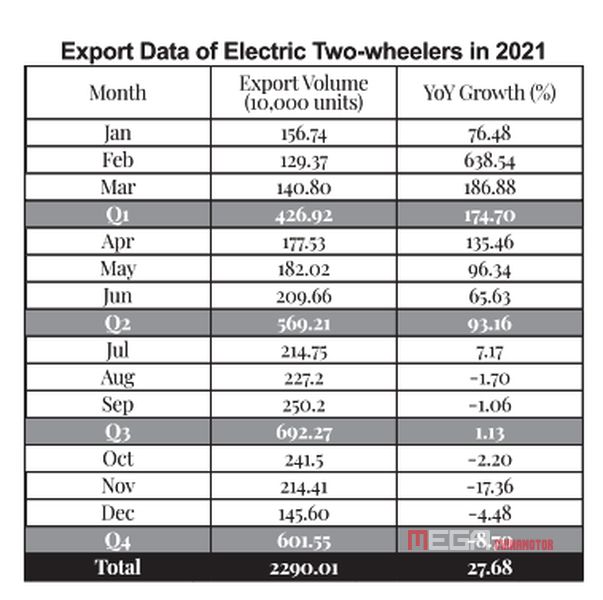 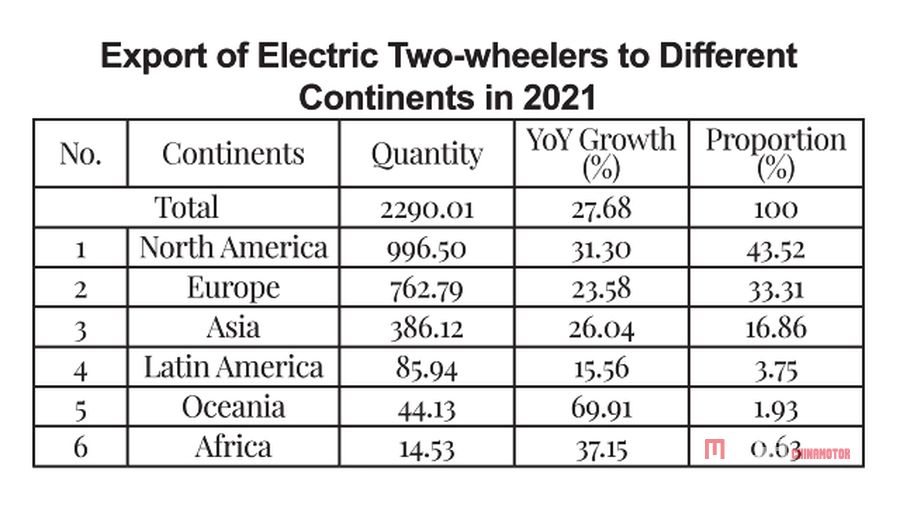 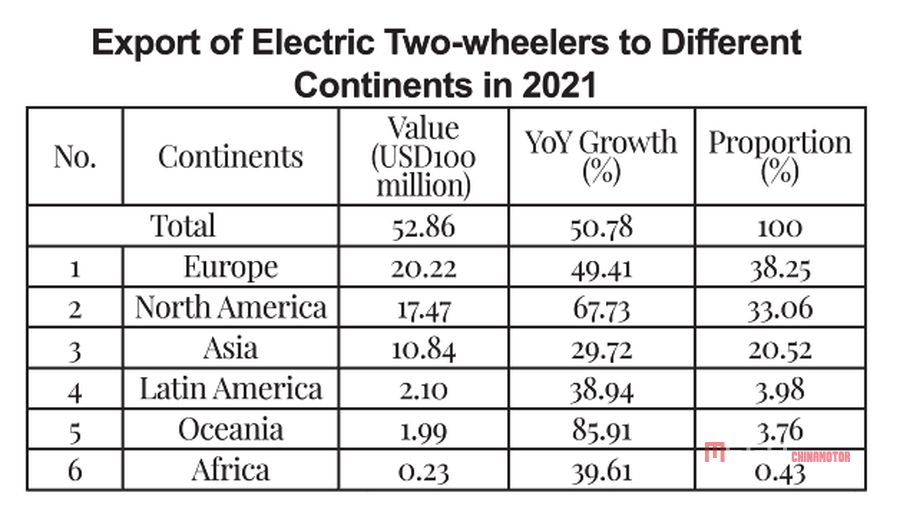 Among the top ten export destinations in terms of export value, the United States, the Netherlands and Canada are the top three destinations of Chinese electric two-wheelers. Specifically, the export value to the United States is the largest, reaching $ 1.52 billion, accounting for 28.7% of the total. Export to Canada showed a large increase, with total value of $230 million, up 131.1% year-on-year, accounting for 4.4%.

A number of domestic motorcycle companies proposed to set up new energy brands in 2020. Among them, CFMoto has officially released the AE8 in the beginning of 2022, and QJMOTOR Shanghai company was officially established at the end of 2021, anchoring a new direction for QJMOTOR’s development of new energy two-wheelers. In June 2020, BMW unveiled an electric concept called the Vision DC Roadster. In February 2022, Pierer Mobility announced in its financial report and investor documentation that KTM is developing a electric street bike, the first official confirmation of the existence of E-DUKE. The entry of international big brands makes the competition of electric motorcycle market increasingly fierce, and will accelerate the development of electric motorcycles.

Policy: Under the background of the “double carbon goals”, green mobility and environmental protection are the trends of the era. As one of the important means of short-distance travel, electric two-wheeled vehicles feature great convenience and high popularity, and it is an indispensable trend for them to go intelligent.

Shared platform: In recent years, shared bikes, electric bikes and scooters have become one of the preferred ways to connect the public transportation, and the first choice for short-range commuting and trips. With the popularity of shared two-wheeler platforms, the platforms need to make forecast of vehicles needed, and also control the operating and maintenance cost, which requires the vehicles to be more intelligent. Thus, manufacturers need to further customize and develop products to satisfy the demands of the platforms.

In December 2021, Yadea planned to acquire Narada Power’s two subsidiaries that develop, produce and sell two-wheeler batteries. Through this move, Yadea intends to expand to upstream core components to maintain its leading position in production and development of electric two-wheelers while steadily expanding its supply capacity by stabilizing the supply chain. During the same period, Yadea, together with five other investors including AISPEECH, invested in Shanghai Shensilicon Semiconductor Co., Ltd., aiming to promote more in-depth technical cooperation and product development and accelerate the integration of electric two-wheeler industry with artificial intelligence technology, to ultimately create full-scene intelligence systems and bring new experience of intelligent riding to more users. This shows that vehicle enterprises have begun to implement their strategic deployment to the upstream and downstream supply chain while consolidating their domestic and overseas market share, which is to further expand their market share through long-term strategies.

First, 2022 is the first year to implement the RCEP, and the tariff on China’s electric motorcycle exports to Indonesia will be reduced by 2%. It is expected that China’s electric motorcycle exports to Indonesia will have certain growth space in 2022. Second, the replacement demand brought by the new national standard is still expanding, the implementation of the new standard the cities continues to drive the replacement demand, and industry concentration will further improve. Third, the carbon peaking and neutrality goals will drive electric two-wheelers into a new stage of development. In a word, the total output of electric two-wheelers in 2022 will remain stable and rise, and the high-quality development of the industry will be further accelerated.