March 5, 2020
Posted by: chinamotor
No Comments Blue Shark Robor is equipped with a high-speed brushless permanent magnet motor with a peak power of 5,000W, which claims a maximum speed of 80km/h. It is worth mentioning that Robor adopts the power configuration of an ordinary scooter — the motor drives the rear wheels directly through the gearbox, which is an advantage that other hub motors cannot match. Based on this, Blue Shark Robor claims to have a 0-50km/h acceleration of 4.9s.

Robor carries two separate batteries with a total capacity of 2496Wh, which supports a cruising range of more than 160km (at a constant speed of 20km/h). It can reach a comprehensive cruising range of 80km in actual riding. According to official data, Robor has a load capability of 200kg.Robor’s seat cask can hold a half-face helmet besides the battery units. Charging speed is another big issue of electric two-wheelers. Robor is claimed that the battery can be charged to 80% in two hours and fully charged in three hours. In addition, Robor can be provided with a charging dock, which can be used for charging from the charging piles of electric cars. 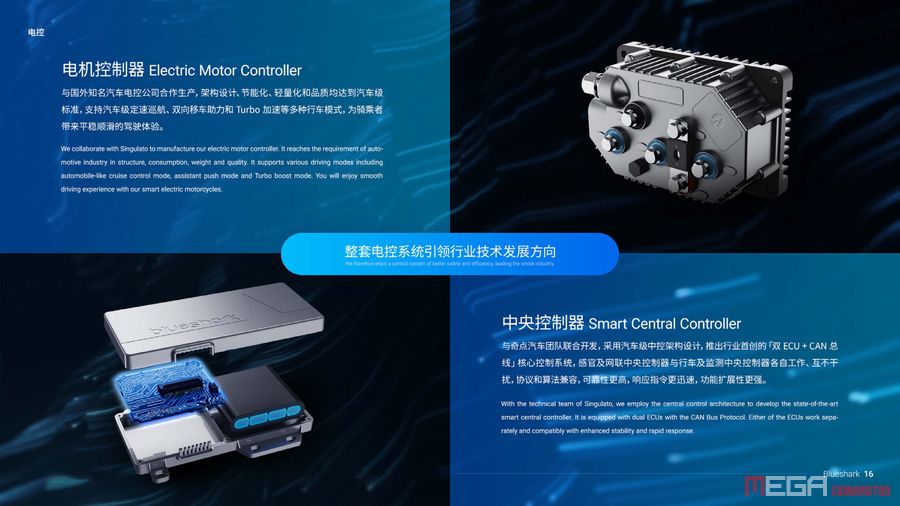 In addition, Blue Shark Robor has some other interesting features, such as automatic power cutoff in water and bidirectional mobile assistance, and even has a simulated engine sound that mimics a fuel motorcycle. Another high-end function Robor has is cushion sensing, which prevents the e-motorcycle from being started when no one is sitting on it. In fact, Robor is equipped with more than 73 sensors, providing comprehensive intelligent solutions, including ADAS intelligent riding assistance system, smart key, fingerprint activation, GPS positioning, etc.

In addition to launching the new brand and product, Blue Shark also carries out in-depth strategic cooperation with Benelli, the century-old motorcycle giant, to jointly build smart electric motorcycles for the global market. As a core partner of Blue Shark, Qianjiang motorcycle is directly responsible for the production of Robor. Qianjiang has a large, complete finished motorcycle production capacity, which, together with a number of other world-class motorcycle brand suppliers, constitutes the reliable supporting system for Blue Shark Robor. A Number of Authoritative Industry Data Has Been...
0
4917