Round the World on a Motorcycle

I know this sounds really crazy….. But people do this. People from all walks of life, and from countries all over the world. They have been taking these risky, long, tough, wild journeys since back in 1903 as far as I can track them.

Here are some amazing statistics that may surprise you. Most of this information is found on Wikipedia and Google. As I keep digging, I find more and more of these tough souls ready to risk life and limb for an adventure. From what countries do these travelers come from? Americans seem to be the most adventurous… and here are the numbers. 27 Americans, 7 British, 1 Australian, 1 Austrian, 1 Argentinean, 1 Canadian, 1 from Denmark, 1 Japanese, 1 Norwegian, & 1 Slovakian. 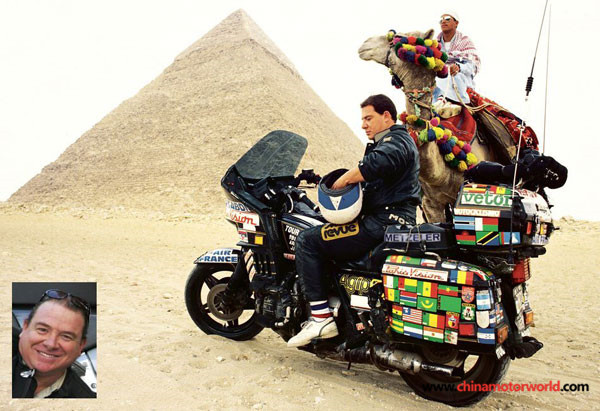 One of my favorite travelers was Kanichi Fujiwara from Japan. He has done 2 major trips so far. His latest was just around his own country of Japan. He drove 100,000 kilometers continuously on a little Honda 50cc Cub. His first trip back from 2004-2008 he did over 50,000 km on a combination of a Yamaha Passol electric scooter, and a Yamaha Majesty 400cc scooter, traveling through Australia, Thailand, India to Scotland, Scandinavia, Africa, and America from New York to San Francisco. Totaling 44 countries! WOW!!! 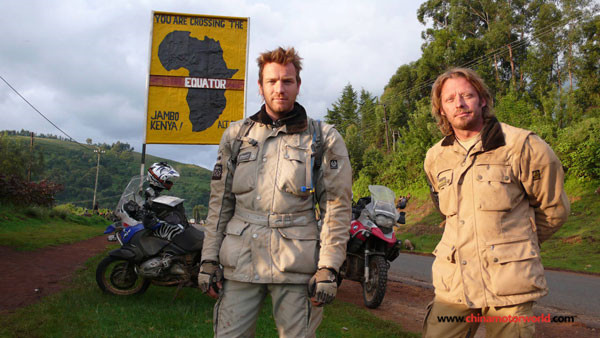 Another favorite is a man named Emilio Scotto from Argentina. Emilio was born in 1956, and is an adventurer, photojournalist, and writer. As of 2009 he holds the Guinness record for the world’s longest motorcycle ride, spanning 10 years, 279 countries and a total distance of 457,000 miles (735,000 km). The ride was done on a 5 year old 1980 Honda Gold Wing GL1100 motorcycle Scotto calls “Black Princess.” Scotto recounted his travels in a 224-page book illustrated with his photographs called, “The Longest Ride: My Ten-Year 500,000 Mile Motorcycle Journey”, published in 2007.

One adventure that really stands out in my mind is the April 2004 Ewan McGregor & Charley Boorman. If you don’t know these names, they are big time movie stars…. That just happen to love motorcycles. They produced a multi DVD documentary called “Long Way Round”. This meaning they began in London England, and headed east, to make their way around the world and back to London again. That for me was the Holy Grail or Bible of motorcycle films. Partly due to the money they put into it, planning, professional crew and much more. Normally I would not be so ready to praise guys for spending so much money on it, or hiring so much help for the trip…. But this was every motorcycle guys dream come true, and they did such a great job for the viewer to get up close and personal with them all along this trip.  It made you feel as though you were there with them. Without the money, and serious camera crew, none of us enthusiasts would ever get to see all that they went through, people they met, tough times, food, places they slept, and so much more. My dream is to do this on a small budget, with a few buddies… and a couple of basic digital cameras. 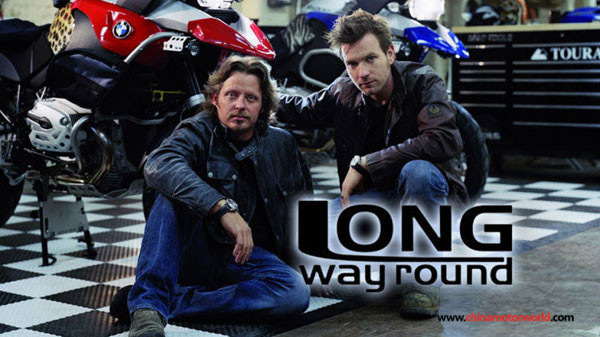 Ewan McGregor & Charley Boorman’s first film was so popular, that in May 2007, they set out to make another adventure documentary, this time called “Long Way Down”. The plan was to begin at the tip of Scotland, and head straight down… wiggling South all the way to South Africa. Basically from the top of the planet, to the bottom this time. This multi DVD film too was a motorcycle cult classic with all the same great detailed fun we all dream of. Just one problem with these films…. Once you start watching, you can’t stop until it is finished…. And it’s long!! The wife kept calling me to come have dinner, and I just kept saying…. Soon Dear, it’s almost finished”. There is a hard cover coffee table book on this 2nd adventure with great photos too.

One of the other recent motorcycle adventurists I was just made aware of, and has been all over the US news is …A very interesting man named Allan Karl from San Diego. I came across Allan on Yahoo news a few months ago. I then noticed he had been gone from 2005-2008. In those 3 years, he had traveled 62,000 mi (100,000 km), 5 Continents, 35 countries, had roughly 2500 meals, and broke a leg in South America.

One of the interesting facts I learned from him was…. In all his travels, he was never robbed, until his bike was back in the US Washington DC customs for 5 days. There they broke open his hard cases, and cut open his soft luggage on the bike, and stole almost everything. All the places he went, and all the people he met, he was always treated like a welcome house guest. Allan too has a book about his 3 year adventure with not only stories, but wonderful photos, and recipes from some of the great food he encountered along the way.

I am still hoping to one day meet up with Ewan McGregor & Charley Boorman, and have a great chat about their time out there on the road. Allan I have been in touch with by e-mail and Facebook…. And we are trying to arrange our busy schedules so we can meet and do a more full story on his trip. Hopefully next month.

I am always up for travel. I have been a traveler all my life. Gambling, Alcohol, Drugs, being a Playboy…. And all the other vises many men have…. I just never cared about. My addiction was always….. Save my money, pull out the passport, and go explore a new faraway place. I love to meet new people, eat new foods, and see new places. I also love motorcycles, and so I could see how travel and motorcycles would be so perfect together. I know how I always feel so disappointed when a trip is over…. So wouldn’t it be great if it could just go on month, after month? Every day would be exciting, and full of new experiences that will stay with you for a life time.

Do you have a desire to make a long trip? Have you done one, or are you on one now….I would love to hear from you. Any thoughts or comments…..[email protected]