On June 18th, the cafe racer Alien Creatures SK400-KG, hereinafter referred to as SK400-KG, was released by SENKE in Jiangmen, which is the third model after SK250-K，SK400-K of the Alien Creatures series. SENKE develops and upgrades its product at a high speed. SENKE returned to the motorcycle market in China with enriched product line.

This test ride was jointly completed by two specially invited riders of CHINAMOTOR. Ada, a junior female rider, is a fitness expert. Joann, a Intermediate female rider who likes coffee and floral art. SK400-KG is examined from the perspective of motorcycle beauty.

Futuristic and novel design. SK400-KG originates from alien elements and maximizes simplicity, exaggeration and centrality of the next-generation elements, which brings out a muscle exposed “motorcycle beast” and highlights the purest industrial aesthetic features. SK400-KG, the re-innovation of the street bike, combines British retro style with the unknown 2D elements, which presents a popular modern retro bike.

Elegant retro appearance and comfortable configuration. Ada said that she was amazed by the concrete gray at her first sight of SK400-KG. It is elegant, low-key, simple and restrained. She couldn’t wait to try it seeing the retro round headlight, full body contours and lines, metallic logo engraved on the fuel tank, round rear mirror, the black striped seat cushion and aluminum alloy rear rocker arm.

With a seat height of 760mm and a curb weight of 187kg, it can also be easily controlled by Ada, a junior female rider with a height of 160cm. 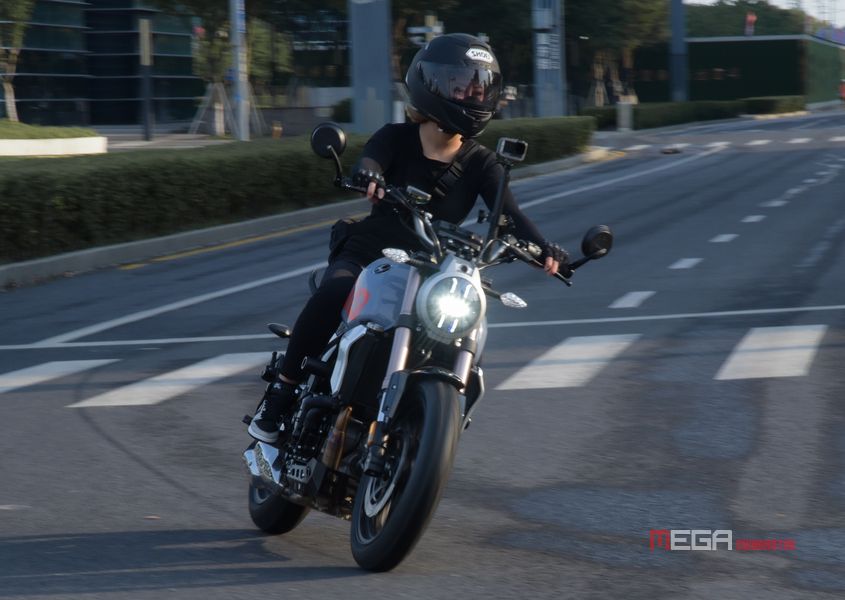 Ada said, “ the riding triangle of this motorcycle was comfortable, and it had a sliding clutch for smooth shifting.The dual-channel ABS ensured safe riding in curves and on water surfaces because of the effective brakes and the expedite acceleration for a female rider.The CNC aluminum tube and the stainless muffler were durable and the sound was powerful, which met my needs of daily urban commute. The cushion was slightly stiffer for the female rider.” 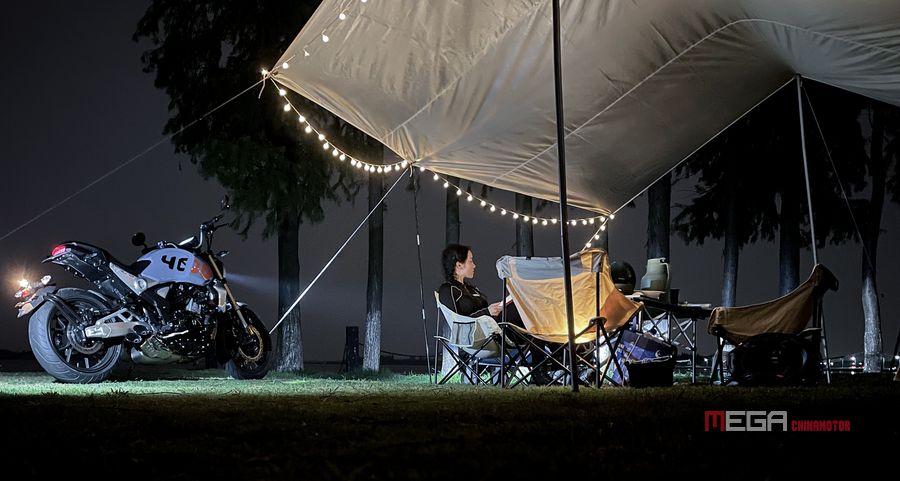 Ada added that she especially liked the retro headlights of SK400-KG. “The main light was composed of half-moon-shaped lens and six LED lights, which was made of advanced high-tech anti-fog materials. The light was clear and bright. In addition, the lights could always be on in the daytime, which ensured the safety of the rider. The lights were also excellent at night, and I found the camera above the headlight can record scenery and ensure my safety during the riding,” Ada said.

Compared with the Junior rider Ada, the intermediate rider Joann talked more about the dynamic performance of the SK400-KG at a high speed. 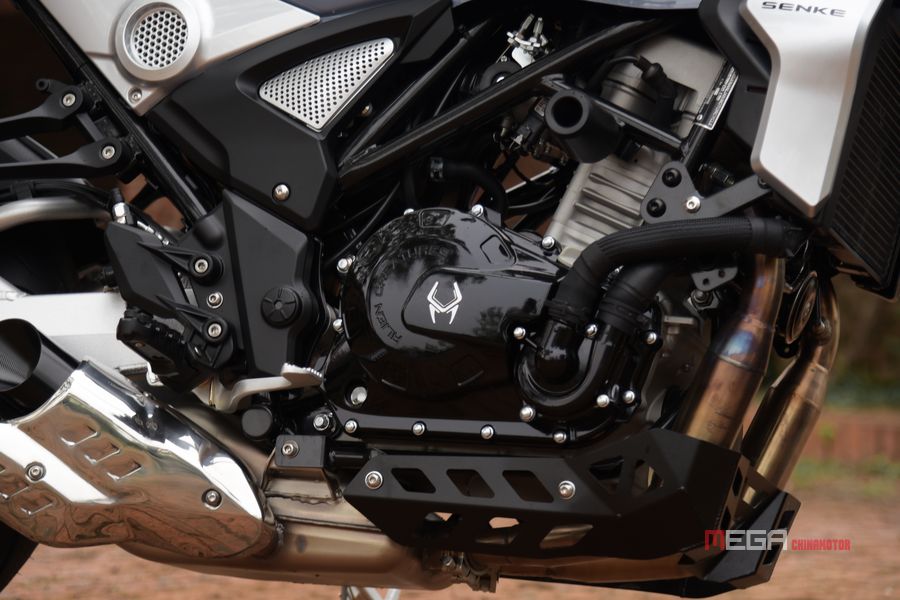 Strong and stable power output and flexible handling. The displacement of SK400-KG is 378cc. It is equipped with an asynchronous two-cylinder water-cooled engine, a maximum power of 26.6kW/9000r/min, a maximum torque of 35N.m/6500r/min, a comprehensive fuel consumption of 3.8L/100km, and a fuel tank of 19L. Therefore, it’s suitable for the long-distance motorcycle travel on weekends. The trellis frame design is perfectly matched with the power of the motorcycle. DEPHI EFI can effectively ensure the continuous output of power. 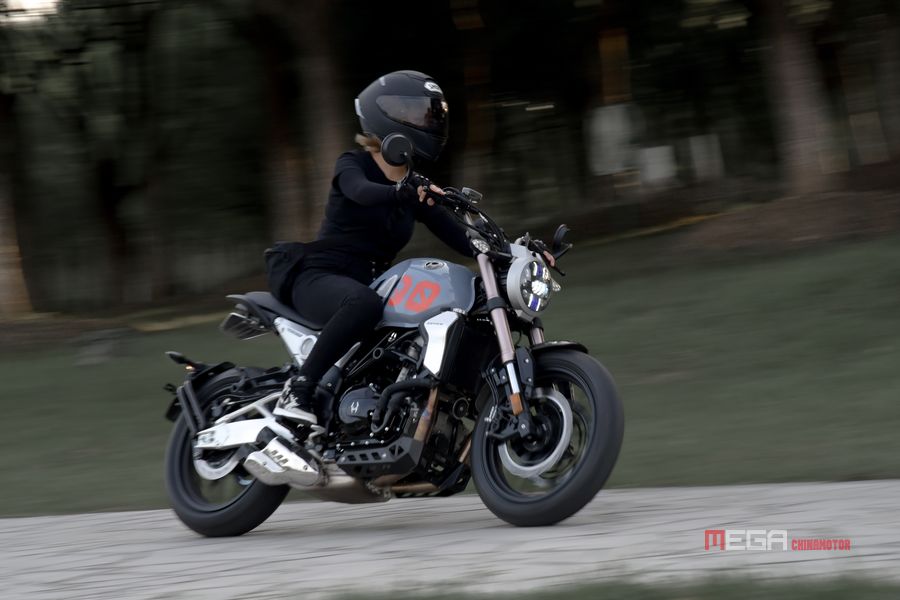 Joann said,“I had only ridden GSX250. Before riding this motorcycle, I was worried that the SK400-KG with the displacement of 387cc would be hard to control. when I rode it, I found that it was very light and easy to control. I am 165cm. And my feet could be completely on the ground when I sat on it, which made me feel relaxed. Moreover,this motorcycle could speed up smoothly and easily go around curves at the speed of 60 km/h. It could be easily up to 100km/h within 6 seconds. Although the sound of the front brake was too loud during high-speed riding, this didn’t affect the perfect experience it brought me. I would take it into consideration if I need buy other cafe racer. After all, it was cost-effective at the price of 26,800 yuan, which was very tempting.” 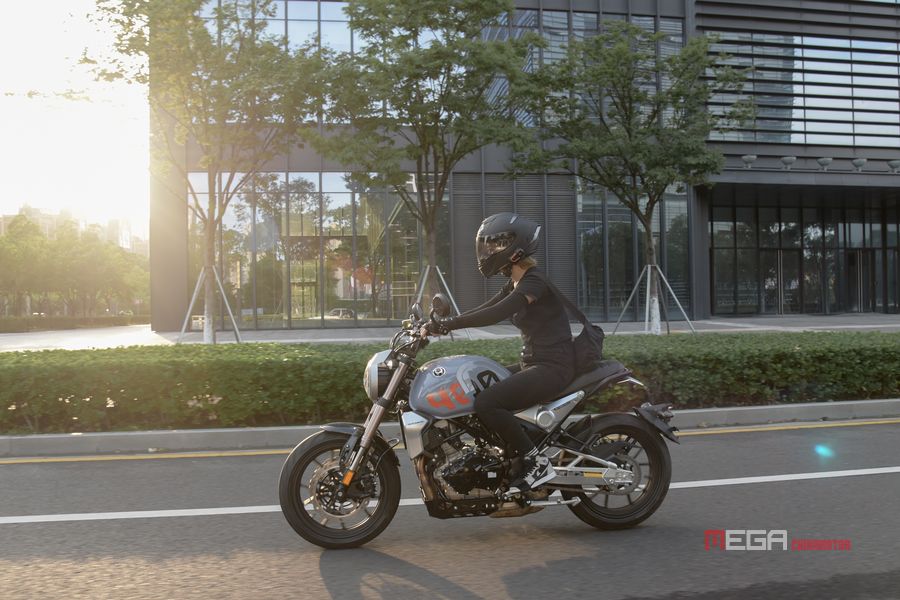 In addition to the test ride of the two female riders, the domestic version of the SK400-KG is equipped with IoT technology intelligent system that integrates functions such as GPS, anti-theft, and intelligent help, which makes riders more worry-free. This system is optional in some countries and regions.

What two riders shares confirms that SENKE creates the motorcycles earnestly. There are very few companies that can successively launch best-selling models in Guangdong, and one of them is SENKE. SENKE has more than 100 patents and has won the Canton Fair Design Awards and China Excellent Industrial Design Award for many times. SK400-KG is the first model after SENKE returns to the Chinese market ten years later. It is also the first global strategic product, which shows its determination to develop the domestic market and its ambition to take the lead in the global market.