September 10, 2020
Posted by: chinamotor
No Comments

Tibet is the holy land for many people. It is the sunniest place, where you can reach the stars. There are countless snow-capped mountains and sacred lakes… People say that a car carries the body, while a motorcycle carries the soul on a trip. DAYANG VOREI was among one of the vehicles that hurried out for this sacred land.

This tour was a bigger challenge for the riders. It started from Haikou, bypassing Nanning, Guiyang, Chengdu, Mangkang, Nyingchi, to Lhasa, and then back from Mangkang, Yunnan, Tibet, Lijiang to kunming, and to Haikou, covering a total distance of nearly 10,000 kilometers.

On the first day, the touring group started from Nangang Port, passed Guangdong-Hainan railway, and crossed the Qiongzhou Strait, with a riding distance of 225 kilometers.

The next day, the team headed to Bai Se. One of the advantages of a big scooter is that it can carry a lot of stuff in the seat bucket. VOREI has a large storage space, especially suitable for motorcycle traveling. After riding for about 700 kilometers, the riders reached the heroic city–Bai Se at 6pm. 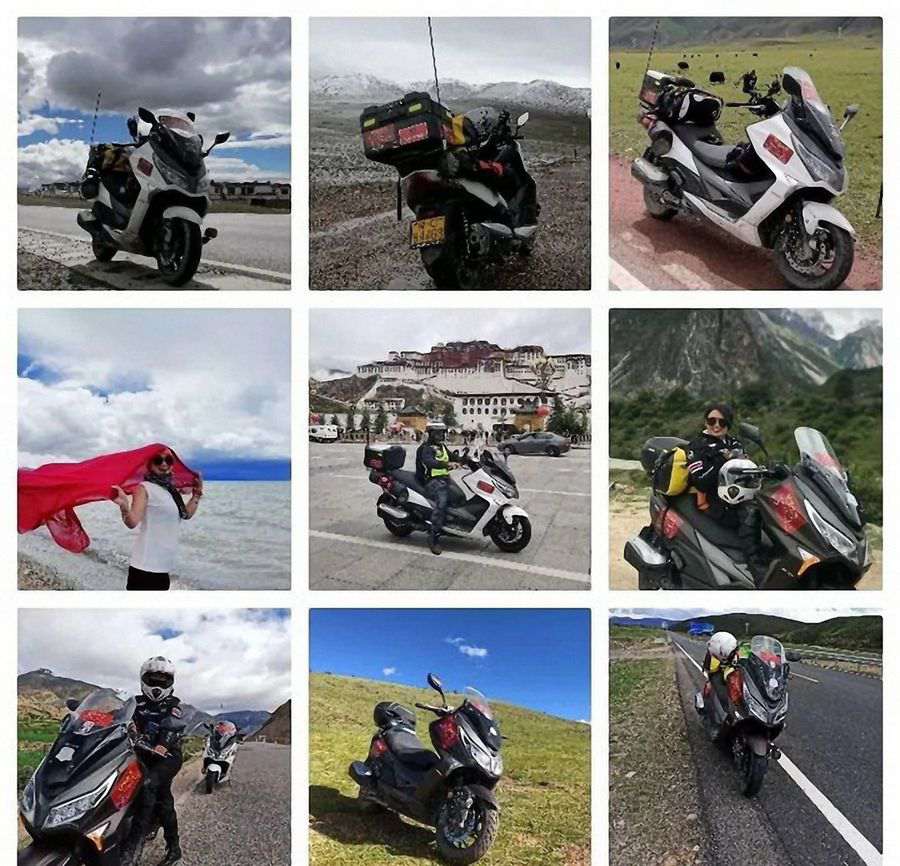 Along the way, VOREI’s performance was awesome, no matter to pass potholes or acceleration. The ride from Hainan to Chengdu was smooth.

After staying in Chengdu for two days, the team started towards the Sichuan-Tibet Line. National Highway 318 starts from People’s Square of Huangpu District, Shanghai, and ends at China-Nepal Friendship Bridge in Nyalam County, Xigaze city, covering a total distance of 5,476 kilometers. The Sichuan-Tibet Line usually refers to the 2,142-kilometer route between Chengdu and Lhasa, which is divided into the southern line 318 and the northern line 317. The southern line starts from Ya’an and crosses the National Highway 108 to the west to cross the Erlang Mountain. The southern Sichuan-Tibet Line is on the 30-degree north latitude and is known as the “Chinese Landscape Avenue”. 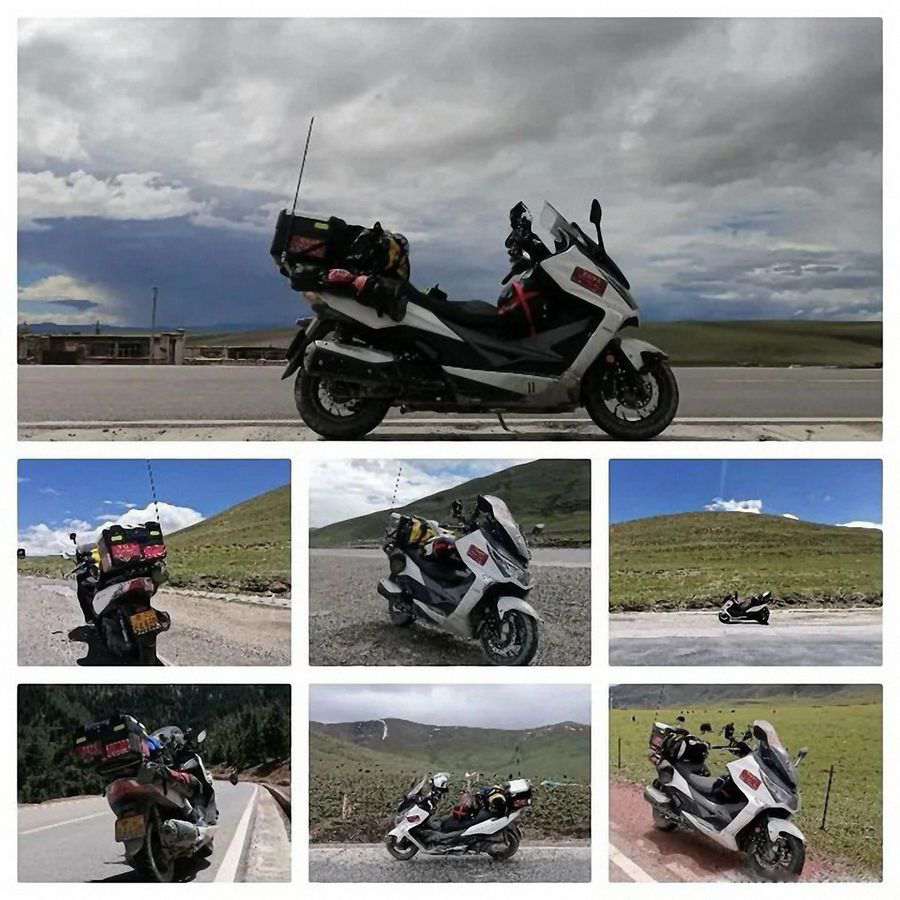 Riding into Tibet along the Sichuan-Tibet highway, the team crossed the mountains, rapids, snow peaks, and vast sea of forests. It left a lifetime memory of unforgettable beauty…

The continuous heavy rain in Sichuan and Xizang was very likely to cause landslides and falling rocks, which brought more uncertainty to the risky touring. Just after leaving Ya’an, the team heard the news that 318 Line had been interrupted. Then, they decided to take the 351 line, running towards Baoxing!

When the team arrived at a Tibetan village, they again heard that the supply along Line 351 was short, so after discussion, they turned back to Line 318. Hold your breath, Line 318 will always bring you surprises and accidents–countless potholes on the road, incapable acceleration, and occasional congestion. 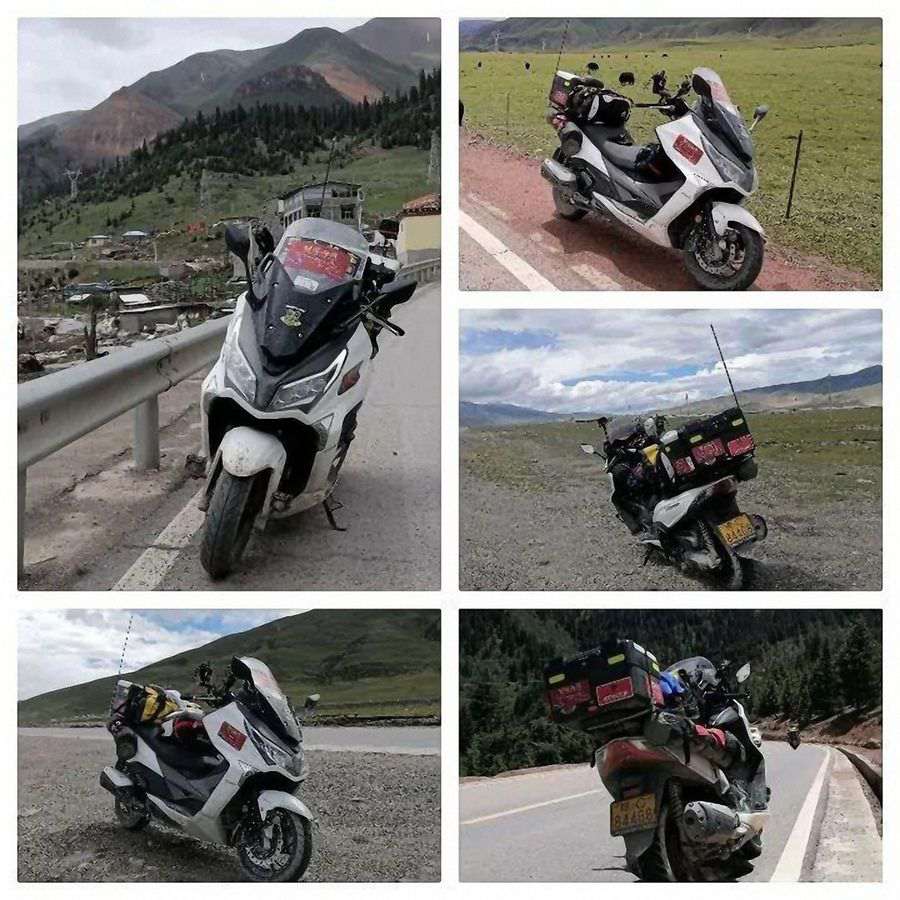 The continuous mountains, coupled with altitude sickness, became a great challenge for riders living in Hainan for years.

Riding at an altitude of more than four thousand meters, the surrounding vegetation is significantly reduced. On the way to Dongda Mountain, the mountain road is no longer winding, but gentle and long, some flowers were nurtured by the moisture of the mountain spring. VOREI became vigorous and energetic again. 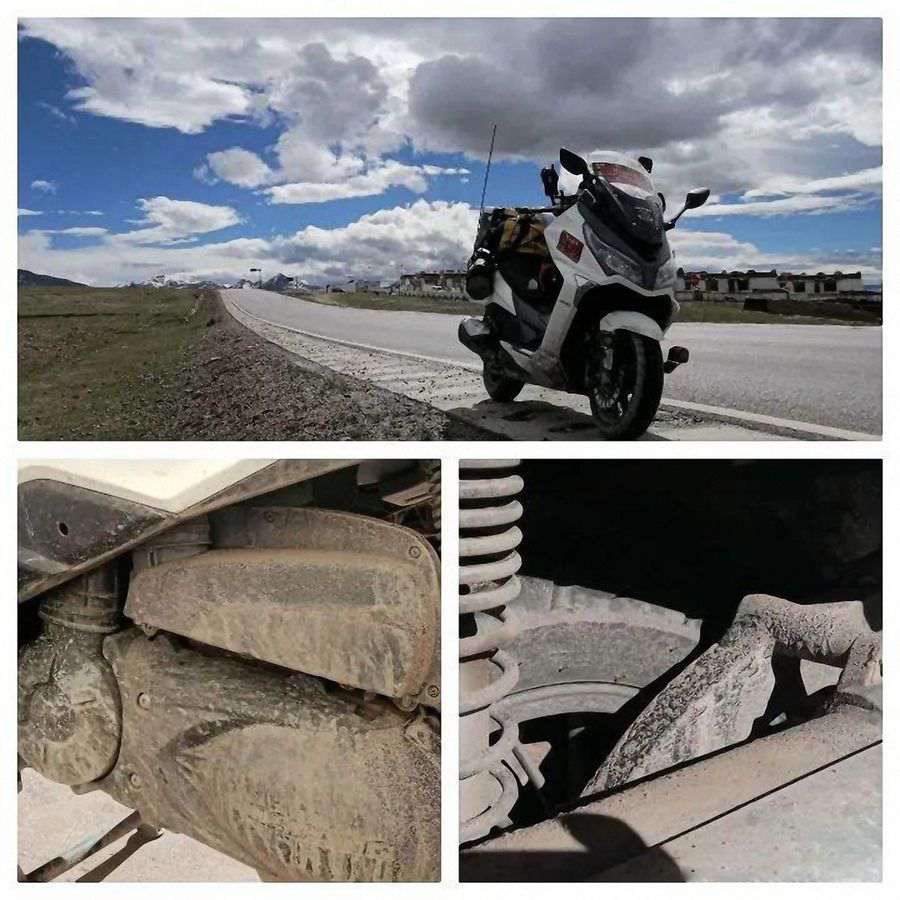 The Hengduan Mountain range is the longest, widest and most typical south-to-north mountain system in China. Located in the southeast of the Qinghai-Tibet Plateau, it is usually the general name of the south-north mountain ranges of the west of Sichuan and Yunnan and the eastern part of the Tibet. The mountain range starts from Qionglai Mountain in the east, arrives at Boxoila Ling in the west, at the line of Qamdo, Ganzi and Malkang in the north, and at the mountainous area on the China-Myanmar border in the south. It meets the Himalayas in The Namjagbarwa peak.

The elevation of Dongda Mountain pass reaches 5,130 meters. As the highest pass on the Sichuan-Tibet line, it is a coordinate in Tibet.

Also known as the “life exclusion zone”, Dongda Mountain, with snow all year round, is a sacred place for mountaineers, with the rushing Lancang River on one side and Zuo Gong on the other.

“72 turns of Nujiang River” refers to the winding road of Yala Mountain (16 km, between Bangda Town and Badu county), of which the mountain pass is 4,651 meters above sea level. It runs along the Nujiang River with steep slopes and dangerous road section, known as “the 99 return bends”, “the 108 turns” of Yila Mountain and “the 99 turns of Sichuan-Tibet Line. Someone ever counted it to contain over 130 bends 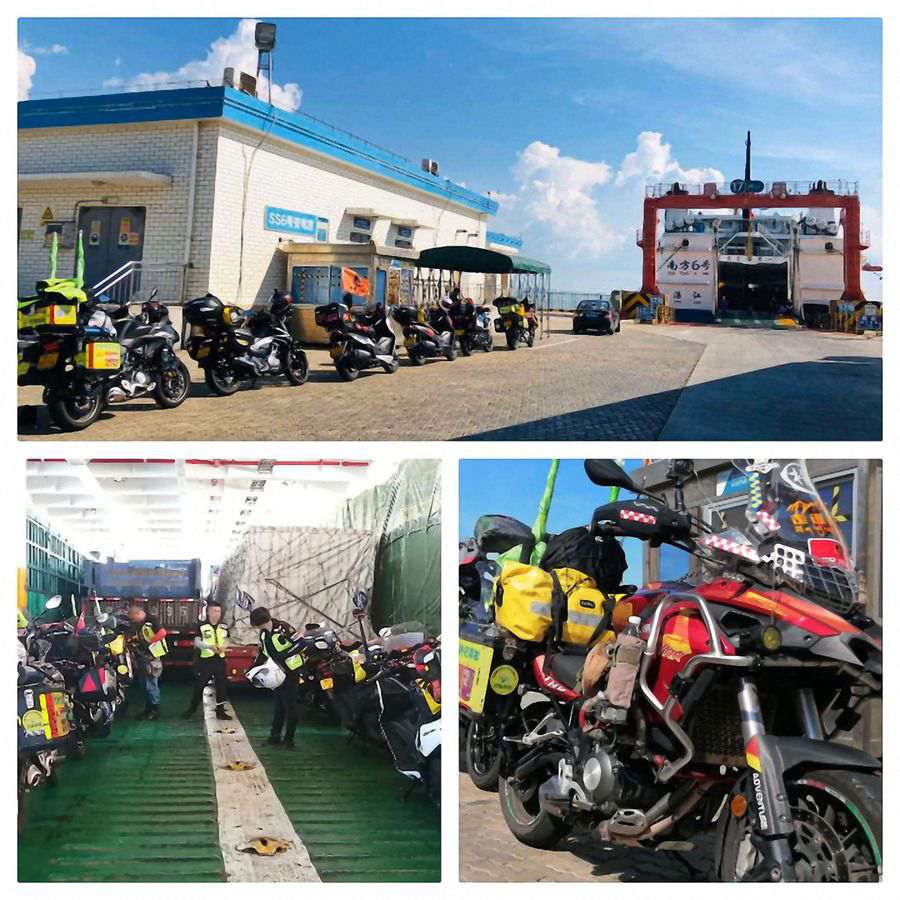 As the only route along the Sichuan-Tibet southern line, for many riders, drivers and vehicles, it is more challenging because of the risks. VOREI surprisingly handled these difficulties with ease. Both the riders and VOREI should be proud of their performance.

Leaving Hainan, VOREI had been running for 3570 km, there was not even a loose screw.

Starting from Badu on the 12th morning, the team followed the upstream of Lengqu River and Purlung Tsangpo River. It was the most beautiful road section on the southern Sichuan-Tibet line.

The pass of Anjura Mountain, at an altitude of 4,475 meters, didn’t feel like a pass since the team had been riding above 3,000 meters. 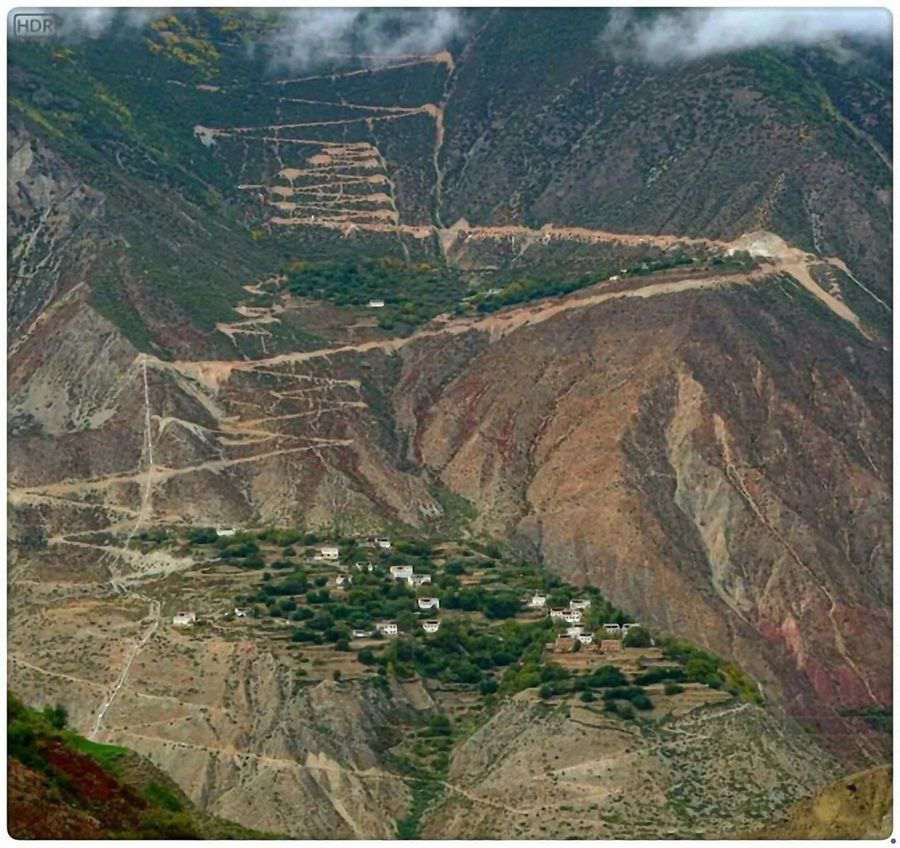 Midui Glacier is located in Mimei and Midui villages, Yupu Town, Bomi County, with an altitude of only 4,600 meters and a terminal elevation of 3,870 meters. The lower part of the glacier, which is one of the three major marine glaciers in China and the most important marine glacier in Tibet, was the mixed forest belt of coniferous-and-broad-leaved forests.

The real Tibet is not in Lhasa, not in the Potala Palace, but on the road. On the Sichuan-Tibet road, you will experience setbacks, learn to be brave, share and grow up.

On the fourteenth day, after riding for over 400 kilometers the team finally reached Lhasa.

VOREI’s 24 days of nearly 10,000 kilometers travel into Tibet, has fully demonstrated the strength of a large displacement scooter. 10,000 kilometers of high altitude plateau, glacier and snow mountains, gun pits, muddy water… all kinds of bad road conditions, VOREI completed the trip without having a screw running loose–you don’t know how reliable the motorcycle is until you have it experience the Tibet trip.

Riding VOREI into Tibet challenged the limit of life while enjoying the beautiful scenery along the way. It felt like a dream. Anyone who has completed such a trip should take it as a matter of pride in his life.