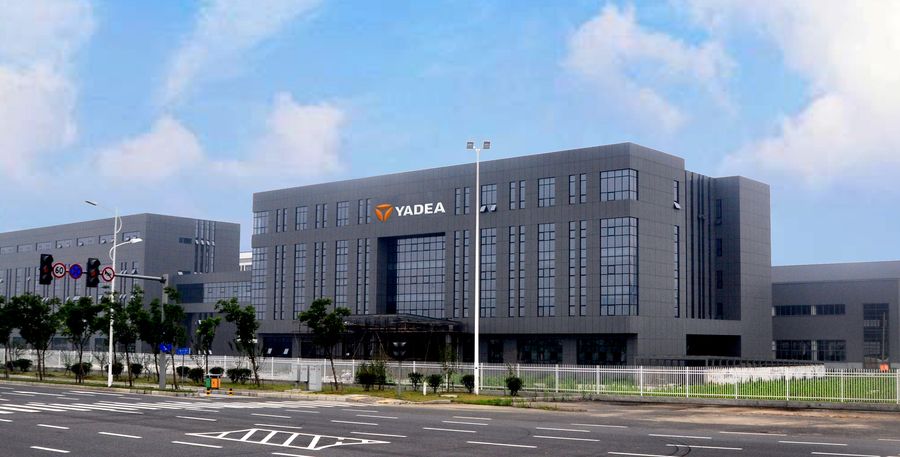 October 20, 2020
Posted by: chinamotor
No Comments YADEA Group has seven production bases in Tianjin, Jiangsu, Zhejiang, Guangdong, Chongqing, Anhui, and Hanoi in Vietnam and an industrial design center, with an annual production capacity of more than 12 million vehicles, annual sales of more than 6 million vehicles, and the sales network covers 83 countries around the world, and the high-end sales have been taking the lead for 15 consecutive years. In 2019, YADEA sold 6.09 million units, with revenue of 11.968 billion yuan. The cumulative number of global users exceeded 36 million, the number of terminal stores reached 20,750, and there were more than 2,000 distributors nationwide, and the channel coverage ranked take the lead in the industry. At present, YADEA group has more than 8000 employees. At the same time, it has promoted the employment of more than 70000 people in upstream and downstream enterprises, driving the industrial chain output value of about 42 billion yuan. while its own development, YADEA actively undertakes social responsibility, devotes itself to public welfare and charity, donates materials and donations to disaster areas, and cares for people’s livelihood. Since its establishment, YADEA has donated about 200 million yuan of various materials to all walks of life.

YADEA has always adhered to the business philosophy of “providing products and services that make consumers felicity”, and has been implementing the “premium e-mobility strategy”, including “better design, more high-tech, better quality, more advanced manufacturing, better service, more exports”, etc., YADEA has become a world-class enterprise, leading the development of the industry. 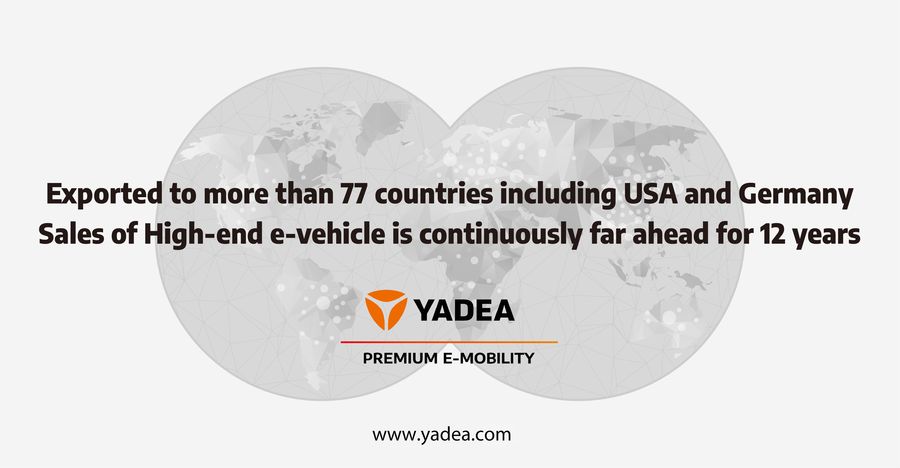 In June, Jiangsu YADEA, the first PRC subsidiary of the Group, was established as Wuxi Dongshi Vehicle Industry Co., Ltd.

On May 19, YADEA was officially listed on the Hong Kong stock exchange at 9:30am, becoming the first stock in the industry and starting a new journey.

On August 26, guests from Germany, Britain, France, Japan, South Korea and other regions gathered to jointly witness the global launch of YADEA Z3, a high-end, smarter electric scooter that sets off a global sales boom.

In September, YADEA participated in the INTERBIKE, making the “Made in China” and environmentally friendly cycling culture shine on the international stage.

On October 8, YADEA participated in the 2016 FE, unveiling the high-end products LS-218, which was jointly developed by YADEA and Lightning Motor, with a speed of up to 352 km/h to stun the industry.

In January, as a representative brand of China’s EV industry, YADEA featured a large scale and good benefits, led the transformation and upgrading of the whole industry, and was honored as the “Most Valuable Brand For Investment in Asia”.

In July, YADEA initiated the first 717 electric bike riding festival, which attracted hundreds of thousands of users from more than 100 cities around the world and set off a worldwide green cycling storm.

On December 25, the global annual sales volume of YADEA exceeded 4,060,030 units, which marked a new high in the electric industry.

On February 8, YADEA was selected to be the official Asian supporter of the FIFA World Cup, marking the two-wheeled electric vehicle’s entry onto the World Cup stage, and the two sides have created a high-end feast of strong alliance.

On March 17, YADEA held a variety show in Hunan Satellite TV’s ace variety “Daily Up”. YADEA G5 made its debut at the silver screen and made its debut in the country. At the same time, it announced the international Hollywood movie star Van Diesel as the YADEA brand ambassador.

On April 27, YADEA became the title supporter of the domestic Futsal game – the 2018 Football Gold Classic, which opened the sports marketing feast of YADEA in an all-round way.

On May 3, YADEA announced its cooperation with Tencent FIFA game to create a large-scale offline carnival activity of “E-sports World Cup”, aiming to deepen the World Cup marketing through E-sports+football+entertainment and bringing Chinese consumers a football feast.

On June 8, relying on the core proprietary technology and cooperation with 16 high-quality suppliers around the world, YADEA launched the “diamond version” quality standard to build five core advantages and optimize the riding experience.

On July 17, with the theme of “cycling makes a better life”, YADEA 717 EV cycling festival was launched, and 77 countries responded to the global green travel boom.

On September 26, the extreme ride of “YADEA Diamond electric vehicle to complete the Sichuan-Tibet line” was officially launched, challenging the worse road conditions and weather in Sichuan and Tibet to prove YADEA’s quality.

On December 15, “City-wide Riding to foresee the future”, YADEA held the city-wide gathering, a carnival that promoted deep interaction between the brand and users.

On December 27, the strategic layout of YADEA was established in Jinzhai, Anhui province, to build the domestic advanced production base of high-end electric vehicles, strengthen the efforts of independent research and development, and apply the concept of smart manufacturing to help YADEA become a world enterprise. In 2018, the global sales volume of YADEA exceeded 5.03 million units, again creating a new industry high and gaining the trust of users in 77 countries.

On February 21, cooperated with RRS Logistics to launch the “521 service system” of EV industry, providing users with door-to-door delivery, free installation and other services.

On March 6, supported the TV show “Flower Road”, strengthening the entertainment marketing, building the ideal lifestyle of young people, and accelerating the process of brand rejuvenation.

On March 17, YADEA cooperated with the talk show “Day Day Up” to hold the super entertainment conference, and officially released YADEA G5.

In March, YADEA signed the international superstar Vin Diesel to be its brand image ambassador, opening a new era of YADEA’s high-end strategy and accelerating the internationalization process.

In May, the new e-scooter carrying the “ECO range-extend system” was unveiled, greatly increasing the cruising range. 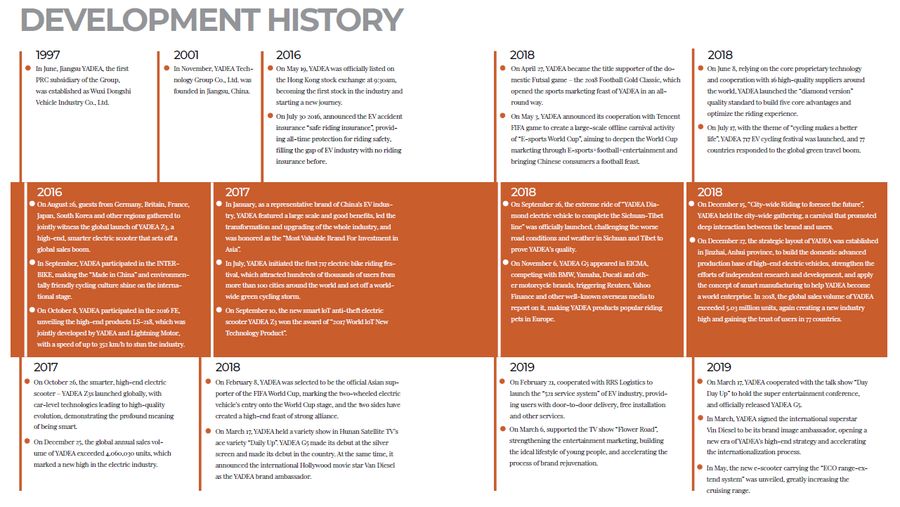 Technological progress has always been the primary driving force for the development of human society, which has been proved by the great improvement of social production efficiency in the past several industrial revolutions. Moreover, with the gradual advent of the Internet of Things, as a representative of green transportation tools, electric vehicles are evolving towards an generally intelligent trend. In November 2018, YADEA’s high-end electric scooter G5 first appeared in the European market (at EICMA), competing with top brands such as Ducati, Harley-Davidson and BMW. It attracted wide attention and was reported by Reuters, Yahoo Finance and many other overseas media. As a representative of “high-end smart lithium battery scooter” category YADEA creates, G5 draws on the advantages of the world’s top suppliers in performance configuration, design process, safety framework and other aspects, delivering the best user experience. 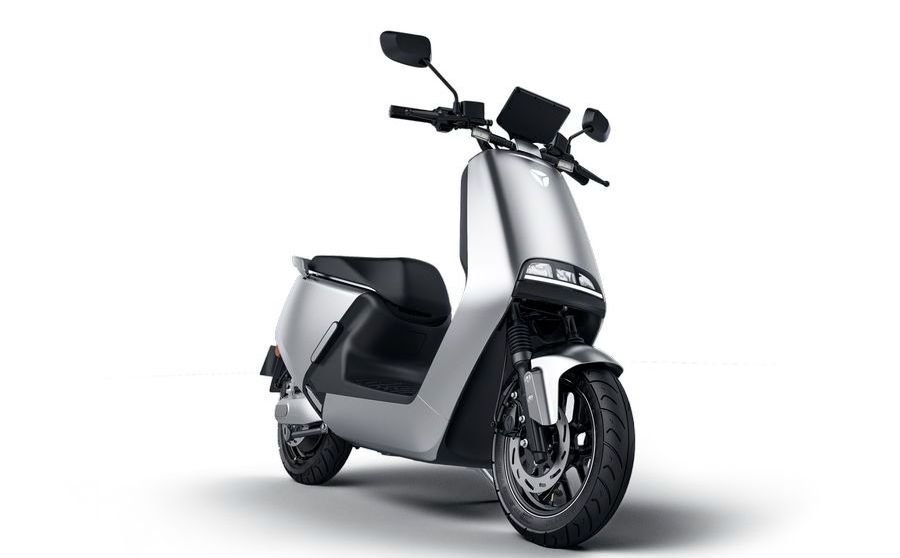 Each of YADEA’s high-end electric two wheelers goes through at least 28 times of spray coating, 1000-level dust-free workshop baking finish, 6,000 kilometers of road test, and a million times of vibration tests. Compared with other scooter of same type, G5’s cold-rolled steel integrated frame, S-grade hydraulic damper, as well as front and rear disc brakes (double pump caliper), ensures its stability and comfort while outperforming most e-scooters on the market in terms of acceleration, handling and flexibility.

The 7-inch HD VA LCD instrument has built-in photosensitive function, which can automatically adjust the brightness according to the environment. From day to night, the scooter status information is clearly seen.

The battery is placed under the pedal, a simple, generous, convenient layout without losing fashion sense, besides, there is enough storage space. The battery pack of the same size is optional with 60V26Ah and 60V32Ah lithium battery sets.

Electric two-wheelers generally have no storage function because of the battery under the seat bucket. However, G5’s battery is wisely designed at the foot pedal, the storage space under the seat is large (26L) enough to contain a full-face helmet.

G5’s battery adopts the new generation Panasonic 18650 power cell ( the same level as Tesla) and is integrated with Panasonic-certified battery PACK technology and a BMS. The standard battery pack weighs only 8.4kg, has a cycle life of 800 times and a maximum cruising range of 120km. In addition, it is driven by the GTR3.0 high-performance broadband motor independently developed by YADEA, with a maximum output of 2.1KW. Combined with a FOC, the scooter has created the advantages of strong power, long cruising range, high energy efficiency and a long service life, which allows the users to enjoy a stable riding experience during continuous acceleration.

G5 uses LED lighting. The headlamp is at a low position, which is conducive to riding in the night.

The highly elastic polyurethane foam saddle is comfortable, which can relieve of stiffness or pain on the back after long-time riding.

The rear warning logo is a cool, practical design, which ensures that the rider gives adequate safety warnings while riding on a motorway.

In addition, according to the introduction of overseas market director, YADEA will launch G5’s double battery version, central motor version and takeaway-delivery purpose version to meet the needs of different markets and users. As YADEA’s mission is to provide consumers around the world with products of happiness, G5 not only delivers more excellent comfort and greater satisfaction to users, it also demonstrates to the world the users’ high requirements for life style and quality, which is larger connotation of happiness.