February 26, 2021
Posted by: chinamotor
No Comments

Zhongneng Vehicle Group (ZNEN) was established in June 1988. From humble beginnings as a small factory in a village, the company has grown leaps and bounds, and has developed into a large-scale manufacturer of large displacement motorcycles, scooters, and new energy motorcycles. It has integrated research & development, manufacturing, and domestic and international marketing, and has established a modern industrial park covering an area of 230,000 square meters in the Taizhou Bay New Area. Zhongneng are constantly innovating and are persistently and wholeheartedly pursuing their original goals.

After having come through the baptism in the market, Zhongneng have developed several highly successful independent brands such as the distinguished motorcycle brand “ZNEN”, the innovative scooter brand “MOTOWIN”, and the new energy electric vehicle brand “MODEN”. “A workman must first sharpen his tools if he is to do his work well.” Zhongneng Vehicle Group has conscientiously pursued excellence. At present, they have a well-equipped engine factory, vehicle assembly factory, highly automatic frame stamping and welding factory, dust-free coating factory, and a cable workshop, with an annual output capacity of more than one million vehicles and engines.

In October 2018, Zhongneng Vehicle Group made a strategic plan to acquire a well-knowned European motorcycle brand—MOTO MORINI, which has a history of nearly one hundred years and ranks among the best motorcycles around the world. This is the first time that a Chinese motorcycle company acquired an international world-class motorcycle brand by using the 100% equity route. Zhongneng Vehicle Group has now integrated its domestic research and Italian R&D centers to continuously absorb and optimize MOTO MORINI’s advanced technological achievements, and has established strategic cooperation with Brembo, Marzocchi and other top enterprises in China and Europe, to develop high-end 400cc–1200cc large displacement motorcycle products. 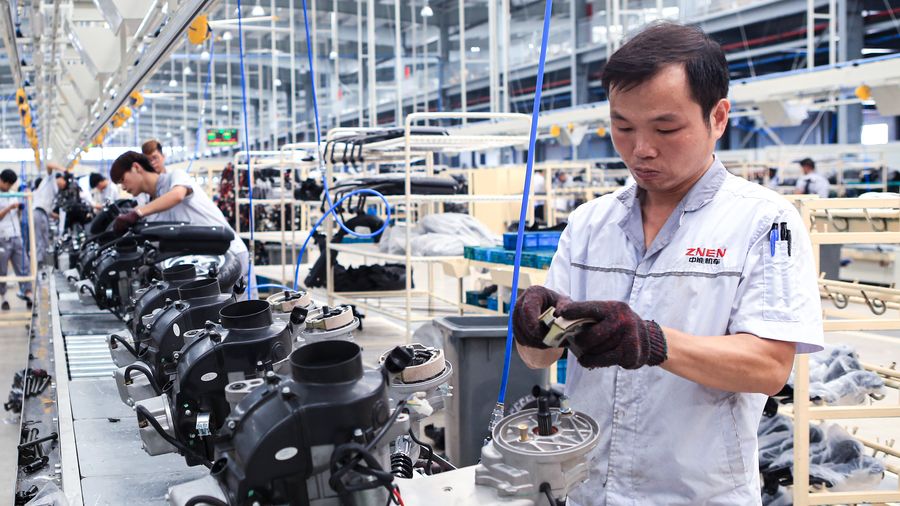 From the time the company was established, the people of Zhongneng Vehicle Group have always been committed to manufacturing high-tech and high-quality products and building a high-quality service team with the spirit of “dedication, perseverance, pragmatism and innovation”. Now, the company has 68 products with EU EEC certification and 52 products with US EPA certification, and has more than 20 independently developed patents. The “ZNEN” trademark has been registered in 32 countries around the world, and the products are exported to more than 100 countries and regions, with Europe and the United States accounting for more than 50% of the international sales. 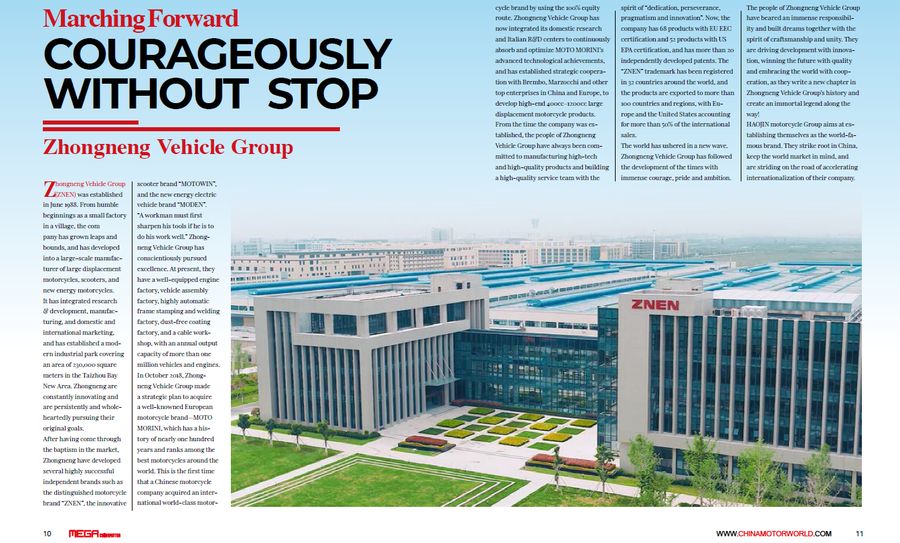 Over the past 30 years, a group of passionate entrepreneurs, possessing great vision, put their blood and sweat into building and taking this company to new heights. The journey of three decades has seen the sparks of innovation grow brighter as this group of dedicated entrepreneurs overcame every difficulty and blazed new trials.

Moto Morini participated in the EICMA exhibition for the first time with new products after being reorganized, and launched four new models: Super scrabbler, X-cape, Milano and Seiemmezzo（61⁄2）, which won the attention and praise of European professional media and evaluators.

Launched the self-developed classic model “F8”. Since then, a series of new models have been developed, including “Kangaroo” and “Roar”.

Moved into Zhongneng Xinqiao factory, which covers an area of 86,000㎡. The new model “F9” was launched. 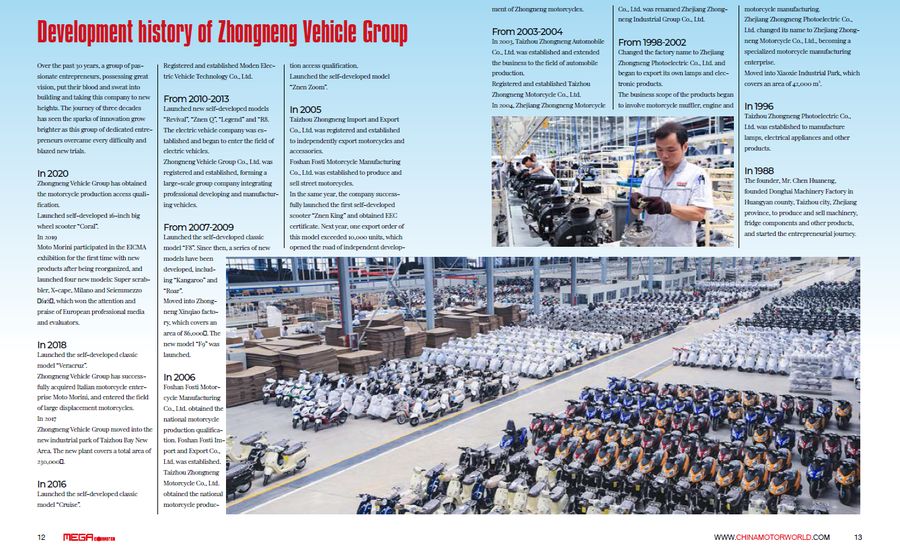 In the same year, the company successfully launched the first self-developed scooter “Znen King” and obtained EEC certificate. Next year, one export order of this model exceeded 10,000 units, which opened the road of independent development of Zhongneng motorcycles.

In 2003, Taizhou Zhongneng Automobile Co., Ltd. was established and extended the business to the field of automobile production.

Changed the factory name to Zhejiang Zhongneng Photoelectric Co., Ltd. and began to export its own lamps and electronic products.

The business scope of the products began to involve motorcycle muffler, engine and motorcycle manufacturing.

Moved into Xiaoxie Industrial Park, which covers an area of 42,000㎡.