December 12, 2019
Posted by: chinamotor
No Comments

ZONTES is a fast-risingbrand in China. The brand is willing to modify the subsequent models according to consumers’ demands, and independently develops and produces accessories to guarantee the quality. The ZONTES’s 310 series more mature than the 250 series, and 310T is the third model of 310 series.
310T has two editions:
Urban edition: front and rear 17-inch aluminum wheel rims, optional with 795mm and 830mm seat heights
Spoked ADV edition: front 17-inch and rear 19-inch spoked wheels, 830mm seat height An urban edition 310T was tested this time (830mm seat height). 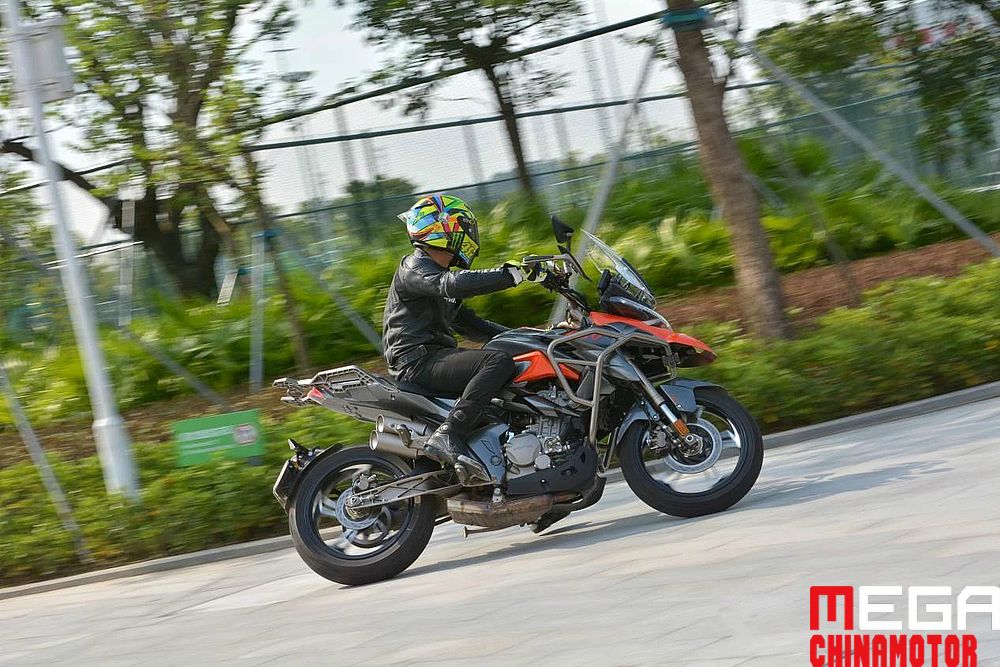 310T ADV has the most complicated wiring and details. The front part is given the most complex design – with seamed parts, a bird’s beak, and a high windshield.

310T uses LED lights: four fish-eye headlight lamps, four LED turn lights, the cost and brightness of which are improved.
The LCD meter gives gear position and water temperature dis-play. The meter is not so recognizable, maybe a combination meterwith LCD and pointer is better. The keyless start is sensi-tive within 1.5 meters. 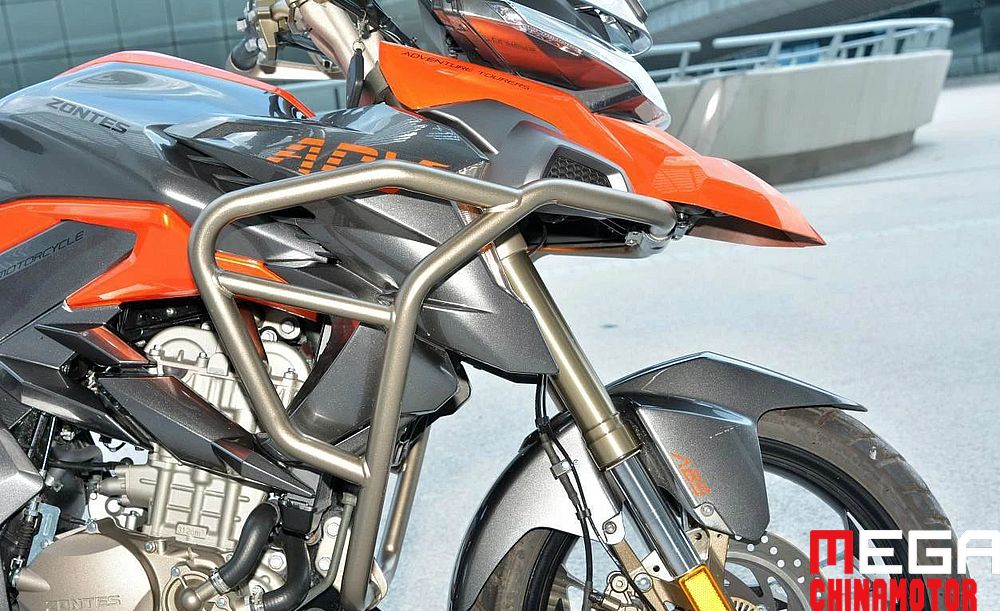 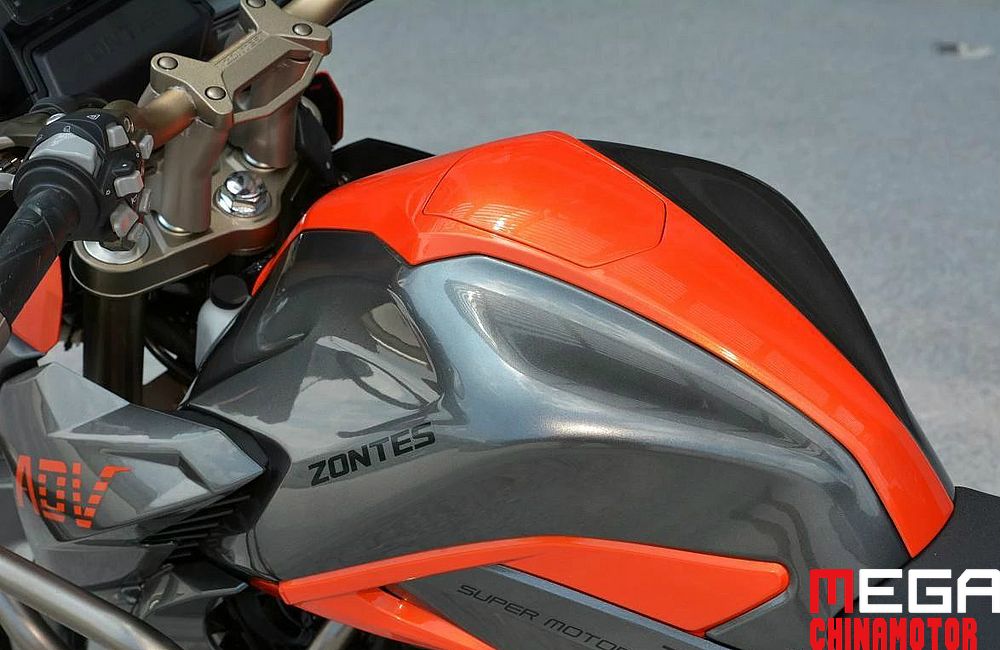 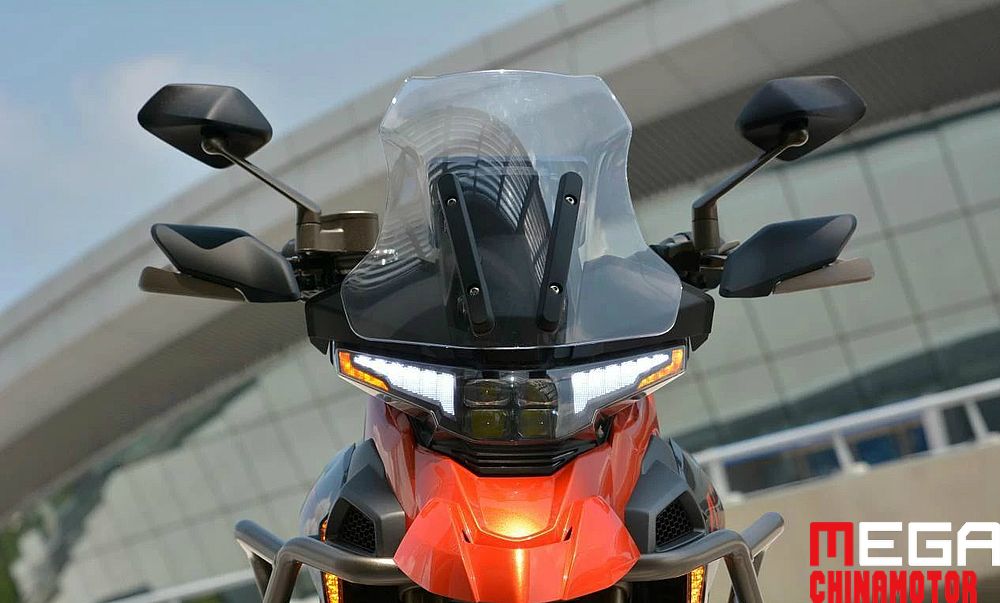 The left and right handlebar assembly is designed with buttons controlling the high/low beam, overtaking light, ABS, electric fuel tank lock, and the electric windshield. An additional button that opens the cushion is designed on the right side. There is also an ECO control button.
The original protection bar is something special. The protection equipment is normally fixed on the frame, if the frame lacks rigidity, it is easy to be deformed when the motorcycle falls. However, Contestant designersget off the beaten track: the protection bar is not tightly locked on the frame, it is wrapped in plastic at the middle. This soft space will maximumly dis-charge the impact force. 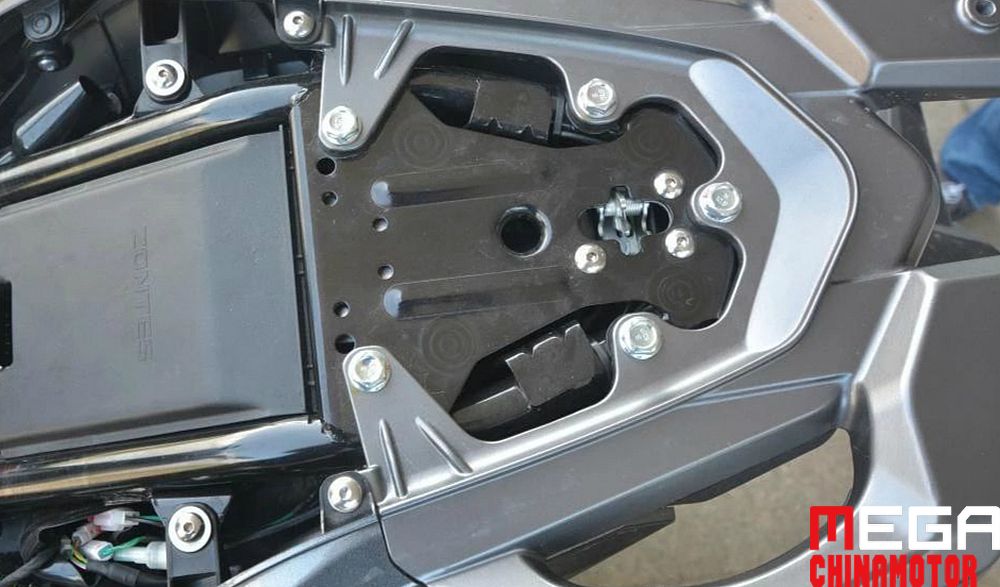 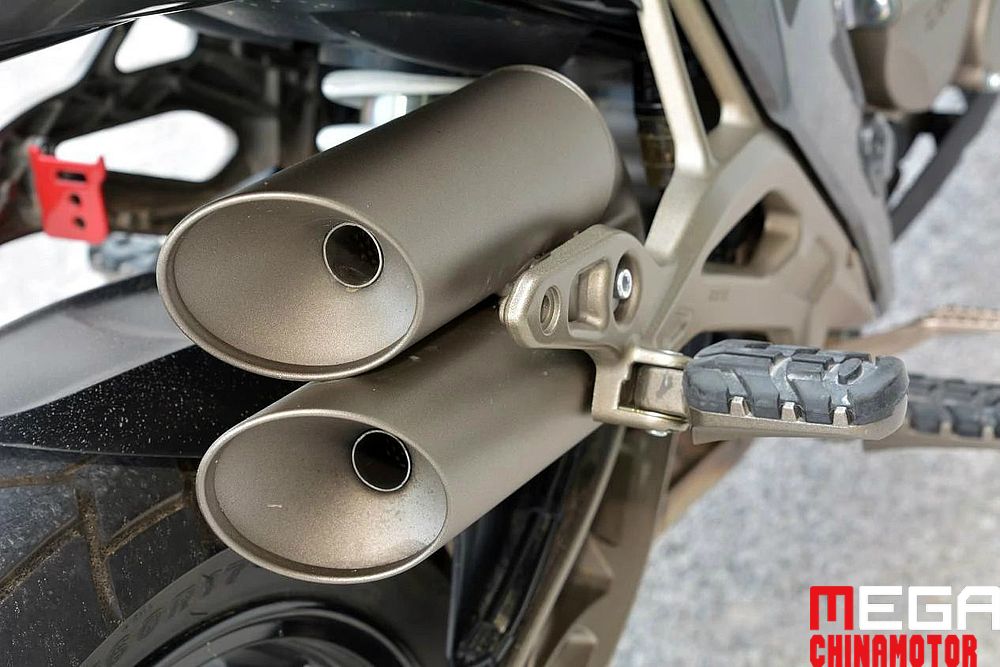 The saddle is wider than that of 310X. It is properly cushioned. The exhaust is properly designed at the bottom of the motor-cycle, reducing the temperature of the exhaust pipe

Compared with 310X, 310T has been modified on the following parts.
First, to ensure its loading capability, the auxiliary frame is reinforced and lengthened.
Second, the front shock absorber is longer.
Third, aluminium alloy parts are added to the handguard and pro-tection bar.
Fourth, the ground clearance reaches 186mm.
310T is equipped with double-piston and single disc front brake and Bosch ABS system. It uses inverted fork and pre-load adjust-able rear shock absorber.
The test model has the same 17-inch aluminiumalloy wheel rim as 310X, matched with pineapple tires. This is not a pure off-road tire, but something between the street and ADV.

Start from: 375km
End at: 431km
Road complex: urban street, high speed motorway, off-road
The officially claimed fuel consumption is 3.2L/100km, while the actually measured fuel consumption is about 3.6L/100km. With a full fill of a 15L fuel tank, the motorcycle canrun a distanceabout 400km, which is not bad. 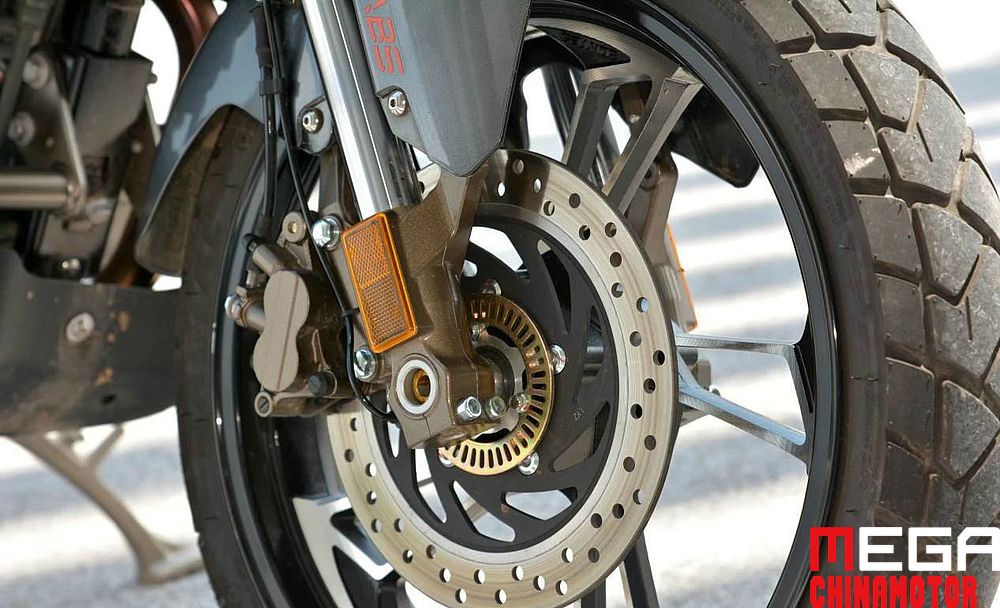 The tested modelhas a seat height of 830mm, and a rider of 1.75m is able to completelytouch the ground on both feet.
The riding posture is comfortable.
310T’s engine, seen from theofficial data and the accel-eration tests, is up to the domestic excellence standard. The 300cc engine,with a high compression ratio, gen-eratesa top power of 26kw. The vibration is not obvi-ous before 6000rpm, but it intensifies as the rev further increases. However, the hand does not feel so much vibration as on 310X.
80 to 100km/h is a normal speed range on the nation-al or provincial highway. 310T can reach 100km/h at 9,000rpm in third gear, when you hear engine roaring. When it is switched to 6th gear, then engine staysstable under 6,000rpm. 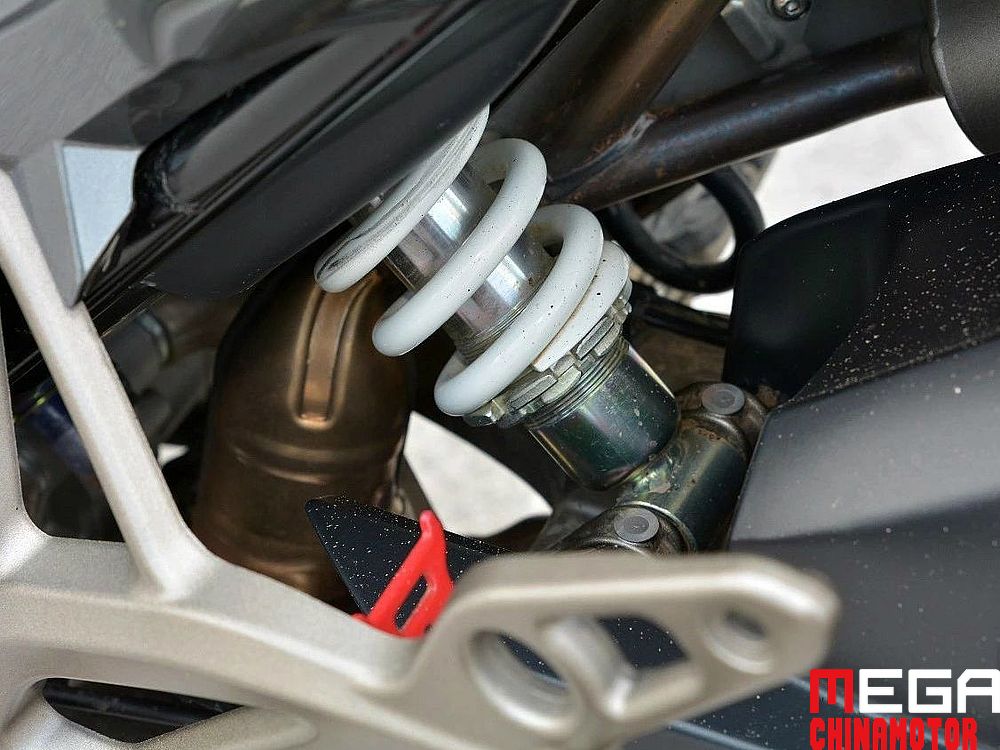 In addition, while testing the output at low gear and low torque, the throttle is not so linear, which can be felt ob-viously during busy traffic.
The handling of clutch, brake, and gear-shifting are all good.

310T is more powerfulcompared to the two-cylinder ADVsin the market. In addition to the small electronic systems, its paint and welding quality is comparable to-that of imported products. Since the launch of ZONTES, its product series are indeed made withgood details and quality. The after sales work is well done. ZONTES is a responsible, self-motivated, creative domestic brand. Looking forward to their larger-displacement products in the future. (Source: www.i-motor.com.cn) 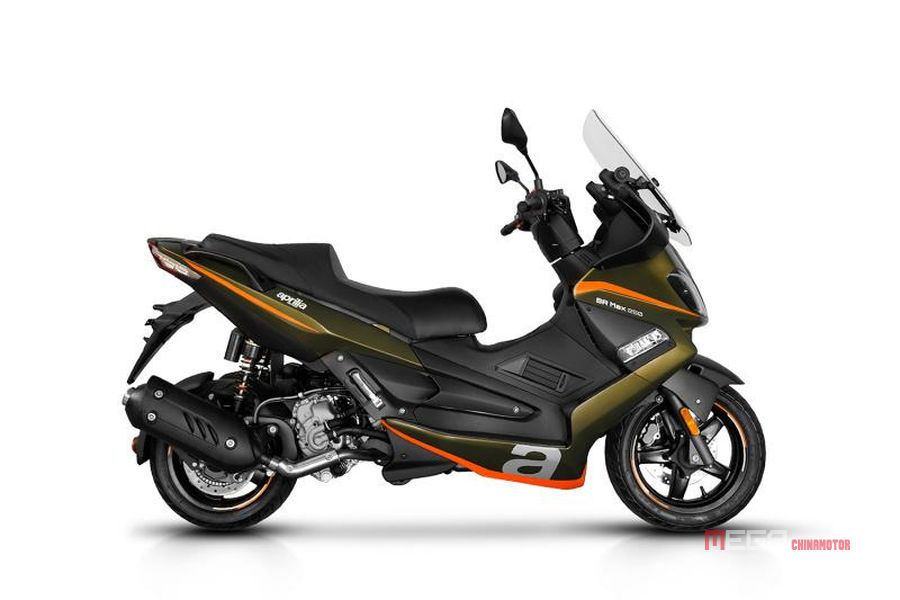 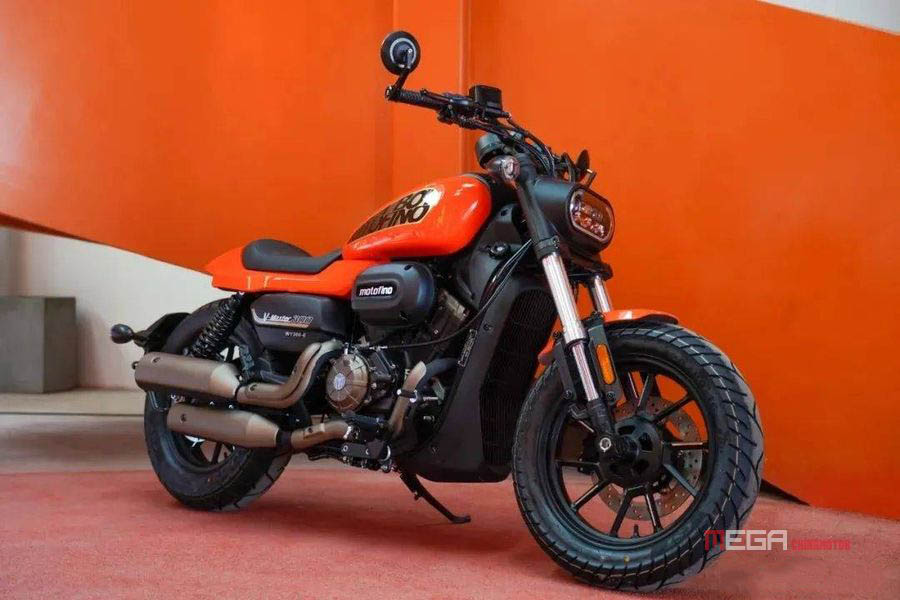