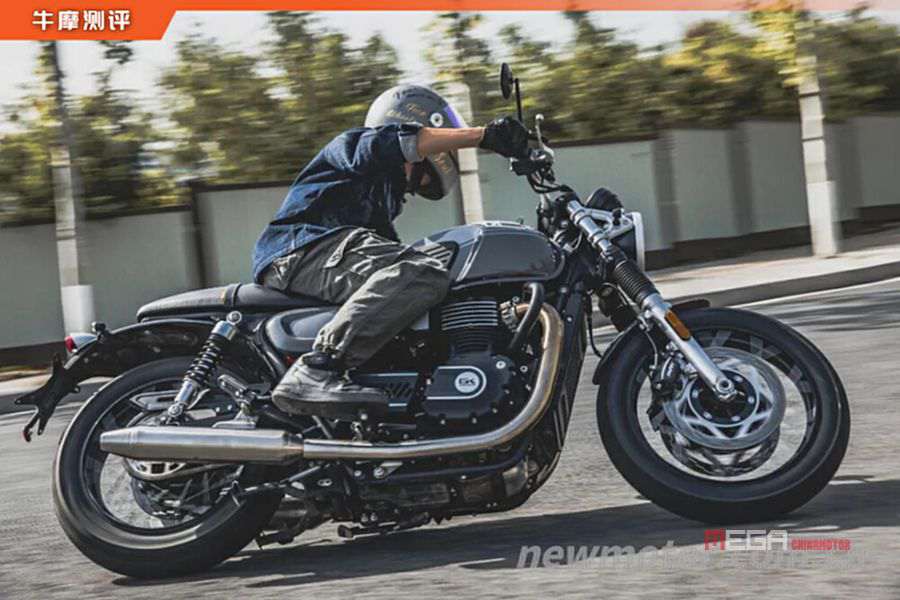 Would it be impractical to add “domestic”after the concepts of “1000cc engine”, “electronic throttle”, “traction control” and “cruise control”? Now Gaokin has made it a reality!

The GK500 has shown us the ideal state of combining top-notch design with superb craftsmanship. GK1200’s appearance is still designed by Brixton, and Gaokin is responsible for the overall R&D and manufacturing. It is not too much to say that GK1200 is “the ceiling of domestic retro bikes”. The body size (2180*800*1115mm) and overall outline make people think of Triumph T120(2170*785*1000mm) with similar style. However, there is no plagiarism or homage. Retro bikes always have similar exterior designs. The point is whether they have their own characteristics.

Gaokin emphasizes the metallic lines of the body, and has impressive brand marks, which has been continued from GK500 series.

Considering that it has only been two years since Gaokin released its first product, it is not fair to compare it with Triumph, or it is a substantial brand to be compared with Triumph.

The test ride GK1200 is in gray paint. The headlight continues the modeling of GK500 series, the English “BRIXTON” on the middle decorative strip creates a European retro tonality. The tank is cleverly decorated with the metal buoy brand logo with nickel plating surface treatment. Compared with the traditional round retro tanks, GK1200’s tank is made with sharp lines. The rubber pad is very practical, which can isolate vibration and prevent paint damage.

The user-friendly elements of GK series are also shown in many parts of the GK1200 . The foldable key with anti-theft chip is convenient to use. The suede material bring great comfort. The fuel tank outline is also made to facilitate riding of shorter users. To eliminate users’concern of use in rainy days, GK1200’s cushion has an internal waterproof membrane to avoid the foam from absorbing water. But the user still need to wipe the surface water droplets to play the waterproof effect.

The aluminum double exhausts are also a highlight. The instrument is not a big one, but offers the economic and sports modes to display adequate data. Visibility is slightly impaired under direct sunlight, and not a big problem for experienced riders.

Overall, GK1200’s exterior texture and details are at superior levels, comparable to imported products. But there is room for improvement. Taking the brake oil can as an example, the square oil can does not go well with GK1200’s overall style. We learned from Gaokin that the reason why such an oil can is retained is that there was not enough time for Nissin to redesign it. 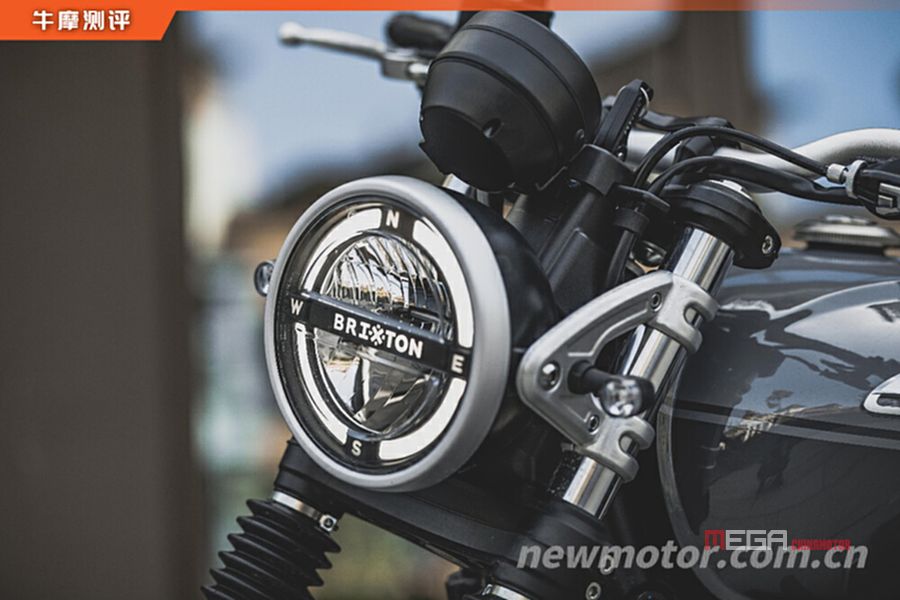 The GK1200’s biggest core configuration is, of course, the 1222cc side-by-side twin-cylinder engine. It produces a maximum power of 61KW at 6550rpm and a maximum torque of 108N. m at 3100rpm. Thanks to the use of a large number of aluminum alloy forgings, the weight is only increased by 45kg on the basis of GK500, while the weight added by the engine is nearly 40kg.

In addition, GK1200 has an engine low temperature protection device. Generally speaking, the rev is limited within 3000rpm when the engine is just started. As the temperature rises and crankshaft bearing and other parts are fully lubricated, it will automatically free to reduce the wear of the engine internal parts. It’s not a new technology, but it’s the first time it’s been applied to a big domestic motorcycle. It can effectively protect the motorcycle when it runs at high revs.

The handlebar buttons are very simple and clear. The cruise control button is on the left (when the speed is greater than 40km/h, press the button to enable the function, which will be automatically relieved when applying the brake). It offers standard ECO/SPORT modes (press the switch button by 2 to 3 seconds, the UI images will also change). The traction control button is on the right side (after pressing the traction control button, the instrument keeps flashing, and the ASR is turned off).

Gk1200 has front vertical 41mm shock absorber with a dust-proof rubber sleeve, and rear preload adjustable double-tube spring shock absorber. They are KYB shock absorbers. For the domestic version, Gaokin adjusted it to have softer suspension to suit majority of Chinese users, while harder on the European version.

It adopts Pirelli vacuum spoked wheels, front 100/90-18 and rear 150/70-17, which not only ensures super impact resistance, reduces the weight of the travelling system, but also facilitates tire replacement or repair. However, the export version is provided with central spoked wheels (which need glue processing before installation). The cost of side spoked hubs is much higher than the central spoked hubs. 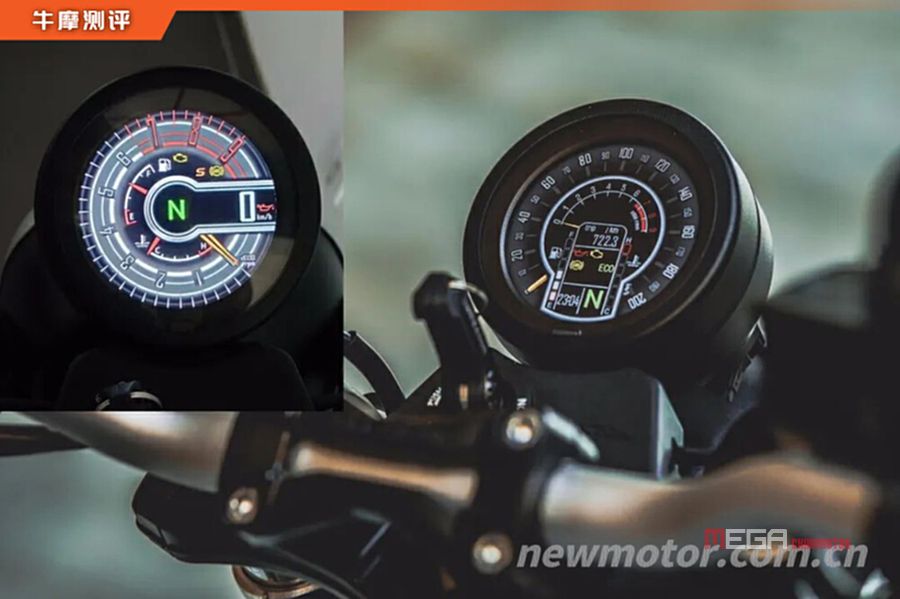 The headlamp bracket does not use the inverted triangle design for mass production to ensure stability.

The water tank and engine cover can cope with more severe riding scenarios. The air cooling fins and carburetor-aping decorative board highlight GK1200’s metal texture and retro tonality. The protective bar (optional for the European version) is designed with a separate lug at the connection with the frame, so as to ensure maximum protection of people and the vehicle in the case of strong impact while not causing damage to the frame.

Removing the decorative cover, you can see the electronic throttle, battery and rectifier. The interior layout is compact. All the tubes, wires, and plugins are fixed in specified positions.

At present, there are two ways to achieve traction control. The first way is to adjust ignition angle or reduce fuel supply or even cut off fuel to reduce torque. The second way is to accurately control throttle opening and closing to achieve accurate torque drop. GK1200 is equipped with MARELLI TCS, making it the only domestic model that adopts the second way for traction control. 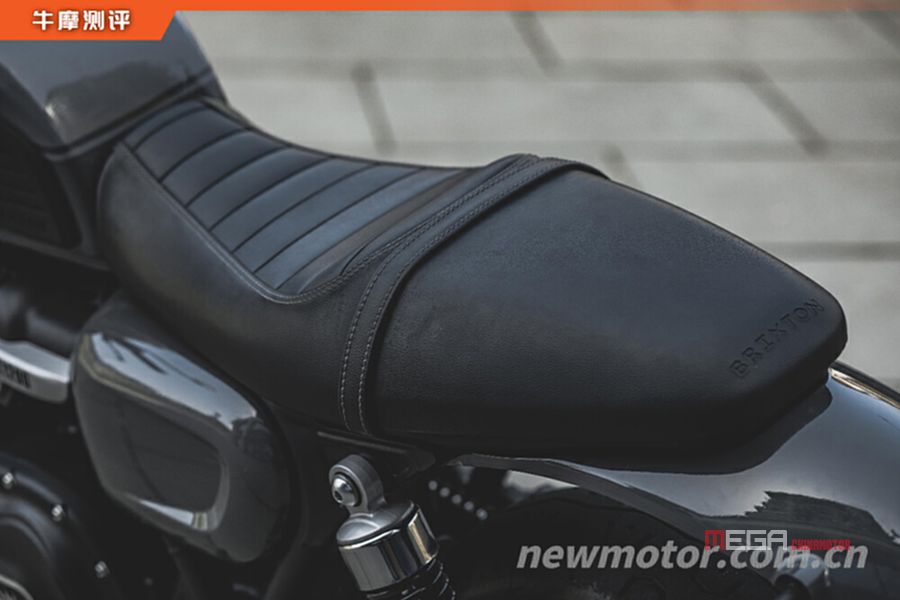 The frame uses a large number of integrated casting. The welding points of the steering column, rear fork, and tail support have gone through precision boring treatment, improving accuracy and effectively reducing the surface roughness. Soft connection between the main frame and sub-frame can effectively reduce vibration and improve riding comfort.

The spot welding of the whole frame is completed by robot, with quality screws used at the connections. The manufacturer carefully considered the actual use scenes, and designed dustproof rubber covers where necessary. There are many other details about GK1200 that will surprise you.

GK1200 represents the first grade manufacturing process of domestic recreational big motorcycles. I can give 8.5 out 10 for this motorcycle. Going from an 8.5 to a 9 or 10 is much harder than going from a 0 to an 8.5, but that’s what Gaokin is trying to accomplish. 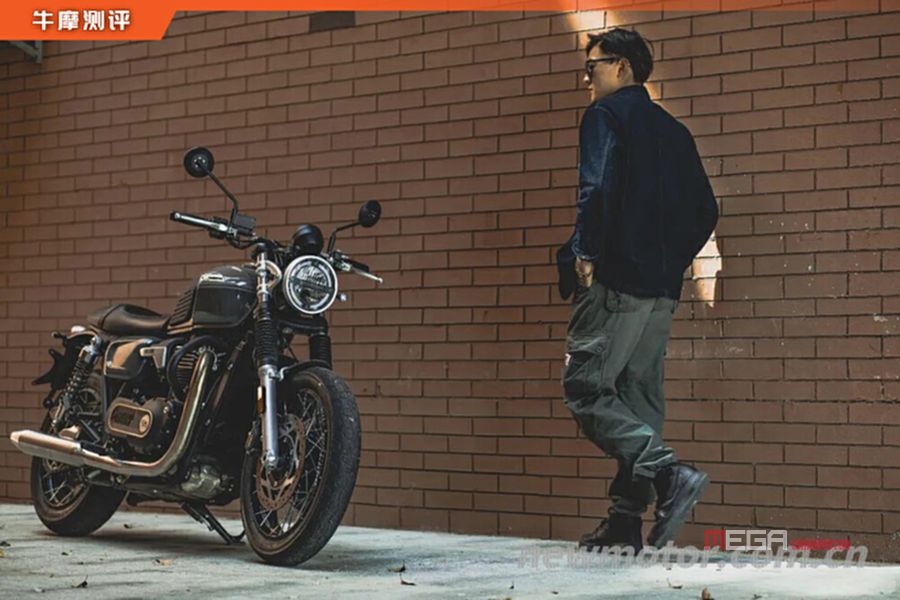