Time has changed. Motorcycle is no longer a simple means of transportation, and motorcycle travel has become a most popular topic. Naturally, a large number of motorcycle companies have focused on the demands of user mobility to launch many tailored new motorcycle models. JINCHENG’s all-terrain JC200 K-CROSS emerges as the time requires and has attracted much attention.

Early in the morning, after a brief start ceremony in Chongqing, two riders set off with K-CROSS. After lunch, the road at the outskirts of Jiangjin District (Chongqing) became wider, and the speed increased. Leaving the outskirts of Jiangjin, the road to Hejiang county was full of twists and turns, typical of the hilly Southwest. Going uphill and downhill, passing corners, K-CROSS completed each mission with ease. It showed advantages of a touring motorcycle.

Then, riding K-CROSS in the rush hours on the way to Jiang’an during the evening, the brakes, clutch and other functional parts had excellent performance. At 8 o’clock in the evening, the two riders arrived at Jiang’an.

The destination was Zhaotong city (Yunnan). The plan was to cross Gongxian county, Gaoxian county and Junlian, pass by the Shunan Bamboo-Sea, and go across the mountains in Yunnan to reach Yanjin county.

The road from Jiang’an to Gaoxian county is an asphalt provincial highway, where K-CROSS gave full play to its power advantage to overtake all the trucks on the road and pass by the bamboo sea.

The southern Sichuan features mountainous and hilly landform. On the winding roads, riders enjoyed the fun of counter steering. The good grip of the Timsun tires enhanced the riders’ riding confidence on the road.

Arriving in Yunnan, the hills turned into mountains, and the riders began to climb up the winding mountain roads. K-CROSS’s gradeability was also commendable. It provided still strong power carrying three full boxes of goods.

There were more turns down the mountain. Thanks to the stable performance of the Timsun tires and the good control, the motorcycle ran steadily even at corners up to 90°. In addition, K-CROSS is also equipped with Bosch 10.0 double channel ABS, providing a higher safety factor. The riders were relieved of worries due to the reliable brakes.

Off the mountain road, they were near Guanhe, and then they arrived at Yanjin.

The plan was to reach Zhaotong by passing the ancient town Doushaguan and the Daguan waterfalls.

Doushaguan known as Shimenguan, is located 22 kilometers southwest of Yanjin county, and is the first dangerous pass from Sichuan to Yunnan in ancient times. Leaving Doushaguan, the riders got on to the national highway 325 to head to the Daguan.

Entering Daguan, they rode onto the secondary road in Zhaoma, with wide lanes and excellent road conditions. The riders speeded up to about 80km/h. K-CROSS’ wheels, which had gone through dynamic balance test before leaving the factory, performed very steadily at high speed.

Climbing along the Zhaoma secondary highway, they finally crossed the nearly 2,000-meter high mountain. K-CROSS did not show any sign of “altitude sickness”, which might be attributed to the new MagnetiMarelliMIU4 closed-loop EFI system. Turning the throttle, the engine roared and eventually raced up the mountain top at 70km/h.

The fourth day of the tour is the most anticipated part of the trip. Dashanbao is located in the west of Shaotong city, only 79 kilometers away from the city, with an average altitude of 3,100-3,140 meters, and an annual average temperature of 6.2→.

The riders started early in the morning to Dashanbao, riding passing Zhaoqiao road, along the first-class highway of Dashanbao to the new township street. The first-class highway is in good road condition. In a section with no speed limit, the riders increased the speed to 120km/h. The motorcycle remains good stability under high speed, and the engine vibration and noise are well controlled.

There was a wider view after passing the mountain pass, lakes and grasslands, blue sky and white clouds forming a most beautiful scenery there. Due to the adjustable front and rear shock absorbers as well as the steel wire spoke wheels, the riders could enjoy a pleasant ride on the bumpy meadow.

One-day rest in Zhaotong. During the two-day riding on the plateau, K-CROSS showed excellent power performance and reliable stability, increasing everyone’s confidence in it.

This was the first day of the return trip. The 6th day had been originally scheduled to cover 200 kilometers from Zhaotong to Hezhang county, Bijie city of Guizhou.

About 100 kilometers of the road section from Zhaotong to Weining county were under construction, with various kinds of mud and potholes. Fortunately, the 142kg (curb weight) K-CROSS plus the three boxes of luggage, weighing less than 170kg, made it easier to pass the bad road.

Around seven o’clock in the evening when darkness enveloped the countryside, the riders turned on the halogen headlights. With good penetration, the road conditions were clearly observed in the foggy night. After receiving upgrades, K-CROSS’ meter shows gear position and ABS alarm. When the headlight is turned on, the meter’s backlight is also turned on, and all the data are clear at a glance, making the riders feel more secure and calm in the dark environment.

On the second day of the return trip, from Hezhang to Chongqing, they needed to pass Yunnan’s Zhenxiong and Weixin counties as well as Sichuan’s Xuyong county and Luzhou city. Going all the way fast they arrived at Xuyong county at 6 p.m.

On the third day of way back, the plan was to arrive in Chongqing, covering a total distance of about 254 kilometers.

It was around 7:30 p.m. when they finally arrived in Chongqing, marking the smooth and successful 1,500km Yunnan-Guizhou tour of JINCHENG JC200 K-CROSS. The stable performance of K-CROSS on the way deserves its nickname of “all-terrain Xiao Gang Pao (refering to compact yet powerful vehicles)”.

The Product Introduction of ZONTES 350GK at the 130th Canton Fair 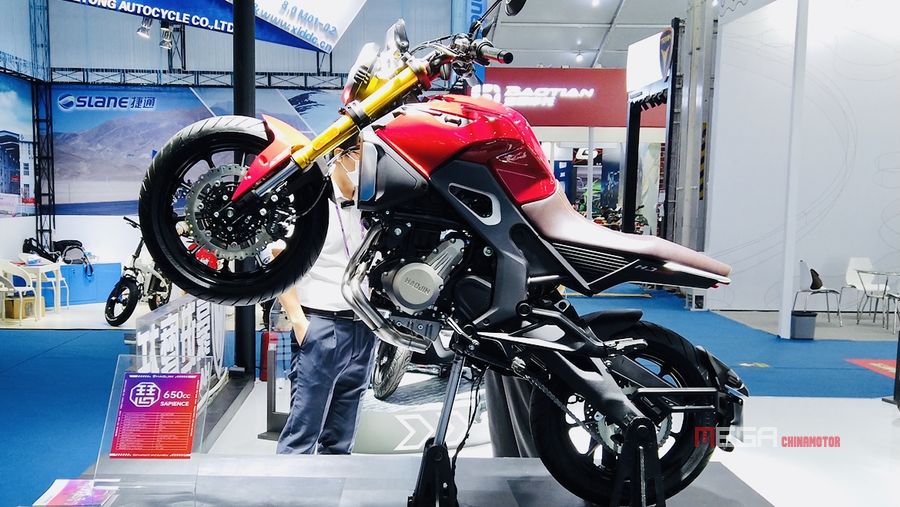 The Product Introduction of HAOJIN 650 at the 130th Canton Fair